By Paul Callister and Robert McLachlan

It’s not easy keeping up with the rapidly changing world of electric aircraft. It can look like a blizzard of breathless media coverage, corporate press releases, animations, venture capital deals, and public offerings.

But as the launch dates creep closer, companies have been releasing more details, which makes it possible to see if the numbers add up.

Leaving aside Jetsons-like flying cars, three high-profile electric aircraft are: Eviation’s Alice and Lilium’s Lilium Jet, both targeting commercial operations in 2024, and Heart Aerospace’s ES-19, targeting 2026. They are all startups, all with clean-sheet designs, and all with substantial funding and order books.

While a lot of new technologies have to come together to make these planes fly, the most crucial part is the battery system. In this article, we’ll use what we know so far about these three aircraft to see if they will deliver as promised.

The range equation for battery electric aircraft is:

Aircraft design is always a matter of compromises. Limitations associated with takeoff, cruise, landing, and range all point in different directions, while the economics depend on payload, speed, and fixed and operating costs for starters. 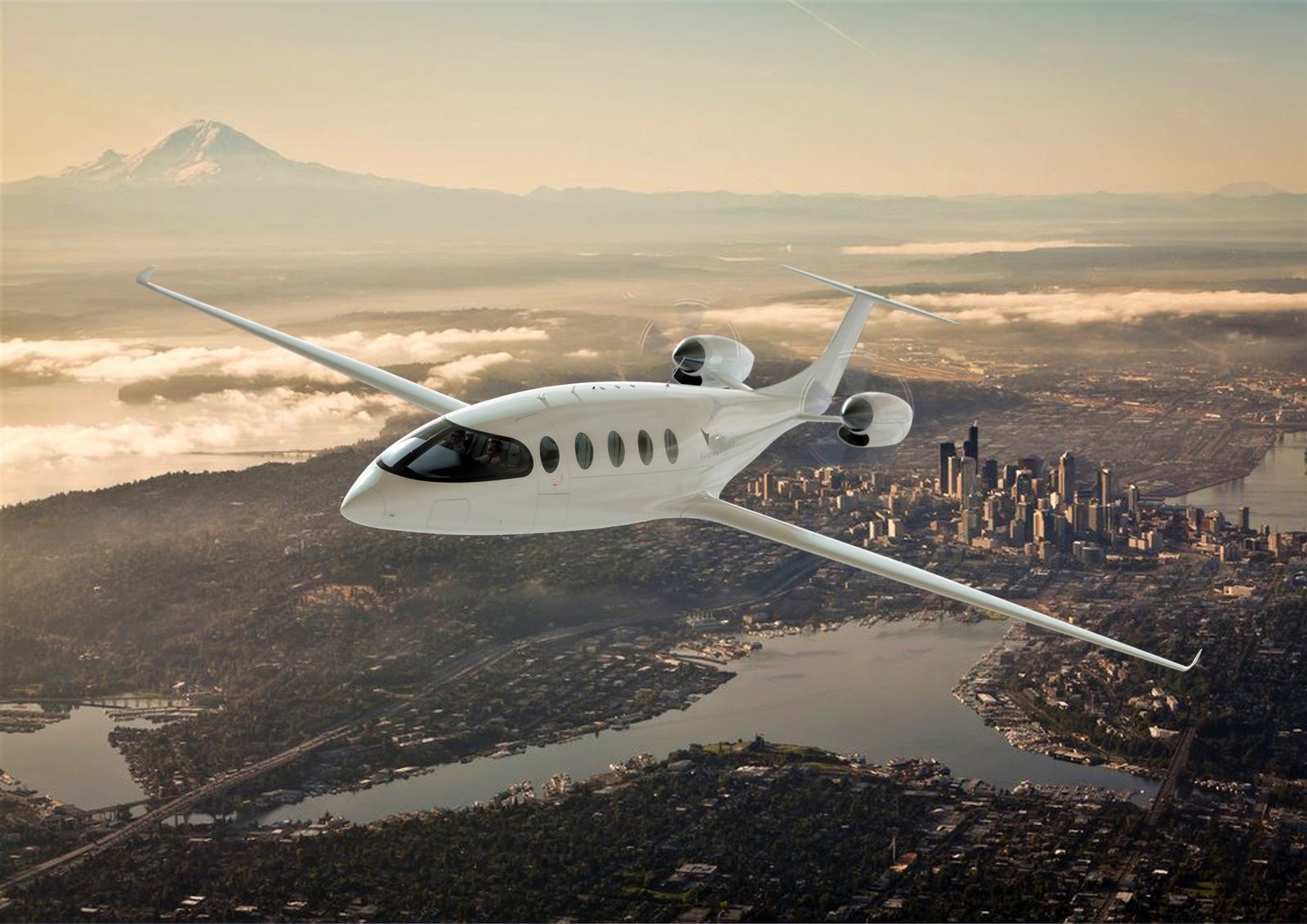 Eviation announced a major redesign of the 9-passenger Alice in July. Crucially, they released some details of its battery: it stores 820 kWh and weighs 3720 kg, implying a specific energy of eb = 220 Wh/kg. That’s for the whole battery pack and system, including temperature management.

For reference, the Tesla Model 3 has the highest specific energy battery pack now in widespread commercial use, at eb = 160 Wh/kg. However, Tesla’s forthcoming 4680 cell, due in 2022–2023, is aiming to achieve 380 Wh/kg at the cell level, which could mean that (allowing for framing, wiring, and cooling) 240 Wh/kg at the pack level is achievable.

On the other hand, the safety and cooling requirements are likely to be more stringent for planes than for cars. A lot of engineering has to happen between now and commercial flight to achieve the required weight and performance, to say nothing of reassuring the regulators about the risks of thermal runaway in the batteries.

A high propulsion efficiency is also crucial for range. Here we take η=0.87, which requires each of the electrical and propeller systems to be well over 90% efficient. This is optimistic, but we can be sure that the engineers are aiming for something like this.

This gives the 9-passenger Alice, with a whopping 58.6% of its mass taken up by batteries, a range of 658 km (409 miles). That’s an upper limit, since we haven’t taken into account any energy used by the other on-board systems, or the fact that climbing uses extra energy that is not all recouped on the descent. It’s less than the claimed range of 820 km (510 miles), but still very impressive.

But not all that range is available for scheduled flights. Most regulators (e.g., in the US) require a 30 minute safety margin for daylight flights – about 165  km. (Night flights need 45 minutes of reserves, and flights under Instrument Flight Rules need to be able to fly to an alternate airport plus an extra 45 minutes.) In addition, the battery capacity will degrade over time and the batteries will likely be replaced every 1500 flights or so, or at 80% state-of-health. With 30 minutes reserve and 80% state-of-health, the available range of the Alice is reduced to 360 km (224 miles).

Eviation does have a bit of weight free. The company could add more batteries while staying under the 8618 kg weight limit for this class of plane. However, diminishing returns set in, because unlike in a car, the extra batteries have to be carried aloft, which costs energy. Adding 50% more batteries would only increase the range by 16%. Heart Aerospace has said that the battery of the 19-passenger ES-19 weighs 3000 kg. This puts the battery at 35% of the maximum takeoff weight of 8618 kg. This is also consistent with an eb = 220 Wh/kg battery and a range chart released by the company. Together, these give a range of 393 km, matching the company’s claim of 400 km. However, the reserve requirement now really eats into the possible routes, leaving only 150 km (93 miles) of range if a 30 minute reserve is needed.

The ES-19 is to be made of aluminum, which is cheaper, simpler, and heavier than composites. Heart Aerospace is aiming for an empty weight of about 3600 kg. The aluminum-framed Beech 1900, a popular 19-seat regional turboprop built from 1982 to 2002, has an empty weight of 4732 kg. A group of aircraft engineers at Linkoping University in Sweden have recently carried out a conceptual study of a 19-passenger electric aircraft very similar to the ES-19. It comes in at an empty weight of 3623 kg, achieved with extensive composites and no cost restrictions. Their more detailed model predicts a range of 284 km (176 miles) when eb = 220 Wh/kg.

The Lilium Jet is something different. By far the highest-profile project of the three, Lilium recently went public, raising $585 million to add to the $375 million already on hand. It has 600 employees. The Lilium Jet uses an array of pivoting ducted fans rather than conventional propellers, allowing a vertical takeoff which quickly pivots to conventional flight. It doesn’t need a runway, but it has a lower weight limit (used for helicopters) of 3175 kg. The data they have released, taking into account that the batteries cannot deliver the power needed for landing when the battery charge is below 10%, give a range of 160 km (99 miles), much lower than their aim of 250 km (155 miles). (This is less than what is given by the battery range equation, because the ducted fans are less efficient than propellers and the hovering phase is extremely energy-intensive, while the fan design is a compromise between the cruise and hover phases.)

Lilium gets a range of 250 km by incorporating a battery with eb = 320 Wh/kg at the cell level and discounting the weight of the packaging and thermal management, remarking that “the structural modules of the battery cells will be part of the empty aircraft structure.” That’s a pretty big task, since they are already aiming for an empty weight less than half that of the Hondajet. Not quite. Batteries now starting production do deliver a useable range, if not quite what the companies are hoping. They will be aiming to get a foot in the door and to upgrade to better batteries as they become available. There are engineering hurdles to overcome, including minimizing weight and ensuring the reliability of the battery cooling system. There are political hurdles to overcome in certification. Existing modern aircraft are extremely safe, with only one fatal crash per ten million flights. Any battery issues during test flights will make regulators extremely wary. In addition, developers will also be asking for flexibility on fuel reserve requirements.

Or is it greenwash?

The media is certainly greenwashing like crazy, talking about “Decarbonizing air travel.” Electric aircraft will not be contributing meaningfully to decarbonizing air travel for decades, if ever — decades in which aviation emissions have to reduce steadily to achieve climate targets. Flights of up to 200 km contribute less than 1% of aviation emissions, and flights of up to 500 km contribute 5%.

The companies themselves have slightly different goals. They are hoping to revive short-range commercial aviation, which has been in decline due to its unprofitability and limited time savings. The idea is to offer a cheaper, more comfortable, and more convenient service than existing regional jets. Cheaper because electric, more comfortable because quieter and new, more convenient because they will use more and smaller airports. If this comes about, and especially if the routes lead to major airports connecting to long-range flights, electric aircraft would lead to increased emissions overall. If successful, they would also undermine lower-emission ground transport, such as trains.

Put it all together and it spells … New Zealand?

With all this in mind, it makes sense that New Zealand’s Sounds Air has been chosen as the Australasian launch customer for the ES-19. Sounds Air currently has six 9-seat and four 12-seat aircraft, flying to mostly smaller destinations such as Blenheim (population 28,000). A key launch route would be Blenheim–Wellington, just 75 km (47 miles) across Cook Strait, a famously rough stretch of water that channels the Roaring Forties. The flight would avoid a 3 hour 40 minute ferry ride. Such a route — head winds permitting — is ideal, and could lead to services at many similar island hops around the world.

Sounds Air might also find the regulators easier to deal with. New Zealand has been keen to welcome urban air mobility companies, who applaud its “flexibility” and have said they can do things in New Zealand they wouldn’t be able to do in the US.

Electric aircraft are at an exciting stage and may well find a niche. But they also risk turning into one more means of hypermobility for the rich, at a time when all forms of transport need to reduce in emissions, energy, and resources.

Paul Callister is an economist at Victoria University of Wellington, New Zealand. Robert McLachlan is an applied mathematician at Massey University, New Zealand. They write on climate issues at planetaryecology.org.

Don't want to miss a cleantech story? Sign up for daily news updates from CleanTechnica on email. Or follow us on Google News! Have a tip for CleanTechnica, want to advertise, or want to suggest a guest for our CleanTech Talk podcast? Contact us here.
In this article:Airplanes (Electric), electric aviation, Eviation, Heart Aerospace, Heart Aerospace ES-19, Lilium, Lilium Jet, New Zealand, Sounds Air, Victoria University of Wellington