My Democratic friends were quick to point out that she’s fanning the flames of political violence (a valid complaint), and others were quick to get frightened by her choice of rifle (an overinflated one, but oddly useful for fooling people, as I’ll get to later).

My friends of any political persuasion who happen to be into guns were quick to point out the myriad issues that strain one’s ability to suspend disbelief. The sci-fi “target aquired” screen with the spinning video game reticle, the odd and possibly backwards scope mounting hardware, the lack of safety equipment beyond the “safety squint,” and other things make it clear to anyone with any experience that the video is largely fake, and Greene is a “n00b” at best when it comes to firearms.

The gun owners who aren’t my friends did the same thing they always do when these things come up. I don’t think I need to describe that in any depth (yet). We can sum it up in two words: “muh freedumbs.”

Marge Greene says in 2022 she is going to “blow away the Democrats’ socialist agenda,” then blows up a car with “socialism” on it with a 50-caliber rifle she is auctioning off for contributions. pic.twitter.com/b10wGwVVW2

I have a more important issue to raise that I think we all need to think about: the false anti-environmental choice it tricks viewers into accepting. Unlike the corny video and its obvious flaws, this aspect of the video is actually fairly smart and low-key. The idea is to get viewers (Republicans and Democrats alike) to think past the sale by using our cultural programming against us.

Thinking Past The Sale

This tactic is nothing new among people like Donald Trump (read: demagogues and other con artists). Instead of getting their target(s) for persuasion to think rationally about whether to buy or not buy, the idea is to move them to debate about a post-sale question. Scott Adams, the creator of the Dilbert comic strip, has pointed this out in the past. In his blog post, the example he gives is of a car salesmen asking you whether you want a red Honda Civic or a blue one. Instead of deciding whether you want even want a Civic at all (a Model 3 would be the better financial choice), the salesman moves the potential buyer past thinking about whether to buy a Civic and on to thinking about which one they want.

Of course, not all people using the “think past the sale” persuasion tactic are selling something you can buy with money. The goal is just as often to get you to “buy it” in more of a Ferris Bueller sense:

Now that we have this tactic in mind, let’s look at how it was used against us in this video.

Using Our Biases Against Us

By choosing a polarizing topic (guns in this case, and in many other stunts Greene pulls), Greene’s PR people (who already hate me for things I wrote on another blog about one of her stunts) know that people will quickly move to their default position and argue for it. Why? Because we’ve been conditioned for decades to react this way, just like military personnel are trained to do crawls and rushes when bullets come their way.

Just like soldiers, we seek out a safe place from which to fire at the enemy we think we’re facing.

Republicans that are fiercely loyal to their party quickly move to the safe spot of “muh freedumbs,” and start criticizing anyone who doesn’t like Marjorie Greene’s video, saying that they’re against gun rights, and maybe economic rights if they’re a midwit. Another common place to find cover is in the Cold War. By defining socialism very broadly and conflating socialism with communism, it’s easy to get off a cheap shot against anything done by government, ever, as if it was done by the mass-murdering Joseph Stalin himself.

Meanwhile, Democratic Party loyalists do the same thing, but pick different places to find cover and fire on the Republicans. “Think of the children” (or, “you don’t care about children”), “Nobody needs a fifty cal,” and, most recently (since 6 January), “Rebel SCUM!” are all common places to take cover that allow you to score hits on Republicans.

We’ve been having these skirmishes for decades whenever the topic of guns comes up, so we know the drill, and like the literally programmed clone troopers who gunned down the Jedi in Star Wars, we are also good soldiers who follow orders.

The problem is, we’re so busy following our pre-programmed responses to seeing a polarizing political topic, that we don’t stop to think about the basic premise of Greene’s video.

The Sales Many Of Us Thought Past

In order to get to the point where we can argue over the morality of the gun part of Greene’s message, we have to accept several premises.

First, we must accept that the Toyota Prius (and by extension other low or zero-emission vehicles) represents environmentalism, the left, socialism, etc.. For the far right-wing viewers, this is a fait accompli. In their minds, Prius’ (or, perhaps more correctly, Prii) were once something only a radical environmentalist would purchase. When they were new, the cost difference between a Prius and a comparable non-hybrid car exceeded the potential gas savings. Thus, one would have to be committed to the environment more than their money to buy one.

I’ve also seen people on the left think similarly. When someone who is right-leaning is made to feel unwelcome in a Tesla or EV social group (online or off), they show that they believe clean vehicles aren’t for people who don’t share their beliefs. It’s the opposite side of the coin, and plays right into the hands of Big Oil and others opposed to the future growth of EVs.

Greene’s staff probably would have loved to use a Tesla or other EV in place of the Prius, but a busted 2G Prius stuffed with Tannerite is a lot cheaper and combusts a lot more reliably (another little hidden message — the false sense of EV fire danger). Either way, the basic message (clean car ownership equals being left-wing) was achieved.

The reality that’s easy to forget is that many people now choose clean vehicles for a broad variety of decidedly non-political and even non-environmental reasons. They’re cheaper to operate, are often more fun to drive, and are often a lot less of a pain in the ass compared to gas-powered vehicles. The fact that they’re better for the environment doesn’t even have to come up.

Once we’ve accepted this premise (clean car equals left-wing), it’s a lot easier to accept the premise that policies meant to promote electric vehicles are also left-wing, and thus are something no right-leaning person should ever support. This isn’t going to affect left-leaning viewers much, but the idea is to push right-leaning viewers into thinking that clean cars (and policies that promote them) are a threat to one’s freedom that must be dealt with (perhaps with violence if necessary).

The “good soldiers” who see this message over and over (both from Greene and others) then go and key Teslas in parking lots, shoot at them on the highway, and do other stupid things out of fear. More importantly, though, they vote for politicians who oppose environmental policies and donate to their campaigns.

The Antidote To Her Message: Hope

In closing, I’ll throw out one more Star Wars reference.

Instead of letting people like her push us to fear, we need to embrace hope. Hope for a better future, regardless of what kind of future we’re after, is key. It doesn’t matter whether we hope for better finances, a better environment, or just for a faster car that’s more fun. The key thing is that we unite behind hope instead of being divided by our fears.

Appreciate CleanTechnica’s originality and cleantech news coverage? Consider becoming a CleanTechnica Member, Supporter, Technician, or Ambassador — or a patron on Patreon. Don't want to miss a cleantech story? Sign up for daily news updates from CleanTechnica on email. Or follow us on Google News! Have a tip for CleanTechnica, want to advertise, or want to suggest a guest for our CleanTech Talk podcast? Contact us here.
In this article:guns When I’m not writing at CleanTechnica, I write part-time for The Truth About Guns, a popular gun blog. My experience as a firearms instructor... A report this spring by the Johns Hopkins School of Public Health University said the nation has lost 1,357,000 victims to firearms in the... Some stereotypes are useful. Others are not. All of them need to be challenged from time to time. Today, I'm challenging the myth that... 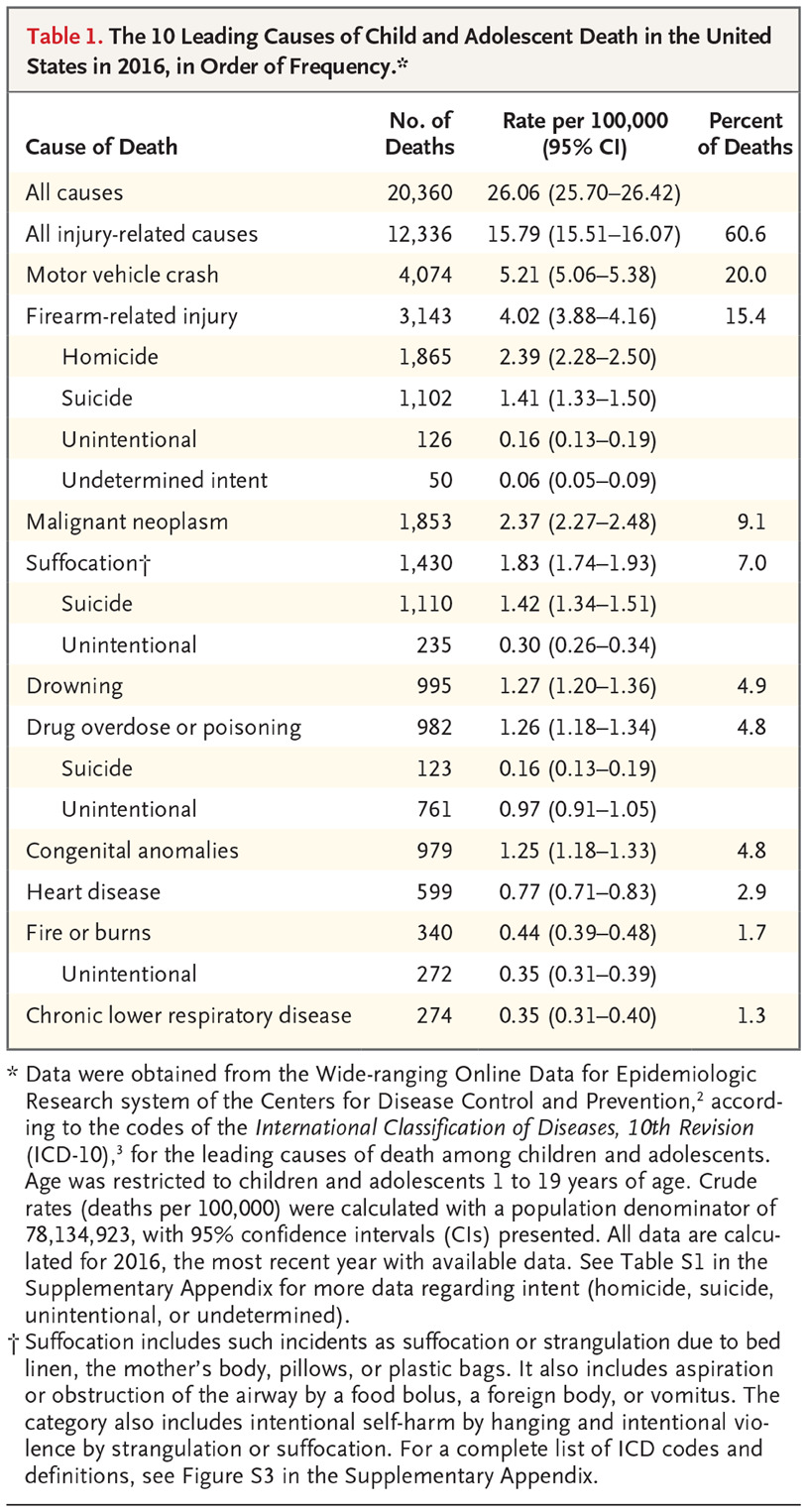 A valuable report published in the New England Journal of Medicine lists the 10 leading causes of death among American youth. It examines statistics...