In a recent run at Laguna Seca, The Kilowatts spotted a neat feature on a Tesla Model S Plaid: a new active spoiler that’s enormous (compared to factory active spoilers we’ve seen before).

One big thing we can learn from this is that Tesla is working on not only having its cake, but eating it, too. Tesla has reached the edge of what track performance they can get out of the Model S without sacrificing range, and now they’re going to keep going.

The Challenge Here: Downforce vs. Drag

I could go into depth about all of the math and science involved, but a recent “Engineering Explained” video goes through most of it. In his example, he’s looking at different variants of the same Porsche model, but the aerodynamic engineering principles are basically the same. Have a watch:

The big problem in engineering performance EVs is that you get to the point where you need more downforce, or aerodynamic pressure that pushes the car into the ground, to help the tires get a better bite on the pavement. At high speeds, this is essential, because the car will eventually start to come off the ground and lose grip entirely. Big spoilers and other big aerodynamic features can accomplish this, but they come at a cost.

When you optimize for downforce, you end up increasing overall drag. For a race car, that’s usually okay, because you’re better off to use more fuel and even lose some top speed ability than you are to fly off the track. A tradeoff that avoids catastrophe is a no-brainer.

For a traditional Porsche, this isn’t as big of a deal, because a track-oriented car that people drive on the street still runs on gasoline. If it goes 20–50 less miles on a tank, people can just stop for 5 minutes and pump in more gas. So, they produce more mild versions that are set up for better efficiency, and other versions of the same vehicle that are designed to add more downforce. Both versions will sell well, and nobody is going to get mad about the downside of the performance version.

Where this becomes really problematic is when you’re building an electric vehicle for the street that needs to be more wild on the track. If you bolt on a big spoiler, a big splitter, and all of the other big things you need to get maximum track performance, the vehicle’s range will suffer immensely. Losing 50 miles of range means you’re spending a lot more time at Supercharger stations on highway trips, so the car loses a lot of the practical advantages (among other issues, like losing range on the track, increased battery heating, etc.).

For most people, that’s not a tradeoff they’re willing to make, so Tesla has been optimizing for range.

As you can see, the Model 3 (like most other Tesla vehicles) is smooth, enclosed, and set up for maximum range short of doing something more wild like the Aptera. For nearly all drivers, this is the best thing to do.

Things Tesla Is Already Doing For the Model S

For the Model S, they’ve made a number of other design choices to minimize drag and maximize range, while getting some high speed downforce, too. 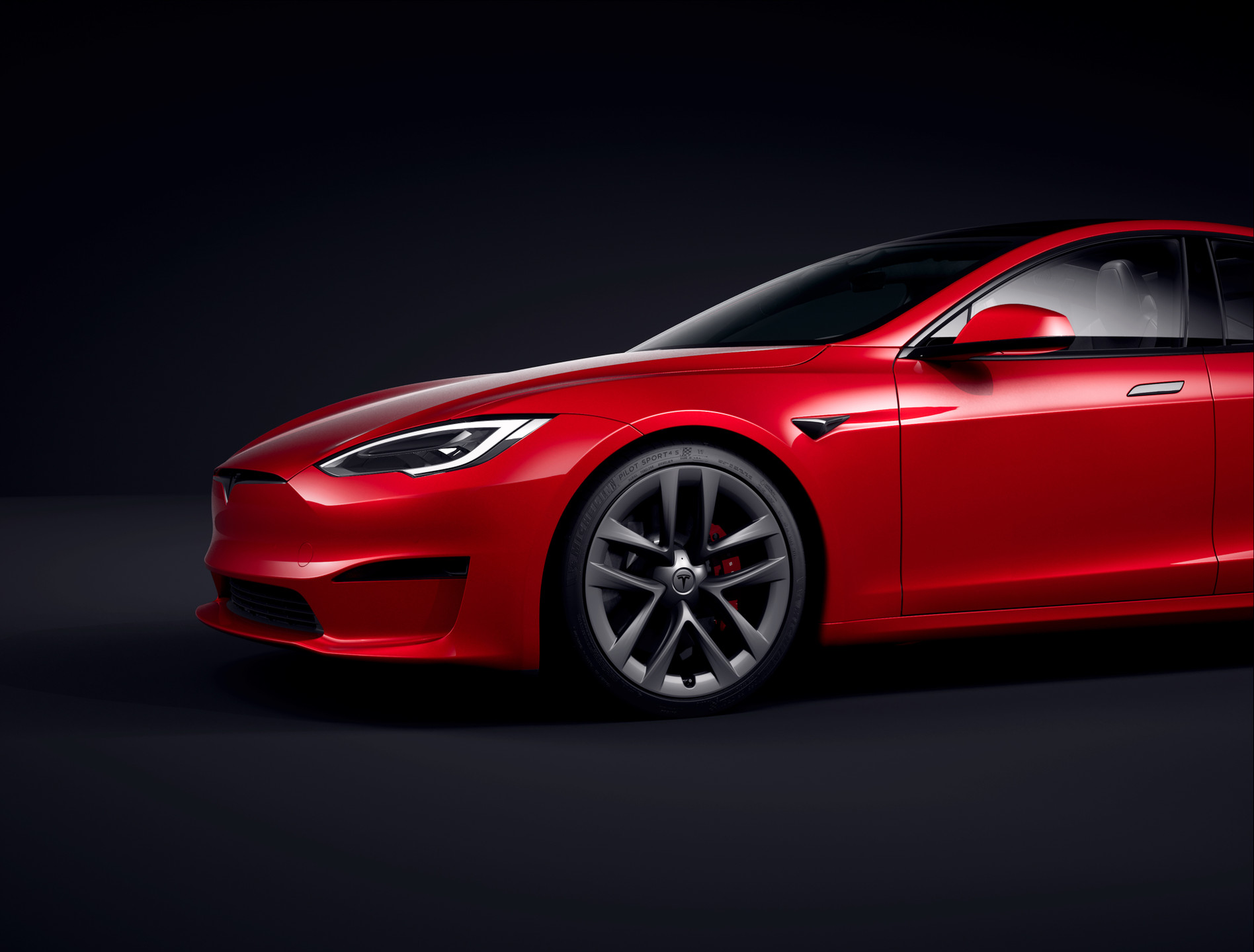 As you can see, the front “chin” of the car has a small splitter/spoiler. When a modest splitter is put on a car, it can help front downforce a bit while actually improving drag. It could probably be a bit bigger (as Unplugged Performance’s bigger splitter for the Model 3 nets a 6% improvement), but making it any bigger would be too much for some people, and possibly end up getting scratched up on the fronts of parking spaces. For example, the Dodge Challenger’s bigger splitter has the odd trend of people leaving the splitter guards (originally intended for transport) on the car all the time. The back of the S also has a mild diffuser. This not only helps with high speed stability, but doesn’t carry much of a drag penalty. In some cases, it can even help reduce drag. Once again, Tesla struck a balance here in favor of range.

If you look just ahead of each wheel well, you’ll notice what looks like a small backwards mud flap. When the air is coming at the front of the tires, these help direct the air down and around the tire, reducing drag. This may create a small amount of lift, but the increased range is probably worth that tiny amount of lift (if any).

Obviously, Tesla puts a lot of thought into vehicle aerodynamics, and the designers and engineers are doing everything they can do to get the most performance without hurting range and efficiency. They’ve pushed that balance to the limit of what a passive and fixed body shape can accomplish, and now they’re taking the next step out beyond those limits.

When you take a car like the one Tesla had on the track for a drive on the highway, you’ll probably want maximum range. In that case, the spoiler will retract and put itself into the lowest position, and your Model S will look like any other Model S. Airflow will be optimized for range and efficiency, and you won’t get any kind of a noticeable drag penalty for having that spoiler. Life is good.

Stomp the skinny pedal and start getting into some serious speed, and the spoiler can pop itself up to start adding the needed downforce. Obviously, range will suffer, but if you cared about range, you wouldn’t be stomping that skinny pedal and running into triple-digit speeds, right?

On the track, similar benefits can be had. During high-speed turns, the wing can pop up to add needed downforce. Same for high-speed runs in the straights if it’s needed for vehicle stability. In situations where the extra downforce is not needed, the wing can tuck itself back into lines of the body of the car and allow for minimum drag.

Knowing Tesla’s past on things like this, it probably has some neural net that can help decide whether to deploy the wing and at what angle to set it for maximum benefit.

Speaking of benefits, this ability to choose whether the car has a wing or not is helpful for other things. By putting it away or into a lower drag position when it’s not needed, Tesla can get the good from it without contributing to less track range and more motor/battery heating.

Tesla Model S Plaid drivers really can have their cake and eat it, too!