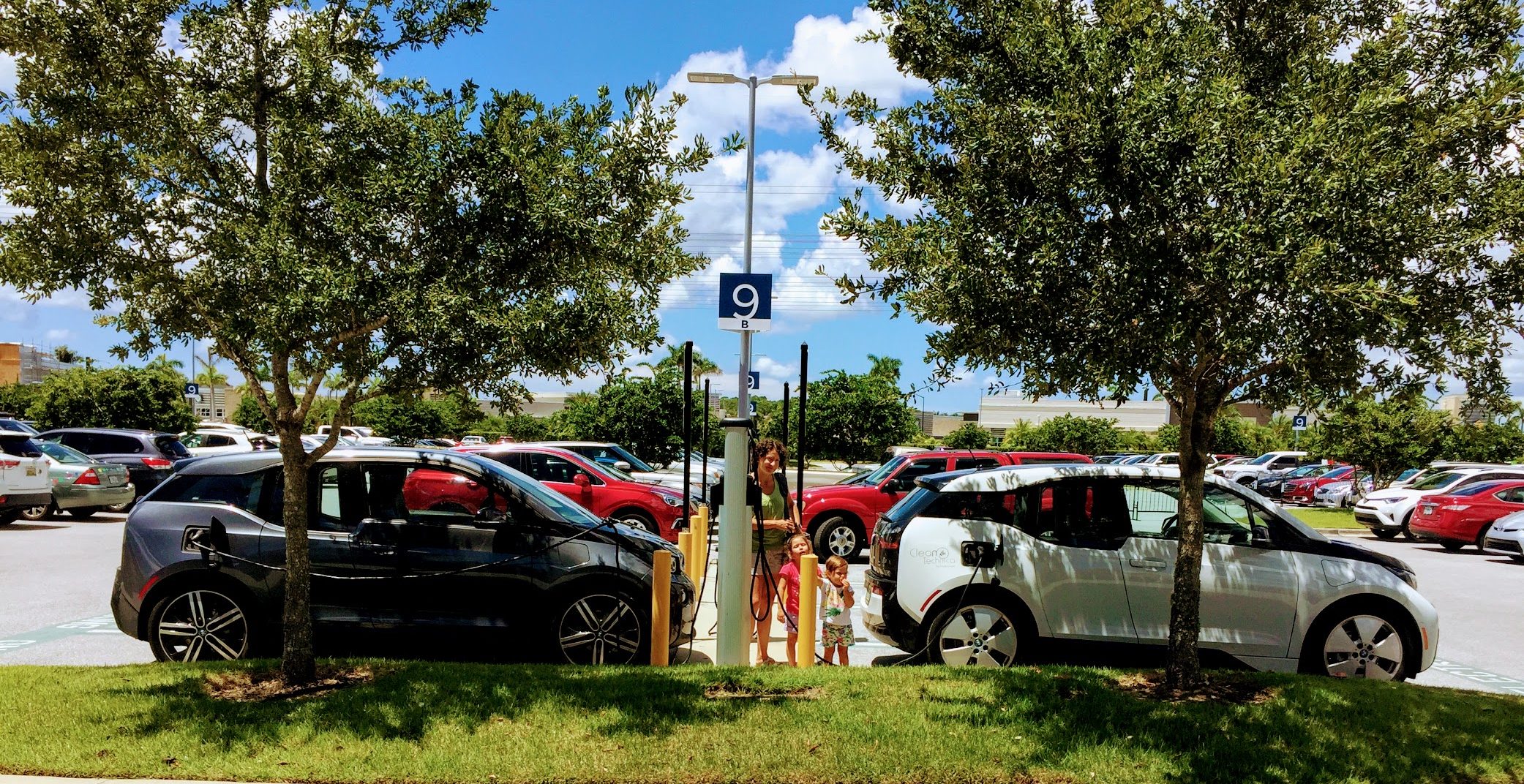 Courtesy of Union Of Concerned Scientists.
By Elliott Negin

There has been a spike in good news recently when it comes to the future of electric vehicles (EVs). That’s encouraging, given the transportation sector is now the largest source of US carbon emissions and vehicles are the main culprits.

Late last month, President Biden signed an executive order directing federal officials to come up with a plan to convert all federal, state, local and tribal fleets to “clean and zero-emission vehicles.” That amounts to roughly 645,000 vehicles, which currently travel some 4.5 billion miles every year, consume nearly 400 million gallons of gasoline and emit more than 7 billion pounds of carbon pollution.

This is a big deal. If every vehicle in the federal fleet were electric, the number of all-electric EVs in the United States would jump by more than 50 percent. Biden’s announcement alone, by guaranteeing greater demand, should spark automakers to amp up their investments in EV technology.

As if on cue, just a day after Biden signed the executive order, General Motors (GM) announced it hopes to stop selling gas- and diesel-powered passenger cars and light sports utility vehicles (SUVs) by 2035. That target date is likely no accident. Last fall, China announced that 50 percent of the new cars sold in the country by 2035 will have to be electric, plug-in hybrid, or fuel cell vehicles, while California Gov. Gavin Newsom signed an executive order banning the sale of gasoline-powered passenger cars and pickup trucks in his state by then.

Of course, transitioning from gasoline- and diesel-powered vehicles to EVs will not happen overnight. Cars remain on the road for an average of 12 years and trucks average 15, so it will take some time to turn over the entire US fleet of 280 million cars, light trucks and heavy duty rigs. In the meantime, a UCS member from Terre Haute, Indiana, who used to work in the auto industry, wanted to know if it would make the most sense to promote gasoline-powered hybrids and stronger fuel efficiency standards, not pure EVs, for the time being.

“There is certainly a lot of hype about electric vehicles,” Terry S. wrote. “If electricity production were 100 percent renewable, then electric vehicles would be a big step in reducing carbon dioxide emissions. But transitioning to electric vehicles is likely to take decades. I applaud UCS for working to accelerate that transition. However, it seems a larger emphasis should be on pushing the adoption of hybrids, such as the Prius, and higher mileage standards over the next decade.”

Does the US electricity grid have to be completely carbon pollution-free before EVs can make a significant difference? And would it make more sense to recommend that car buyers purchase hybrids instead of EVs for the next 10 years or so? These are good questions.

EN: Let’s start with Terry S.’s comments. Based on your research, what would be the best way to go over the next decade? Do EVs make sense when some parts of the country still get their electricity from coal-fired power plants? Would it make more sense to buy a hybrid instead of an EV?

DR: To avoid the worst impacts of climate change, we’ll need stronger gasoline fuel efficiency and emissions standards and a quick transition from gasoline-powered vehicles to EVs. It will take both at the same time. But for nearly everyone in the United States, the best option today for reducing carbon emissions is an EV.

Last year, we updated our analysis of EVs by comparing lifecycle emissions from EVs and gasoline-powered cars. For gasoline cars, we calculated the total emissions from extracting crude oil, shipping it to a refinery, manufacturing gasoline, and then trucking it to filling stations, in addition to their tailpipe emissions. For EVs, our calculation included electric power plant emissions as well as the emissions from producing coal, natural gas and the other fuels that power plants use.

We found that the average EV is responsible for lower carbon emissions than a 50 miles-per-gallon gasoline car for 94 percent of the US population. But that’s for the average EV, because the most efficient EVs currently available are better than any gasoline-powered car virtually anywhere across the country. And in regions with cleaner electricity grids, EVs are also much cleaner than gasoline cars. For example, the carbon emissions associated with an average EV driven in California are equivalent to the emissions from a hypothetical 122-mpg gasoline car, while an EV in upstate New York is even better. It would have emissions equivalent to a 231-mpg gasoline car.

It’s also important to consider that a new EV purchased today will be powered by an electricity grid that is getting increasingly cleaner as the nation moves away from coal and adds renewable sources like solar and wind power. The amount of electricity from coal-fired plants dropped from 45 percent of all US output to 28 percent between 2009 and 2018, which helped make driving on electricity cleaner. Unlike gasoline cars, EVs already on the road are going to get “cleaner” over time.

EN: Let’s turn to some of the recent developments. What’s the significance of President Biden’s recent executive order? What challenges will be have to be overcome to make his administration’s goal a reality?

DR: First off, it’s an important signal from the new administration that it recognizes the need to move rapidly to electric vehicles. The federal government’s purchasing power will help push automakers to offer more EV models at higher production volumes, given the certainty of demand. It won’t be easy to make Biden’s executive order a reality, though. While there are a lot more EV models available now, there are some types of vehicles, like pickups and full-size vans, where electric options aren’t yet available. The government also will have to install infrastructure at federal facilities across the country to recharge these EVs.

EN: GM won plaudits for its recent announcement, but unlike BMW, Ford, Honda and Volkswagen, the company has not agreed to comply with California’s emissions standards, which are more stringent than the Trump administration’s watered-down targets. How do you see GM’s commitment, and how does the company stack up against other automakers?

DR: I’m all for auto companies setting targets to electrify their vehicle offerings. However, GM only said that it aspires to getting rid of tailpipe pollution. At the same time, it still supports the last administration’s weakened emissions standards and has decided not to join the four automakers that have agreed to comply with California’s emissions standards. And while GM has announced plans to release new electric models, less than 1 percent of its US sales last year were EVs. If the company were serious about committing to an electric future, it would support standards that ensure the country will have 100-percent zero-emission vehicles on the road by 2035.

EN: What needs to happen to enable the switch from gasoline cars to EVs?

DR: To accelerate the transition from gasoline to electricity, several barriers have to be overcome.

First, automakers have to manufacture more EV models, including sedans, full-size SUVs, pickups and minivans. Regulation is powerful tool to make that happen. There are more options for EV buyers in Europe right now because their emissions standards are ahead of the United States.

Second, EV owners need a lot more recharging infrastructure to support long-distance travel and options if they can’t charge at home because, for example, they live in an apartment building and have to park on the street. Private charging companies will play a role, but electric utility and government investments can help ensure that infrastructure is available so more people can buy an EV and not have to worry about where they can charge it.

Finally, automakers have to provide car buyers with the information and resources they need to have the confidence to choose an EV over a gasoline car. Virtually every driver knows how to refuel a gasoline car. Charging an EV isn’t hard, but EV owners will understandably have questions about where they can plug in.

EVs are cheaper to drive and maintain than gasoline cars, but they still have a higher upfront cost. Battery — and therefore EV — costs are coming down quickly as production volume increases, but federal and state incentives will be critical during this transition period to address both the upfront cost and consumer uncertainty over a new technology. It will also be important to make it easier for low- and moderate-income households to go electric by, for example, providing incentives for used EV purchases and ensuring that renters in apartment buildings have access to nearby charging stations.

EN: What else should car buyers be thinking about when considering an EV?

DR: We want to get to the point where everyone in the United States can choose an EV and meet their mobility needs. We’re not there yet. We need more EV models and charging availability for everyone. Even so, a lot of people could make their next car purchase or lease an EV, either a fully electric vehicle or a plug-in hybrid, especially given the fact there are more affordable long-range models available this year. Switching to an EV is a step people can take right now to make a significant reduction in their carbon emissions. Plus, owning an EV has real advantages: They are cheaper to refuel, have lower maintenance costs, run quietly, and often perform better than a gasoline car. The bottom line: Buying an EV will save car owners money, reduce toxic air pollution, and cut carbon emissions at the same time. That sounds like a good deal to me!

David Reichmuth is a senior engineer in our Clean Transportation program. His work focuses on analyzing new vehicle technologies and advocating for policies that support the increased electrification of transportation.