Generac introduced the first version of its home energy storage solution at Solar Power International in Salt Lake City last year and is already back with a slew of improvements. The improvements bring meaningful new functionality to the system for homeowners including:

Generac’s business for the last 6 decades has been adding gas-fired generators to homes and they are clearly leveraging that experience to improve its new battery systems. CleanTechnica sat down with Generac’s CMO Russ Minick for a virtual chat about the improvements to Generac’s lineup to get the lowdown on what they mean for Generac in 2020 and beyond.

Many of the first generation battery systems like the system developed by Generac acquisition Pika Energy were focused on rate arbitrage, but early customers wanted more. “The homeowner and consumer had a different idea,”  Russ told us. “The power started going off more, PG&E started shutting off the power, hurricanes were blowing up all over the place, ice storms. This has all lead to a climate change-induced power outage environment that is relatively new for a lot of the country.” 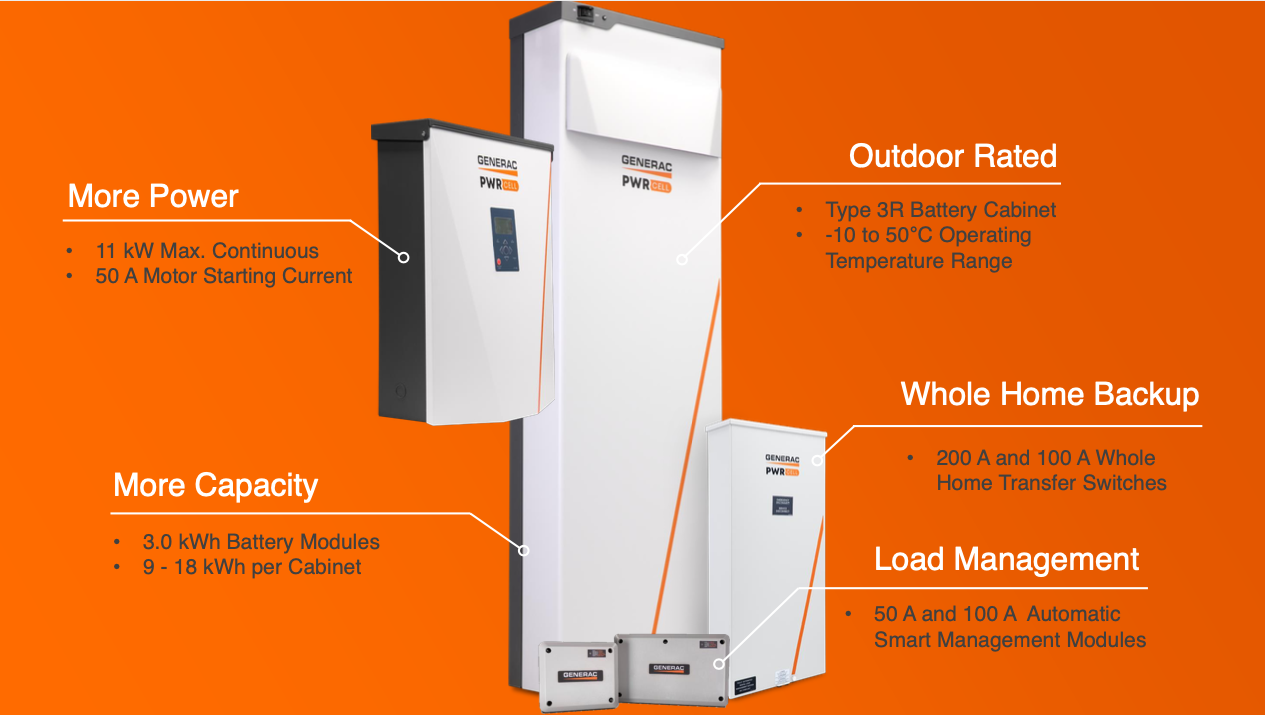 The improvements Generac made in the last year make its home energy storage solution more capable in just about every way. More storage capacity, more power output, more functionality, more loads can be backed up, and it can be installed in more places. That translates to more value for the customer from day one.

The new Generac Automatic Transfer Switch brings meaningful functionality to owners as it enables whole home backup for 100 amp or 200 amp load centers (electrical panel) with up to 50 amp peak loads. “We just launched a whole home transfer switch that has load control or load logic in it so you can prioritize loads and it can drop the lowest priority loads first and bring them back when it can,” Russ said.

The ATS is the core of any home energy storage solution as it automatically isolates the system from the grid in the event of a grid failure. Doing this keeps the grid safe by preventing power from the battery to feed back into the grid, creating an unsafe condition. In most home battery installations, the homeowner has to decide at the time of installation which circuits in the home will be backed up. Called essential loads, these circuits must then be run to a dedicated sub panel. This panel is then connected to the battery, creating a hardwired selection of what can be powered in a grid failure event and what cannot be backed up.

Air conditioning units for the home can be directly wired into the Generac system to let the system intelligently prioritize what are typically some of the biggest loads in the home. For smaller loads that the homeowner might want to explicitly prioritize or de-prioritize in the event of a power outage, Generac built a new bolt on offering that’s about the size of a deck of cards. Generac’s compact new Smart Management Modules (SMM) are installed between each major appliance and the outlet to give the homeowner the ability to lock out the device in the event of a power outage. Connecting these up to the Generac system lets the system turn the device on or off in the event of a power outage. “These are little devices you can put on any load, not just air conditioners,” Russ said. “They can also be prioritized and can drop loads and bring them back.”

For example, a homeowner could decide that the circulation pump for the swimming pool should not be given power during a grid outage. Dropping an SMM on the line effectively adds intelligence and connectivity to the device by simply plugging one of Generac’s devices in to a home that’s covered by one of Generac’s home energy storage systems or traditional gas-fired home backup generators.

On the other hand, SMMs can be used to set a high priority for a specific device that should always stay on. A refrigerator for the home, for example, could be set to never be turned off by dropping an SMM onto the refrigerator circuit between the appliance and the power supply.

This year, Generac also upgraded the storage capacity of each of the battery modules in the PWRcell energy storage unit from 2.85 kWh up to 3.0 kWh. “We moved those up to 3 kWh per module and we implemented a cooling system on them which extended our operating temperatures on them,” Russ said. The new modules increase the max storage possible in Generac’s configurable energy storage solution from 17.1 kWh to 18.0 kWh. The new battery modules don’t just have better or more battery cells inside, but rather, they represent a complete redesign of the module. The new modules feature an integrated heat sink and active thermal management system that increases the operating range of the system to a massive -10C to 50C. Actively managing the temperature of the batteries also extends the life of the cells and ensures robust performance in a wider range of conditions.

The new system isn’t shy about cranking out the power, either. Generac increased the continuous power output rating of the system to an impressive 9 kW and 50 amps of power. Compared to the 5kW output of Tesla’s Powerwalls, that’s a massive advantage.

The active thermal management of the battery modules and a new enclosure also let homeowners opt to install the PWRcell system outdoors. For many homeowners, that is preferred to giving up precious space in often cramped garages.

When we first talked with Generac at SPI in 2019, it was clear the company was moving into the home energy storage space in earnest. They talked a big game about the current lineup with a massive amount of improvements planned. Less than a year later, when we would normally be getting ready for another chat at SPI, Generac is back with a massive set of improvements on the first iteration of its product lineup.

It’s exciting to see a company built on selling and installing home generators move into the home battery business and that’s exactly what Generac has done. They are pouring a massive amount of energy into leveraging the existing network of installers and product builders to make the business successful and have already taken a leadership position in many of the key metrics. We’ll definitely be keeping an eye on what comes from Generac in the coming months and years. Why Owning Your Own Power Plant Might Not Be Crazy →