The Arcimoto Deliverator Could Be The Ultimate Last Mile Delivery Vehicle

Arcimoto unveiled the prototype of a last mile delivery version of its Fun Utility Vehicle last year and is back with a sleeker, more refined version of the Deliverator. CleanTechnica spoke with Arcimoto CEO Mark Frohnmayer to get the inside scoop on the new build and on Arcimoto as a whole.

Right up front, it’s clear the look of the Deliverator is more refined. Gone is the bolt-on aluminum delivery box. In its place is a fully integrated storage compartment that fits the overall look of the vehicle much better. It’s easy to imagine the new version branded up with a vinyl wrap from a local pizza joint, Amazon Prime, or UPS for delivery, or even from a local grocery chain. 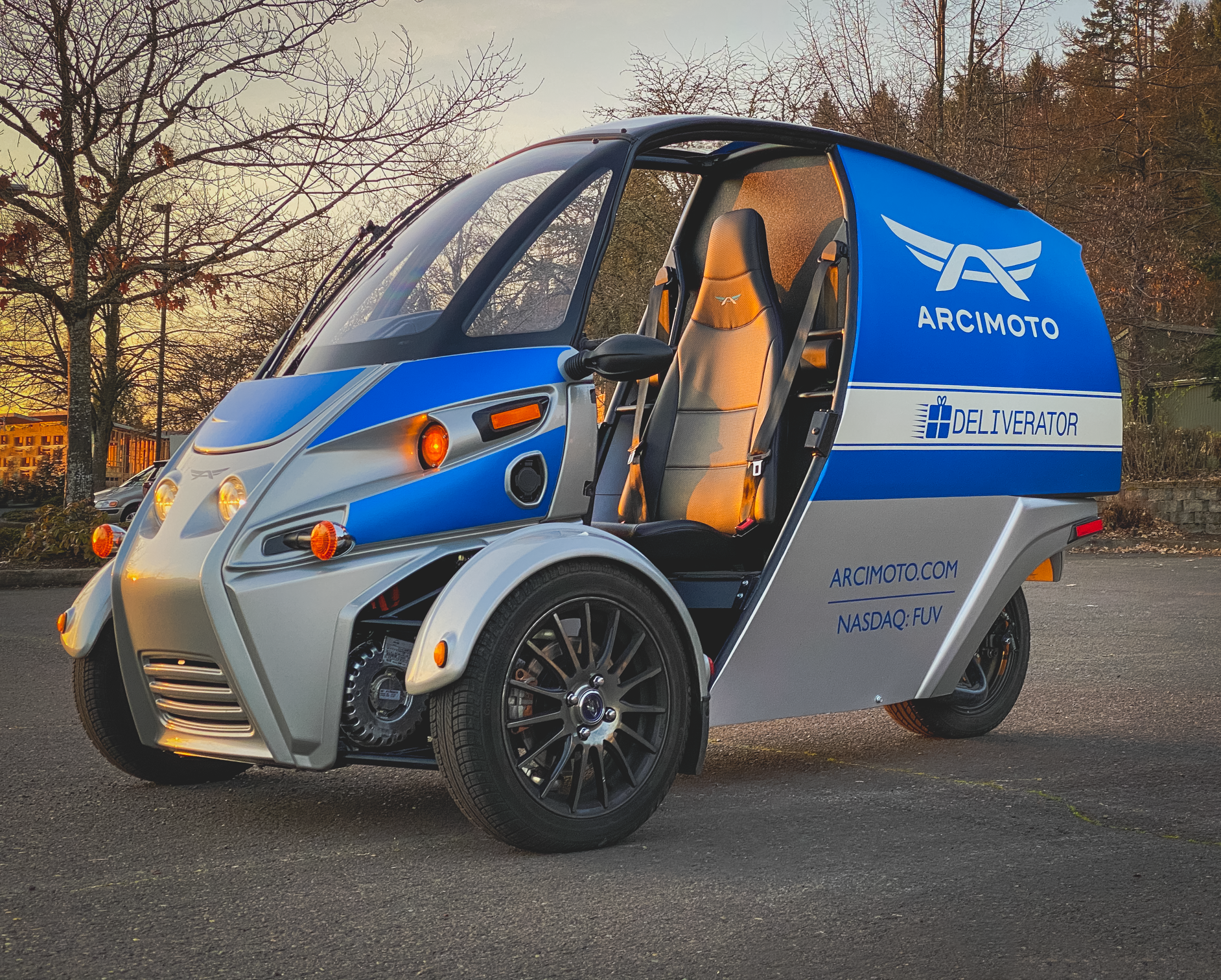 The new and improved Deliverator has been tested internally by the Arcimoto team and in the next few weeks, will be heading out into the world for the first time. “We are now getting it out in the hands of real delivery applications, initially starting in food delivery in the next 2-3 weeks,” Mark said. Early feedback on the new design from potential customers has been extremely positive, with a focus on the low cost of operation compared to a combustion vehicle, the right-sized form factor for quick deliveries, and an attraction to the compact footprint.

The small three-wheeled vehicle is able to weave in and out of traffic far better than a traditional delivery vehicle and the benefits don’t stop there. “The real advantages of the arcimoto platform is that it can get across town faster and that you can park it anywhere,” Mark said. For quick pit stops to drop off packages, the Deliverator is able to park in the spaces in between parked cars. It’s not large enough for another car to park, but the Deliverator is able to make use of the otherwise unusable gaps. That’s far better than leaving a massively oversized box truck double-parked in the street or bike lane, if you ask me. The current phase will see a handful of Deliverators being piloted with real customers in real delivery applications to see how the production-ready vehicle holds up to the rigors of daily abuse. “We’re mostly getting vehicles out to key fleets and won’t be moving into volume production until later this year.”

The Deliverator is Arcimoto’s first offering geared towards fleet customers. “Initially, we are looking at fleets that own their own vehicles: restaurant chains, grocery stores, parcel delivery,” Mark told me. Arcimoto also sees an opportunity for vehicle pool management services like Fair to purchase the vehicles for lease to drivers for food delivery services like Uber Eats. E-commerce has transformed last mile parcel delivery and just-in-time last mile delivery for items like food and groceries into a massive industry, but it has also created a massive congestion and urban air quality problem at the same time.

The Deliverator is shaping up to be one of the keys to decoupling the convenience of last mile delivery from worse traffic, parking woes, and heavy diesel emissions it has historically been known for. On top of that, I can’t imagine anyone who would rather be cooped up in an oversized box truck than to be gliding along city streets on a fully electric three-wheeler like the Deliverator.

Arcimoto continues to ramp up production of its vehicles based on the original Fun Utility Vehicle. Over the years it has been building vehicles, prices of lithium-ion batteries have continued to come down year over year. “We’re getting substantially better pricing today than we were a year ago and if we look out a year or two, it’s getting better still,” Mark said. Arcimoto will continue to ride the roller coaster of battery prices as battery cell production volumes around the world continue to ramp up, driving costs down year over year. Today, that puts the base price of the FUV at $19,900 with the more capable Deliverator coming in slightly higher. Those prices aren’t where Mark wants them to be, but even at current prices, the Deliverator is able to stand on its own value proposition. Less maintenance, lower fuel costs, the ability to generate even lower cost, home-grown fuel with rooftop solar or local wind turbines, and a more compact, flexible form factor.

Mark and the team are also working to streamline the design of the power electronics in the powertrain for its vehicles. “One of our big cost reduction initiatives is co-packaging all those components in the electric vehicle architecture,” he said. It’s a lot like how Tesla rolled all of the heating and cooling functions in the Model 3 into the Superbottle. Combining complementary functions simplifies the components and reduces unnecessary external interconnections. Ultimately, he believes there is an opportunity to save some money there as well. Finally, scale. As word gets out about Arcimoto’s vehicles and their cost-saving potential, especially on the Deliverator when it launches later this year, production volumes will continue to climb. Higher volumes enables better pricing from suppliers and leverages foundational systems and equipment for what translates to a lower production cost.

Arcimoto is planning to be at MOVE Americas in Austin in September and EVS33 in Portland, Oregon in June with its team and vehicles later this year.