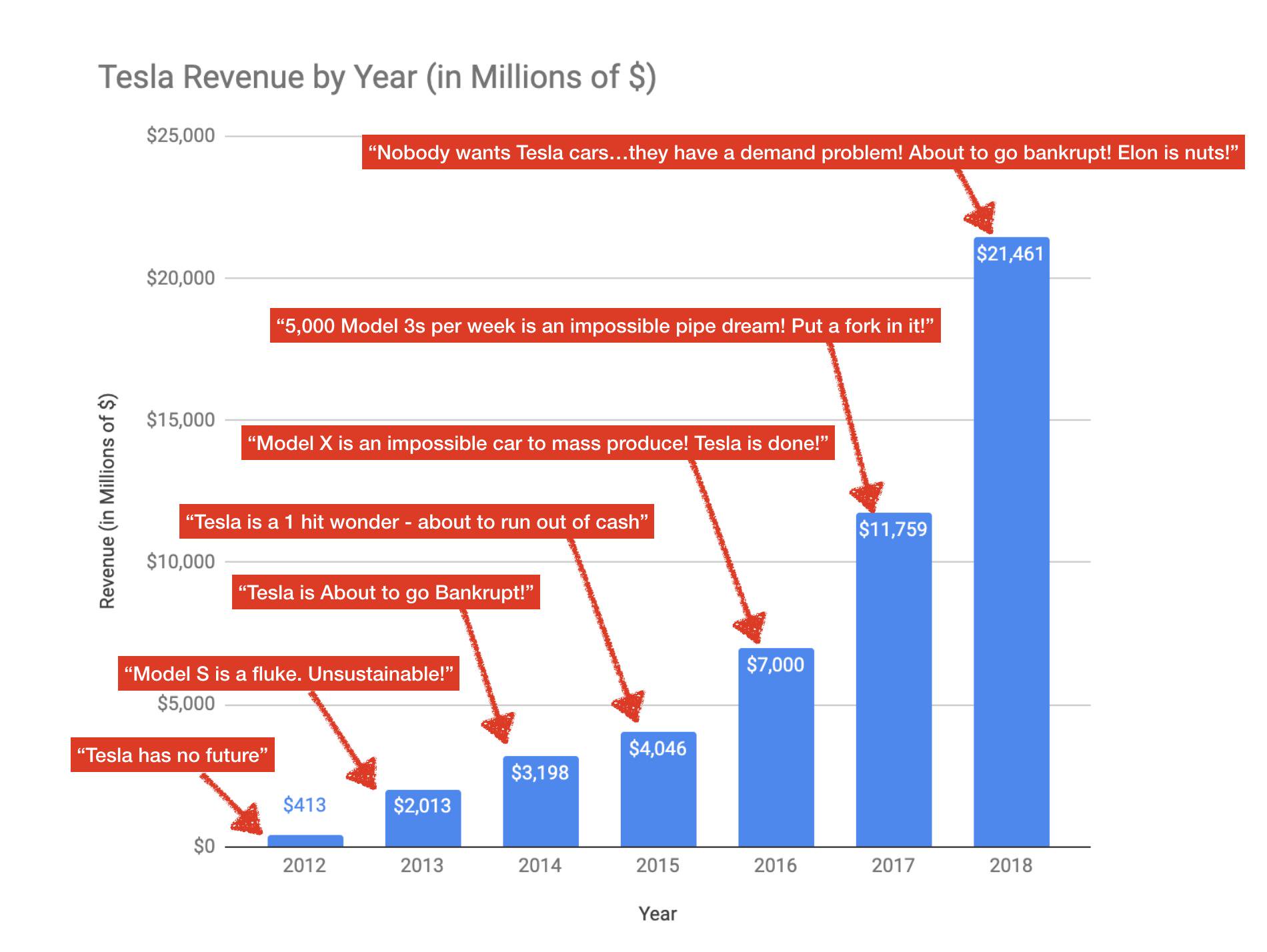 Several months ago, Hamid Shojaee tweeted out a superb chart highlighting both Tesla’s annual revenue growth and summaries of the consistently wrong claims of Tesla critics and skeptics. It was so brilliant that I wanted to write an article about it, but I never got to that. As it turns out, though, the chart is still relevant today. First of all, here’s the tweet and chart:

Yet again, 2019 revenue is going to show a sizable increase over the year before. In the 3rd quarter, Tesla showed a profit yet again, surprising the market and demonstrating for the third quarter out of five that it is able to push out a profit. As we roll through the 4th quarter of 2019, though, I consistently see critics claiming that the end is near, that Tesla’s not really making money (these quarterly profits have all just been accounting tricks or fraud), and that Tesla’s finances are actually in very bad shape. None of that makes sense to me, based on what I’ve seen, and I think the cause or purpose of those claims centers around a lack of context. People are losing the forest for the trees.

That’s what the chart above does so well. It puts superficial claims of the company’s imminent collapse in the context of 7 years of such claims. Every step of Tesla’s growth, critics and skeptics have said the company was at its peak and despite all the enthusiasm around Tesla’s recent (at the time) growth, it was going to be downhill from there. Of course, it’s been basically all uphill so far.

Will critics (especially ones who have been hovering over the company for a decade) ever give it up and move on? Or will they continue doubting Tesla for many years to come? It’s hard to say, but I think anyone who has been following the company closely for several years expects claims of Tesla’s coming bankruptcy to persist through the 4th quarter as well as into and perhaps all throughout 2020. Even if Tesla shows a profit again in the 4th quarter, they will find some way to spin “the future” in order to forecast armageddon and corporate collapse for Tesla. Perhaps the biggest question is not whether these forecasts will be put out there, but whether the people behind them actually think they’re true or simply have a vested interest in smearing the company.

In any case, thanks to Hamid for the great chart, and stay tuned for 4th quarter stats and predictable Tesla [TSLA] bear claims. If history tells us anything, Elon Musk could show up as the real Iron Man, report record-shattering profits, and still be smeared as a fraud who’s driving his company into the ground.

Full disclosure: I’m long Tesla [TSLA], because I think the company has a massive lead in some of the fastest growing large industries in the world as well as a corporate culture that results in rapid, effective innovation.

I’m also a Tesla Model 3 owner, because I think it’s the best vehicle on the market (or second best behind the Tesla Model X, depending on your needs and desires). If you’d like to buy a Tesla Model 3, Model S, or Model X and get some free Supercharging miles, feel free to use my special, magical, unicorn-blessed referral code: https://ts.la/zachary63404. You can also get a $100 discount on Tesla solar with that code. There is currently no use for a referral code when putting down a reservation for a Cybertruck or Model Y.

Appreciate CleanTechnica’s originality and cleantech news coverage? Consider becoming a CleanTechnica Member, Supporter, Technician, or Ambassador — or a patron on Patreon. Don't want to miss a cleantech story? Sign up for daily news updates from CleanTechnica on email. Or follow us on Google News! Have a tip for CleanTechnica, want to advertise, or want to suggest a guest for our CleanTech Talk podcast? Contact us here.
In this article:Tesla, Tesla financials, Tesla stock