Lots of ink has already been spilled over the new Ford Mustang Mach-E. With press leaks, bloggers breaking embargo, and even Ford accidentally publishing information about the vehicle, most of this information is already out there on the internet, and some of it is even in prior articles on CleanTechnica.

However, there are readers who haven’t seen the information yet, and the leaks didn’t cover everything, so we still need a sanctioned article that covers the basic information about the vehicle.

When it comes to propulsion, the Mustang Mach-E follows the same basic layout as Tesla vehicles. A drive unit sits between the rear wheels, and an optional drive unit sits between the front wheels. Small and compact, the units house the inverter, controller, other electronics, an electric motor, and a single-speed gear reducer that puts power out to the wheels with CV axles.

Lower packages for the vehicle will come with just the rear drive unit, while higher-end vehicles will come with a supplemental unit in the front for more power and better handling. Once again, this seems like something straight out of Tesla’s playbook, but the front unit is designed to mainly serve as a supplement for the rear unit. Given that a vehicle gets most of its weight shifted onto the rear wheels during a hard launch, it makes sense to prioritize power to the rear.

The most powerful model, the GT Performance, will come with 459 HP and 612 lb-ft of torque.

The battery pack, while different from Tesla inside, sits low in a “skateboard” configuration. Really, this is the only sensible way to build a small passenger EV. By slinging the battery low, you keep the center of gravity low, keep batteries out of the crumple zones, and preserve interior space. Ford decided to just do what works with this dedicated EV platform.

There are some key differences in the pack from what Tesla is doing. For one, the pack will use flat pouch cells instead of cylindrical cells. While seemingly difficult to cool (Nissan didn’t even bother to cool its pouch cells in the LEAF), Ford did put an extensive cooling system with aluminum fins between all cells to cool them as evenly as possible under even extreme conditions. When a driver pushes the car hard, it has active shutters in the lower part of the front bumper that supply extra air to the radiator to make sure the battery doesn’t overheat. This is where Ford had a real challenge on its hands. Not only did it need to make a great electric crossover, but it had to make one that wouldn’t be a black sheep in the newly growing Mustang family.

Ford did it, though. And did it well.

Ford couldn’t do a full-on long pony car hood, but it did manage to both make the Mustang Mach-E a bit longer than most electric crossovers, and the designers carefully fit in little styling cues to make it look long. Combined with instantly recognizable Mustang headlights, a semi-faux grille “nosecone,” and the aggressive front bumper splitter, the front of the car does look and feel like a Mustang should.

In the rear, Ford added some “haunches” above the rear wheel wells to give the car a Mustang look without having a flat area over a trunk. Rear three-segment vertical headlights look just like a Mustang, but are subtly split top and bottom. Like other Mustangs, it has sequential turn signals, but the bottom portion turns yellow during turning for a more modern look that doesn’t betray the original.

Finally, Ford’s designers managed to pull off a really neat visual illusion to preserve the fastback look any Mustang should have in the roofline. Yes, the vehicle is a crossover, but the top portion of the back of the roof is painted dark black. Lower down, they put the shape of the fastback in body color, so that it has room inside, is a crossover, but looks like a fastback. Most importantly, they managed to do this without making it look tacky or strange. The Mach-E’s interior was another challenge for the team. People expect the interior of a Mustang, but also want the extra room that a crossover EV with four doors is supposed to have, while still fitting like a pony car and being roomy. They somehow managed this.

The interior doesn’t have to plan itself around a transmission tunnel, but Ford designers did put a center console between the front seats. At the same time, though, they made it flexible enough to please the Mustang traditionalists (count me among them) while fitting in the needs of everybody else. They made it easy, for example, to flip up the center console’s top and make room for a purse in its place. Also, there are plenty of spots to both keep and charge our modern devices.

The rear seat area departs much further away from the cramped tradition of the Mustang. Because the vehicle is not a 2-door 2+2 model, people are obviously not going to want a big fake transmission tunnel between two rear seats. The vehicle comes with a very roomy (for a small crossover) rear seat area that can comfortably fit even adult men (at least two of them), and would work great for families with kids (count me among those, too). While it has a large, vertical center screen, Ford is taking a very different approach from Tesla. For one, it’s not ditching the screen in front of the steering wheel. Also, there’s an iPod-like dial at the bottom of the screen.

There’s also a frunk, and it’s not a tiny joke frunk. There’s room for a carryon or two backpacks. Or an ice chest. Or … it serves as its own ice chest with a drain. The frunk is fully hose-washable, so don’t be afraid to carry stinky fish, greasy takeout food, or anything else that you’d rather not have inside the car! 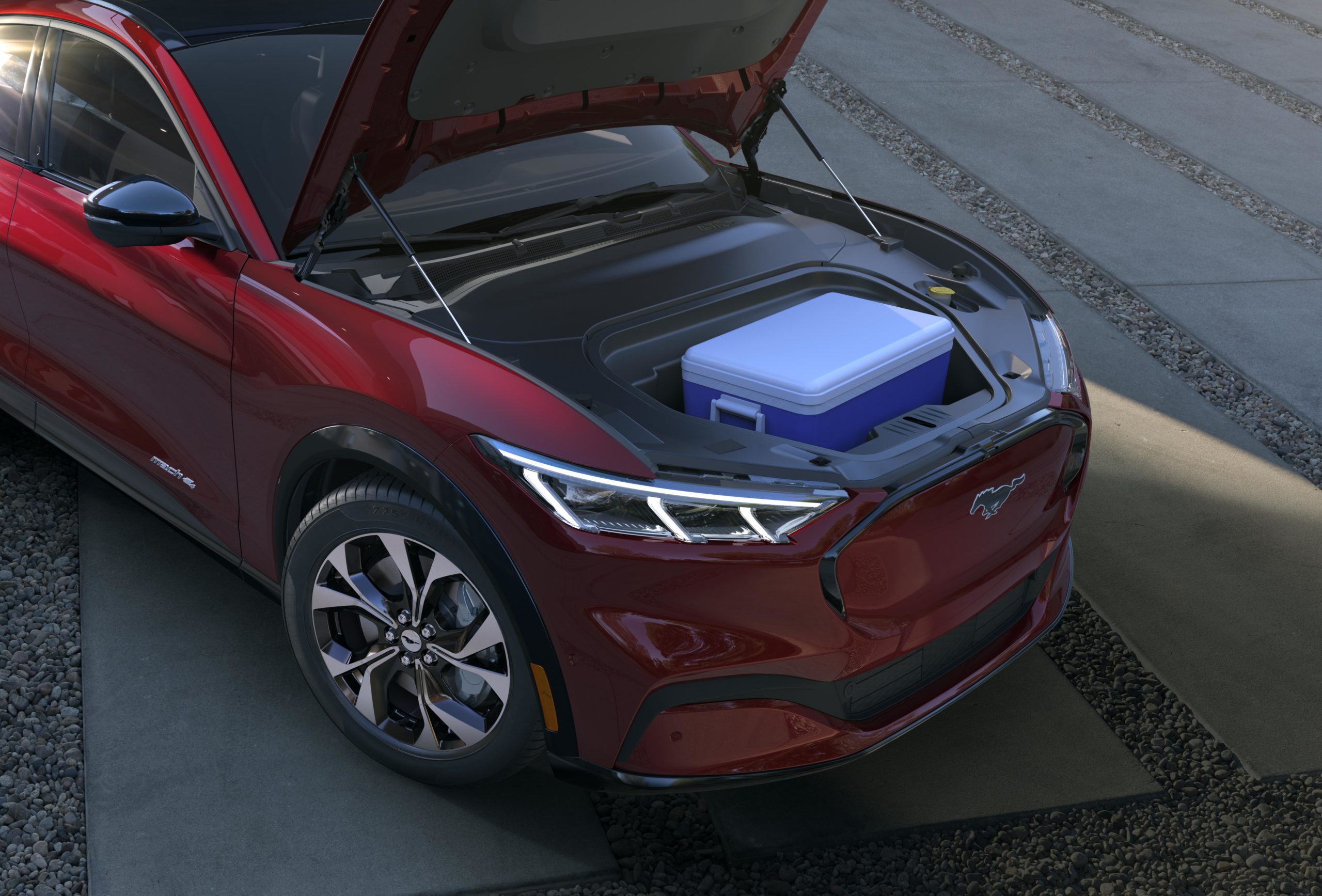 Finally, the Mustang Mach-E has a great sunroof. It’s not continuous with the windshield like a Tesla, but it does have plenty of viewing space. During my brief checkride, it didn’t get hot, even in southern California. Ford says it’s supposed to block enough UV rays and other things to keep the car comfortable even in the Southwest. Impressions From the Checkride

During a media event, Ford invited journalists to take a ride in a camouflaged prototype Mach-E. We didn’t get to drive it, but our expert test driver took us through a quick jaunt on the real streets of Hawthorne (passing SpaceX HQ in the process) and then through a quick slalom and acceleration course at the Hawthorne Airport.

For one, the acceleration is legit. It pulls hard with instant torque like you’d expect from an EV. They didn’t program it to mimic an ICE drivetrain, and didn’t pull any punches to take it easy on the tires.

Will it beat a P100D or the upcoming Roadster? No. But the Mustang was never really meant to be the fastest drag car. Pony Cars are supposed to be smaller multi-role sporty vehicles within the reach of the masses and young people. People are already asking whether this is a “Tesla Killer,” and that’s not really even the point.

Handling in the slalom was impressive. The skateboard battery placement’s naturally low center of gravity helps a lot with that, but it’s clear that they’re tuning the car for minimum body roll and great cornering, despite the heavy weight of the batteries. Despite this, the suspension didn’t beat the hell out of people in the car while driving over railroad tracks or other things real roads throw at us. Ford did its homework, and knew that charging is a real challenge for EV owners. For example, I have 10 apps on my phone to make sure I get the most from my Nissan LEAF. They knew that this wouldn’t fly if EVs are going to be mass sellers, so they put in a lot of work toward simplifying the care and feeding of a non-Tesla EV.

By partnering with various charging networks, they’re putting together a seamless experience that makes the process about as simple as driving a Tesla. The car has a trip planner like Tesla, estimating energy usage for speed and terrain. It knows where most rapid charging stations are, across multiple networks. Also, everything can be done either on the phone or the car’s center screen.

Perhaps more importantly, you can plug the car in at many stations and walk away without going through some process to get the charge started. Once again, arrangements with charging networks allow the vehicle to communicate with the charging station and get things started using the owner’s default payment method, much like a Tesla, but presumably with more setup involved before the first time.

For Level 1 and 2 charging, the Mach-E is doing things the way Tesla does it. Every Mach-E is going to come with a 120/240V “mobile charger” that can plug into different types of plugs you’d find in houses and RV parks. For those wanting something a little faster at home, there is a 48A Ford Connected Charger customers can have installed where they park. It can be programmed to charge at certain times and is controllable by the car and by smartphones.

There’s a lot more to say about this vehicle, but it’s entirely too much for just one article. Going beyond these basics, we are going to be presenting several different takes on the vehicle, its place in the wider EV world, and its place in the Mustang family.

Keep an eye on CleanTechnica, as our team is going to be spilling a lot more virtual ink about this vehicle over the next few days! Ford’s Silverton Factory In South Africa Is Getting A Massive 13.5 MW Of Solar PV →