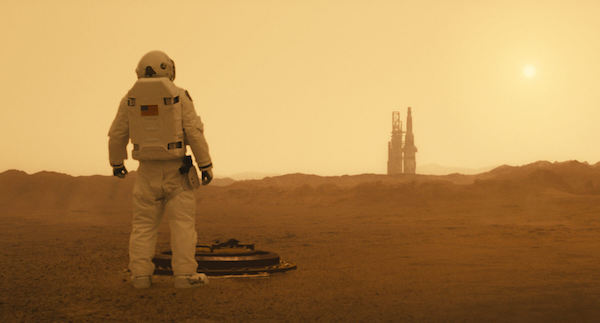 It was only a matter of time before screenwriters spiced up the classic Hollywood chase scene with a spectacular romp into a ground-mounted solar array. If the ground is somewhere out in space, so much the better. There is much more to the new movie Ad Astra than solar power and special effects, though, and with that in mind CleanTechnica spent some time on the phone with Robert Yowell, NASA engineer and technical consultant for the film.

The Human Heart Within Ad Astra

Ad Astra fits squarely into the mold of sci-fi movies that are so realistic, you may come out of the theater with a burning hunger that only a genuine Mars-grown potato will assuage.

That’s partly because the film looks and sounds real. But mostly, because it feels human.

At the heart of Ad Astra, Yowell emphasized, is the high stakes drama that takes place within the mysteries of the human soul, a story told through centuries of human history by firelight, lamplight, candlelight, and electric light without ever arriving at a conclusion.

“The movie has a very humanistic story about someone looking for his father, but are we alone?” Yowell explained.

Good question. How is it possible to feel alone on a planet teeming with life? And yet the little blue marble itself, and everyone on it, is spinning in perfect solitude through a vast, unknowable universe.

Maybe Dad really is out there, somewhere, only not in the way that we think.

Don’t just take our word for it, go see the movie! Meanwhile, Ad Astra offers solar power fans a lot to chew on when the topic turns to life in space. After all, what are we if not the physical manifestation of photons converted into — well, whatever we are.

On the technology side, solar power has a long history with NASA and the US space program, one familiar example in current times being the International Space Station.

In recent years NASA has also kept an ear open for the possibility of establishing a ring of solar satellites around the moon, or putting ground-mounted solar panels on the sunlit surface. In either case, cloudless days — and endless days — are an advantage that could counterbalance the weight, bulk, and expense of shipping solar equipment all the way out there.

Solar power is all well and good as far as the Moon goes, or Mars, from whence the solar-powered Insight is tweeting out updates on its activities (holiday getaways may be not far behind, so stay tuned for that).

However, venturing to the far reaches of the solar system takes you farther away from the Sun. Today’s solar cell technology would have to undergo a solar conversion efficiency bump by orders of magnitude to provide for the needs of a far-off space colony.

One solution that has crossed the NASA radar consists of massive orbiting solar arrays that could beam solar energy wirelessly to Earth, or perhaps farther into space.

Circling back around to Ad Astra, solar power actually plays a bit part. Yowell views some form of nuclear energy as the closest thing at hand for realistically traveling and sustaining life at the outer rim of the solar system.

That’s reflected in the fiction-as-fact approach to future technology in Ad Astra. You can’t just shout “warp speed!” at today’s audiences and expect them to come along for the ride. Some form or other of nuclear energy fits the bill, by binding the future to the present.

In fact, energy itself is the MacGuffin in Ad Astra — the plot device that kicks off and sustains the film’s narrative thread — but we’re not giving anything away. Go see for yourself.

Meanwhile, here on Earth solar power is contributing to the renewable energy transition in some interesting ways.

Among the latest developments is “agrovoltaics,” in which ground-mounted solar arrays can support pollinator habitats, grazing areas and certain types of crop production.

Another interesting new twist is the emergence of solar-wind hybrid power plants. That’s a lot trickier to engineer than it may seem, but utility-scale hybrids are becoming a thing. At the smaller end of the scale, solar-wind hybrids could also help open up new markets for the small wind industry, which could use an extra push.

Got any thoughts about the use of solar power in outer space? Drop us a note in the comment thread.

Have a tip for CleanTechnica, want to advertise, or want to suggest a guest for our CleanTech Talk podcast? Contact us here.
In this article:Ad Astra, Electricity, Energy, films, movies, Renewable Energy