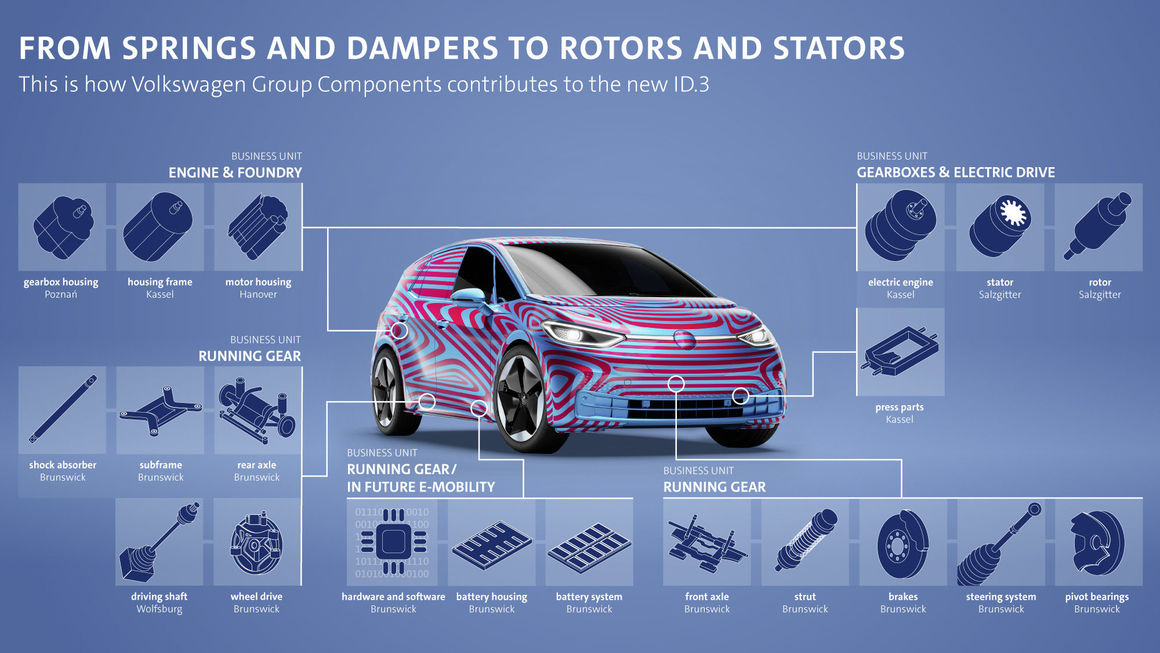 Pre-production examples of the Volkswagen ID.3 have begun rolling off the assembly in Zwickau, Germany. Before traditional car manufacturers introduce a new model, they build a few hundred or a few thousand pre-production vehicles. These are used for real world testing and for determining if the assembly line has got its sums right. They are tested for cold and hot weather performance, their fit and finish is rigorously assessed, and any issues or defects are reported back to management so changes and improvements can be put in place before final production begins.

According to a company press release, components for the new car are being manufactured at various other factories that are part of Volkswagen Group. The Kassel factory will build the electric drivetrain for all Volkswagen products for the European and North American market that are based on the new MEB electric car chassis. Components for those drivetrains are supplied by other factories in Salzgitter, Poznań, and Hanover. Saltgitter is where Volkswagen plans to build a new battery factory in cooperation with Northvolt.

The Kassel facility also works closely with the Volkswagen’s Tianjin factory in China, where the electric drive is produced in parallel for the Chinese market. Together, the two plants will produce up to 1.4 million electric drives each year beginning in 2023.

In addition to the electric drive, load-bearing components and body parts for the ID.3 are also produced at the Kassel factory, including the frame for the battery box, damper mounts, cross members and the central tunnel. The platform parts from Kassel are then delivered to the Zwickau plant to complete the vehicle body.

Volkswagen’s Brunswick factory develops and produces the battery systems that will be used in ID vehicles. It is there that battery cells are assembled into finished battery packs. A new factory as large as 9 soccer fields will be ready by late 2019 and will produce up to 2,000 battery packs a day. Those packs will then be shipped to the Zwickau factory where final assembly will take place.

“The success of the ID.3 start-up marks a milestone for our Group. Volkswagen Group Components supplies core components for this vehicle. The shared responsibility for the success of the ID.3 start-up is at the same time a commitment and an incentive for us. We are concentrating on modifying our plants to manufacture new products for electric vehicles. Certain plants are being specialized and at the same time we are making use of the synergies through the manufacturing of components within the Group.” says Thomas Schmall, chairman of the board of management for Volkswagen Group.

The ID.3 is not scheduled to go into regular production until the middle of 2020. In the meantime, Volkswagen is intent on making a car that exceeds the expectations of the most ardent EV fans. It is going to have to be a superior electric automobile if it hopes to compete with the Tesla Model 3.