Critics of Tesla like to call anyone who likes what Tesla is doing, who buys its products, or who invests in the company “fanboys” and “fangirls,” often accompanied by a negative adjective or five. I only know a few fans on Twitter who actually send unfunny or weird texts. The rest are normal people and actually pretty hilarious.

Elon is on Twitter because he wants feedback, and he likes to have fun. He is not into screaming fans like some kind of insecure pop star or diva. The good news: His fans aren’t screaming — they are writing history together with him.

Elon likes to joke about having a cult, but it seems that many people don’t get his humor (or pretend to not get it) and freak out whenever they hear about this. Let’s take a look at the leader of the “cult” for some perspective: 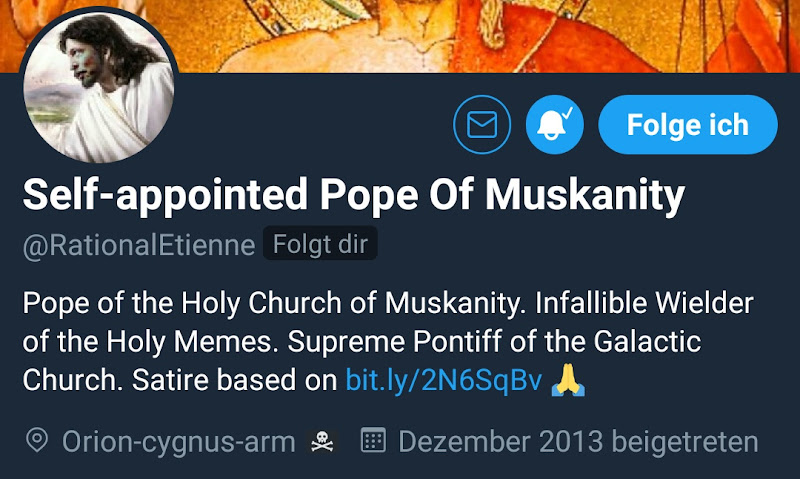 Oh, it’s just a satire account fighting for a better future! People like this, in their own way, fight against short sellers while trying to keep everyone sane. This person is a role model, not an obsessed psychopath. He or she is using humor to highlight the absurdity of certain criticisms — not actually advocating for cult-like behavior. Please research before you judge! At least take a look at the biographies.

By the way, Steve Jobs is back from the dead to help you understand everything about Tesla. Mr. Jobs calls people out routinely for making horrible arguments or for simply losing focus. He clearly is no fan of laziness or complacency. 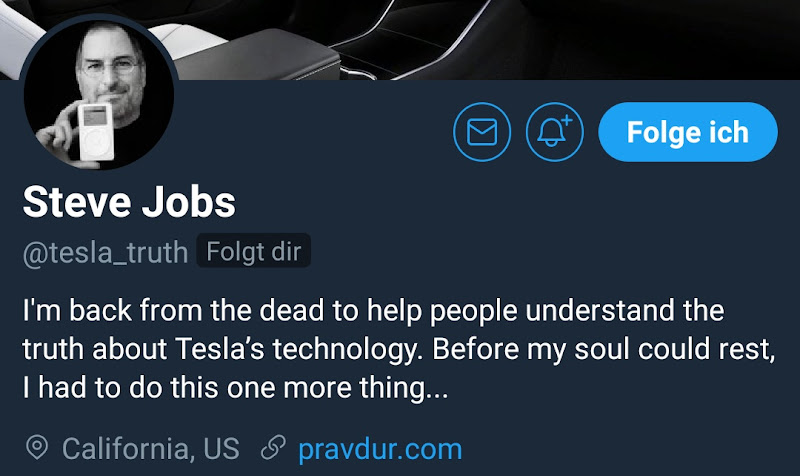 When spending time on Twitter, I personally differentiate between the very helpful people and the people who mostly post pics of their Teslas. They are both promoting Tesla in their free time because they care about the environment. (Well, some just care about their cars, but we open our arms to them, as well.) In total, there is an enormous population of Tesla supporters on Twitter. Some support the mission by occasionally posting pics or smiles, while others spend an hour (… or more …) a day on Twitter trying to help communicate the correct message to the world. Some simply pop on to send Elon a note about a bug, feature request, or customer complaint. To each their own — all of these kinds of interaction can help the company, and thus the world.

Every time Elon posts something, there are random people who put weird comments under his tweets. I think that he is pretty annoyed about this nonsense and wonders why so many people don’t realize that they have the opportunity to change the world together with him. But the abnormal thing (for a CEO like this) is that he does read through the responses (maybe ~1% of them, but that’s still a lot) and bears the annoyance of the trolls and bots in order to collect useful feedback and engage with the broad community of Tesla owners and supporters.

Elon has a pretty dark humor and appreciates the good memes and jokes he reads — he must come back a bit simply for those, as well. If you are tempted to engage but don’t know what to say to Elon, perhaps just send him a meme or try to make him laugh — helping Elon to relax must be helpful at times!

Elon’s Twitter supporters often own some Tesla shares, because they deeply believe in the company and are able to identify the difference between facts and some of the utter nonsense out there. Some big investors defend Tesla on a daily basis — Scott Wainner and Ross Gerber for example. These investors are not extremely obsessed with Tesla and don’t hate other carmakers. They simply care about the environment and think that Elon isn’t bullshitting anyone. To be honest, it’s pretty obvious that he hates bullshit.

People with common sense, who help others on a daily basis, is what the world needs. There are enough stubborn celebrities and certainly enough stubborn Joe Schmoes. Many celebrities are living in their own comfortable bubble, because they identify with a certain role and they don’t see the urgency to act now. Imagine if they used more of their influence for good. Some do chime in and support Tesla from time to time.

Of course, in the Tesla Twittersphere, there are also relatively inactive people who simply like SpaceX and Tesla. They simply cheer Elon on, and certain critics or Tesla haters somehow have a problem with that. What is wrong with being happy about an electric car revolution and a revolution in the space industry? What is wrong with wanting to make people laugh? Do we even have to call them “fans?” Can’t we stop thinking about power dynamics or team sports and start thinking about productivity? Call them “supporters” or call them by their name. Life is a giant group project and Elon is simply the leader of several very important projects.

As Elon already said in his interview with Joe Rogan: “This may sound corny, but love is the answer!” Other members of the Musk family are also awesome, on Twitter, and supportive of missions to help the world. You can see that ethos is in their blood.

Overall, though, one thing is clear: many of Elon’s tweets are aimed at having fun, and that’s also the case across the Tesla Twittersphere. Satire is abundant. Try to find as many funny accounts on Twitter as you can! I really recommend checking out “Not Elon Musk” (@elonmusk_not). [Editor’s note: I’ll throw in @BarkMSmeagol, @ICannot_Enough, @28DelaysLater, @TeslaHistorian, @facts_tesla, @TSLAQQ, @AlterViggo, and I’m sure many others I’m forgetting right now.] These people are savages who protect you and they are definitely not weird nerds. The reality is that the real Elon Musk is savagely working to protect us and some people simply realize how egocentric they are whenever they hear about him and can’t stand it.

Sometimes critics (as you can tell, they are abundant on Twitter) are simply unable to understand the mission behind Tesla and its development path, but he even wrote a master plan explaining it — and then another when the first one was almost accomplished. Sometimes, in response to the incessant illogical attacks, it seems that Elon decides he should simply entertain more people. If for no other reason, I can recommend checking on Elon’s Twitter feed from time to time for that entertainment.

As a final note, you may have noticed that carmakers generally don’t give a damn about the environment, but they are now at least inspired to develop and sell good electric vehicles, thanks in large part to Tesla. A few supporters want Tesla to become the #1 automaker in the world. The rest of the Tesla community simply wants to support high-quality products. if anyone has a problem with that, I say: Take a chill pill, sit back, and let them do their thing! Or help them.

Lauren Row joined Twitter a year ago. She is using her artist name. In the real world, she is studying online marketing in Germany. After analyzing different companies, she decided to help Tesla on Twitter on a daily basis. Lauren informs others about ideas which have the potential to create a better future.

Don't want to miss a cleantech story? Sign up for daily news updates from CleanTechnica on email. Or follow us on Google News! Have a tip for CleanTechnica, want to advertise, or want to suggest a guest for our CleanTech Talk podcast? Contact us here.
In this article:Carbon Emissions, Elon Musk, memes, Space, Tesla, Tesla Model 3, Tesla Model S, Tesla Model X, Tesla social media, Tesla twitter, twitter