The Danish auto designer Henrik Fisker — the mind behind the original Fisker Karma plug-in hybrid, amongst a great many other cars — recently gave an interesting interview that seems worth sharing bits of here.

The Danish auto designer Henrik Fisker — the mind behind the original Fisker Karma plug-in hybrid, amongst a great many other cars — recently gave an interesting interview that seems worth sharing bits of here.

With the launch of his new Fisker EMotion EV still a couple of years off, it can be easy to forget about it, and to focus rather on the Tesla Model 3 or the new Nissan LEAF, but it’s worth keeping an eye on things when you consider how wild some of the claims made to date by Fisker have been. On that note … the Fisker EMotion will apparently be using 21700 cylindrical cells from LG Chem with NCM (nickel-cobalt-manganese) cathode chemistry in its battery pack, so some of Fisker’s earlier comments seem to have ended up not being accurate. Fisker still claims that the EMotion battery packs will possess the “highest energy density in the world” — but I suppose that we’ll have to wait to find out if there’s truth to that claim. Fisker is still promising a single-charge range of more than 400 miles, it should be noted.

Long-term plans center around solid-state battery technology, interestingly. This tech, which will reportedly utilize graphene, won’t be ready until “probably” sometime after 2022 or 2023, according to Fisker. To be clear, there’s a lot of hype around solid-state batteries and they are generally seen as the future of EV battery tech, but timelines for their mass commercialization and use in EVs are always several years out seemingly because no one knows how to actually “get there” yet. Research is being done, improvements are being made, but it seems there is no path clearly identified for making it to that final step. 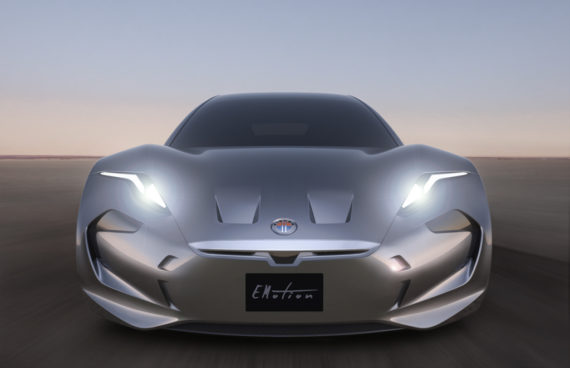 Back to Fisker, Autoblog provides more: “It’s not settled where Fisker will build its first car, the $129,900 EMotion EV, yet. The company is looking to buy an existing factory but hasn’t chosen one yet. Henrik Fisker tells us they’ve looked at a few, but with no hint of pressure in his voice, says, ‘We don’t have to make a decision until the end of the year.’ Fisker expects to begin producing the EMotion in 2019.

“The Fisker EMotion is powered by two electric motors, one in the front and one in back, giving it all-wheel drive. Fisker told us the EMotion has ‘a new type of electric motor that we are working on together with a very large supplier.’ He said it’s efficient, light, and compact, but declined to offer up other details, including output.

“… Fisker’s not happy with the idea of stopping at a destination, such as a mall, where it takes an hour or so to charge (assuming there’s a charging point available). Instead, Fisker envisions a new standard of chargers, which he calls ‘UltraChargers,’ located at gas stations, that add 100 miles of range in nine minutes. He tells us his company is in talks with big oil companies to install these UltraChargers at their retail locations. While the Fisker EMotion will be an expensive vehicle, it’s this charging technology that he thinks will eventually get the masses into EVs. But what is it?”

Many of you may be intrigued at this point. We are, but with a healthy bit of skepticism. But we can say that Fisker seems to be going about things in a unique way.

Fisker stated, “We are working on this new charging, which is a different type of charging. It’s not a cable, and it’s not inductive charging. We can’t really reveal it yet — we’re working on prototypes right now — but I think this could be a new standard where you actually don’t even have to get out of the car to charge the vehicle.”

Autoblog adds: “Boy, did our ears perk up at that. Without getting into too much detail, Henrik Fisker told us that his company is working on prototypes for this new type of charger with ABB, a European provider of fast charging infrastructure. The EMotion will still be able to use the same types of charging stations we have today (it will use the CCS charging standard), ‘but we also want to launch it with this new type of charger, which we think is pretty exciting,’ Fisker said, ‘and a game-changer’.”

Perhaps they are talking about this kind of charging tech?

Overall, it’s an interesting bundle of comments, though when you consider how mercurial Fisker can come across, who knows how things will play out exactly? If nothing else, the EMotion certainly sounds like a very interesting product.

As a bookend to this article, I’ll note here that Fisker was quoted as saying that he thought EVs would achieve a 20% market penetration rate in the US within 10 or so years, and a higher rate in markets elsewhere that incentivize them more.