The European passenger plug-in market had more than 21,000 registrations last month, up 48% over the same month last year. Year-t0-date, the market is up 27% this year, with the EV share standing at 1.4%.

With quality control issues solved in the second half of the month, the Renault Zoe was once again Master in Command, with the BMW i3 and Outlander PHEV recovering some ground over the ageing Nissan Leaf. #1 Renault Zoe — With certain quality glitches now a thing of the past, the French Zoe was back at its usual self, landing 2,095 registrations, up 26% YoY (year over year). That was enough to win for the 5th time in a row the monthly best seller trophy in Europe. Overcoming these hiccups, the model performance increased across Europe. In its home market (France), it saw 1,230 registrations. In Germany, it saw 271, up 17%.

#2 Mitsubishi Outlander PHEV — After a series of depressing months, the Japanese SUV has finally found a dosage of bright sunshiny days again, ending May in second place across the continent. It had 1,842 registrations, up 28% YoY. Mitsubishi found a new golden neighborhood for selling its PHEV — with it this time being Scandinavia, more specifically Norway (343 registrations) and Sweden (297 registrations). So, it seems the good ol’ Outlander will continue to be a resident on the top 5 list. #3 BMW i3 — The German hot hatch was up 151%, reaching a respectable 1,629 registrations in May. This time around, 3 out 4 units sold were the fully electric variety, a great contrast with what happened 12 months ago, when the REx variety used to outsell the all-electric version. What extended range does, huh? Anyway, these are solid results for the BMW model, especially in Norway, which saw 410 registrations, all of them being fully electrics! The i3 also had a good month in its home, Germany (297 registrations) — well, relative to other months’ sales and other model sales there. Looking ahead, expect deliveries to slowly drop as people anticipate another revised version with presumably more range, coming later in the year. #4 Nissan Leaf — Thanks to deep discounting, this ageing hatch is resisting the newer offerings, reaching 4th place despite the growing competition. It even managed to grow 8% last month, to 1,378 registrations. With steady sales in its stronghold markets (France, UK, and Norway) and sales increasing significantly in Sweden (153 registrations, up 99% YoY), the veteran model is keeping momentum by appealing to a new demographic still untapped by EVs: Bargain Hunters. 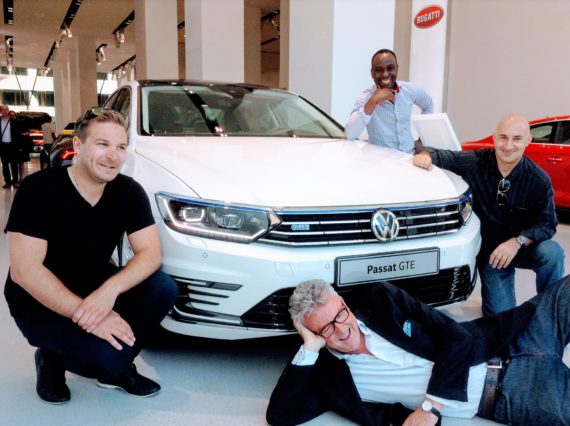 #5 Volkswagen Passat GTE — Back in the top 5, VW’s favorite PHEV company car recorded 1,170 registrations last month, its best result since January. The largest markets for the Passat GTE were Norway, with 340 registrations (sarcasm mode on — what a surprise!), Sweden (342 registrations) and Germany (177 registrations). With the right mix of space, electric range, and interior quality, expect this model to continue to be a regular here.

Looking at the YTD (year-to-date) ranking, the top positions remained stable (see disclaimer*), with the most notable change being the VW Passat GTE surpassing the Tesla Model S and reaching the #5 spot.

Other models on the rise are the BMW 225xe Active Tourer, now #9, and the VW Golf siblings (the all-electric e-Golf and its PHEV GTE relative), which are profiting from the restyled unit deliveries to recover previous positions. The Golf GTE is now in #14 and the e-Golf #15.

Looking below the Top 20, there are some hot sellers bubbling up, like the recently arrived BMW 530e (397 registrations, a new record), the Opel Ampera-e (Chevrolet Bolt in Eurospeak), registering 232 deliveries last month, and the Toyota Prius PHEV, which had 286 registrations … which is the nameplate’s best European result in four years.

Looking at the manufacturer ranking, BMW (20%) is comfortably seated on the top spot, followed by Renault (13%) in second place. The #3 position is being hardly fought by Nissan (11%), Volkswagen (10%), Tesla (9%), and Mercedes (9%). With the Wolfsburg brand now making the restyled Golf plug-ins at full speed, expect it to beat Nissan soon and race Renault for the #2 position. *Disclaimer: Due to some data adjustments in the April numbers, some models positioning were subject to changes regarding the previous article.