“Is Bigger Best?” Report — Part 2: Limits to Scale in Solar

Limits to Scale in Solar

The question of scale economies in solar has been both a technological and an economic one. As mentioned before, the contention in the late 2000s was that concentrating solar thermal power plant technology would outstrip solar photovoltaics (PV) because the latter was marginally more efficient (at the point of generation) and could incorporate energy storage.

Below is part two of our Is Bigger Best? report, a report released in September 2016. Conventional wisdom suggests the biggest wind and solar power plants will be cheapest, but where they deliver power, and who will own them, matters more. Be sure to read part one and come back for part three next week.

Frequently left out of that argument were the cost and loss of energy in transmission. In 2010 comments to the California Public Utilities Commission on the now­-constructed Ivanpah concentrating solar power plant (called the Genesis Solar Energy Project at the time), transmission and generation expert Bill Powers explained that the cost of electricity from Ivanpah was likely to be higher than from distributed solar PV.

“There is no justification for…using an obsolete cost assumption to eliminate large­-scale distributed PV as an alternative to the Genesis Solar Energy Project…The assertion that the high distributed generation case is significantly higher cost than the reference case was incorrect in June 2009 and is definitively obsolete in June 2010.”

With energy losses varying from an average of 7% to a peak of 14%, the marginally better solar resource at its remote location was lost in transmission, especially when there was ample rooftop space to accommodate local distributed solar. The Ivanpah plant finally came online in January 2014, supplying power at 20¢ per kilowatt-­hour, although to date supplying less than two­-thirds of its anticipated output. For comparison, the 20-­year cost of energy from a distributed solar PV project completed in 2013 would have been 14.0¢ per kilowatt-hour with a 15% profit margin.

It’s also worth noting that the higher output from a concentrating solar thermal power plant is in part due to the use of natural gas to ramp up plant output in the morning. The Ivanpah facility consumed nearly 744,000 thousand cubic feet of natural gas in 2014, about what 8,400 Minnesota homes use in a year. 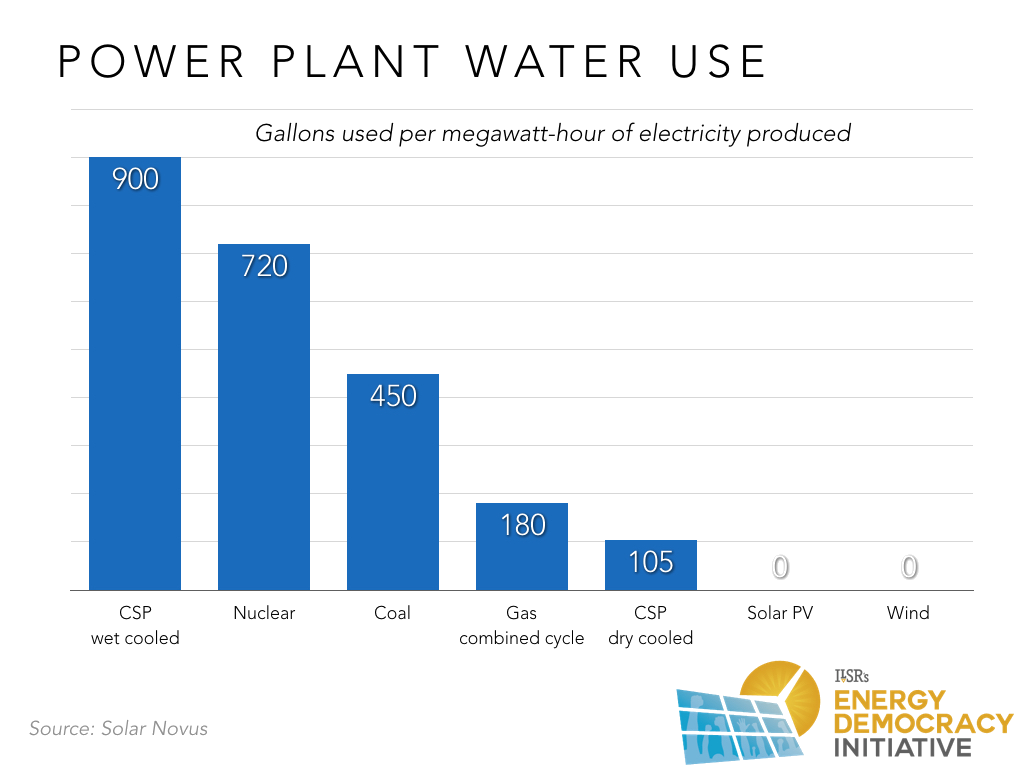 Over time, the cost parity of solar thermal electricity and solar PV disappeared, as the following chart shows. While PV costs have fallen rapidly, the cost of concentrating solar has not followed suit. 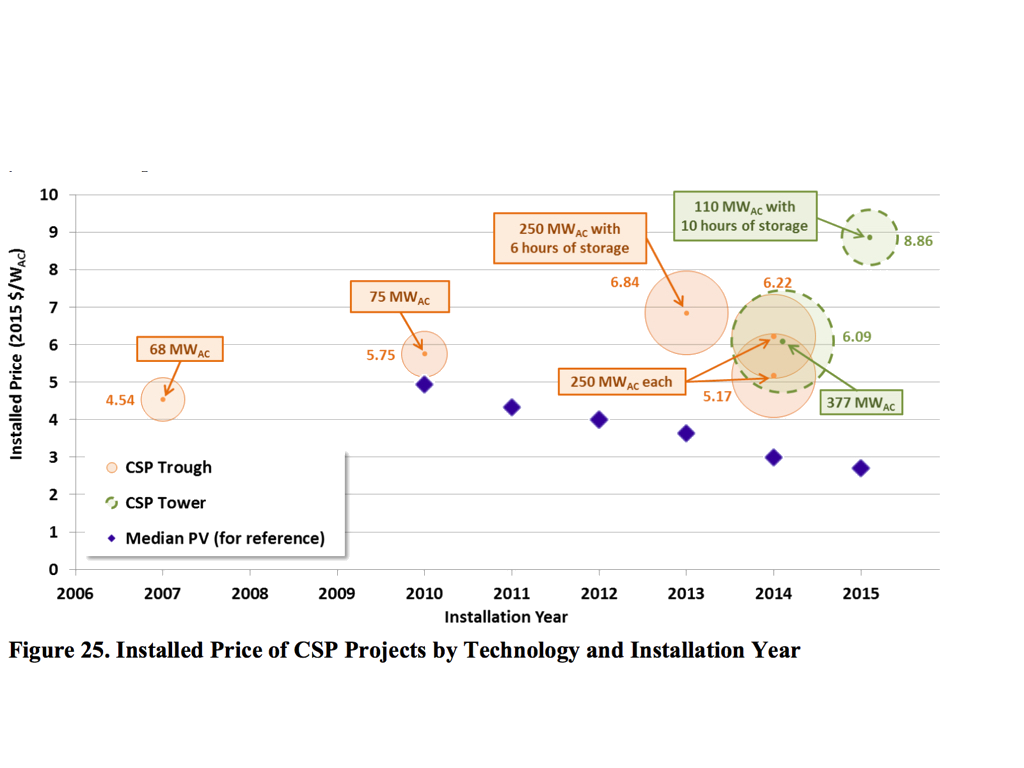 The prospects for continued reduction in solar PV prices remain good, given impressively lower costs in Germany and Japan. At least half of the differences can be explained by the gap in deployment, with three times the amount of solar deployed in Germany and Japan relative to the US. Other differences include “installation labor; permitting, inspection, and interconnection; [and] customer acquisition,” according to the Rocky Mountain Institute. 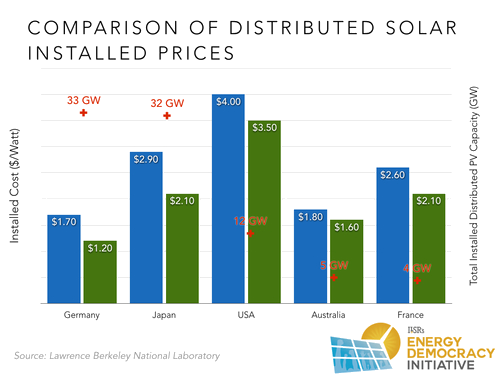 The availability of energy storage was (and is) another touted advantage of concentrating solar thermal, but it’s unclear that it can offset the significantly higher prices. Thermal storage at concentrating solar power plants is much cheaper per megawatt-­hour than batteries, and plants commonly have from three to six hours of storage. But since the thermal energy has to heat water and create steam, the response time from energy storage to useful electricity is in minutes rather than seconds. Early use of batteries, however, tend to be in providing “ancillary services,” such as maintaining a consistent voltage on the grid. These services require a relatively small amount of total capacity, but require a quick response. Shifting production from day to night has not proven economical.

On the other hand, as the prevalence of solar PV in California is shifting the electricity peak into the later evening hours, thermal storage at concentrating solar plants could become more valuable. So far, however, the challenges and costs of concentrating solar thermal have spurred a shift toward solar PV, even for large projects, resolving the technology debate in favor of mass­-produced solar PV.

The scale issue, however, remains a fight within the technology of solar PV. As mentioned in the introduction, the Brattle Group last year fired the latest salvo in the utility­-scale versus distributed solar debate. The group argues that resources should be disproportionately invested in utility­-scale PV, since it can produce electricity at half the cost of distributed PV.

In a set of 2016 reports on solar, Berkeley Labs and the Department of Energy’s SunShot initiative provided data on distributed and utility­-scale solar costs. This chart combines the two analyses, and shows that the sweet spot for low­-cost solar development is in the middle, rather than at the ends of the size spectrum. 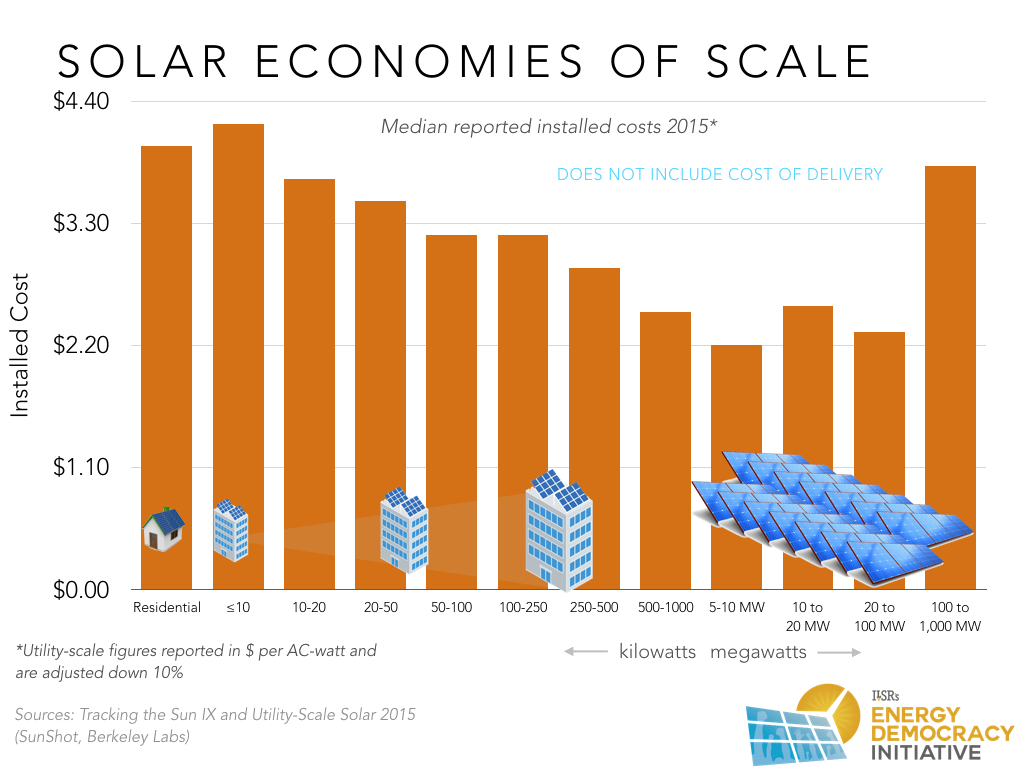 In the chart of upfront costs above, the largest utility­-scale projects are nearly as costly as rooftop commercial­-scale solar projects.

However, utility­-scale projects typically use panels that track the sun, with commensurately higher electricity output. The following chart, of the inflation­-adjusted levelized cost of electricity, offers a more accurate picture. We used the National Renewable Energy Laboratory’s System Advisor Model to generate a real, levelized cost of electricity for a $2.50 per Watt solar array of 6.71¢ per kilowatt­-hour (including the 30% higher federal tax credit), and adjusted accordingly for the other capital costs. Utility­-scale projects (those 5 megawatts and above) are assumed to have tracking, with 30% higher output and therefore 30% lower levelized energy costs. 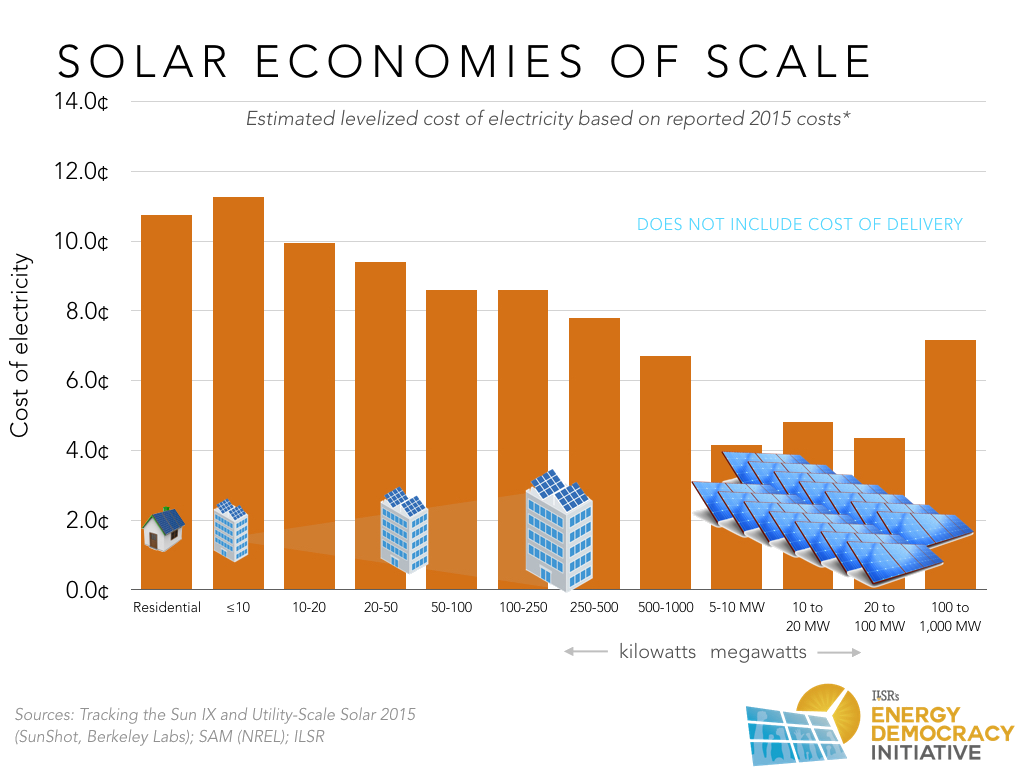 This chart seems to support the Brattle Group’s contention that bigger solar is better, aside from projects exceeding 100 megawatts.

But what’s still missing in this analysis is the price of competition. As noted in an ILSR analysis from 2015, utility­-scale may cost less, but it’s also worth less to the electric grid because of its remote location. The following chart replicates the levelized cost chart, but adds in the market price against which these various sources of solar compete.3 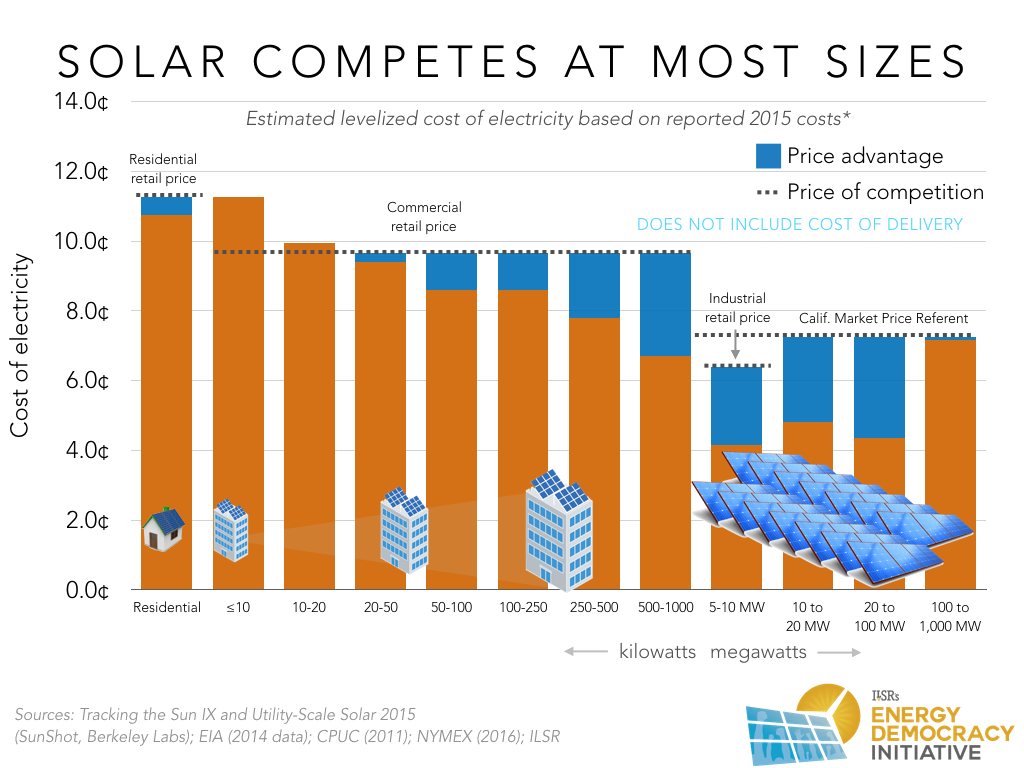 This chart shows that at most smaller sizes, solar favorably competes with the retail electricity price. The national average residential electricity price used for this chart is close to 12¢ per kilowatt-hour, but this price is 15¢ in California (and even higher in some states in the Northeast). Commercial scale solar also competes relatively well against average commercial retail electric prices of 10¢ per kilowatt-hour.4 Megawatt­-scale projects, connecting and competing into the wholesale market, compete against other new power generation, like natural gas, that produces electricity for 5¢ to 8¢ per kilowatt­-hour. Worthy of note, the rise of community solar projects looks to hit that sweet spot of cost and benefit, with projects typically between 250 and 1000 kilowatts, providing a cost­-effective way for those without a sunny rooftop (or enough capital to finance their own solar project), a way to participate.

While solar at nearly any scale is competitive, the price of solar from large scale solar projects does not include the cost of transmission for delivery, relevant for most projects over 5 megawatts.

Writ large, the cost of transmission is rising. In California, transmission costs for the three major investor­-owned utilities have been rising by nearly 10% per year. 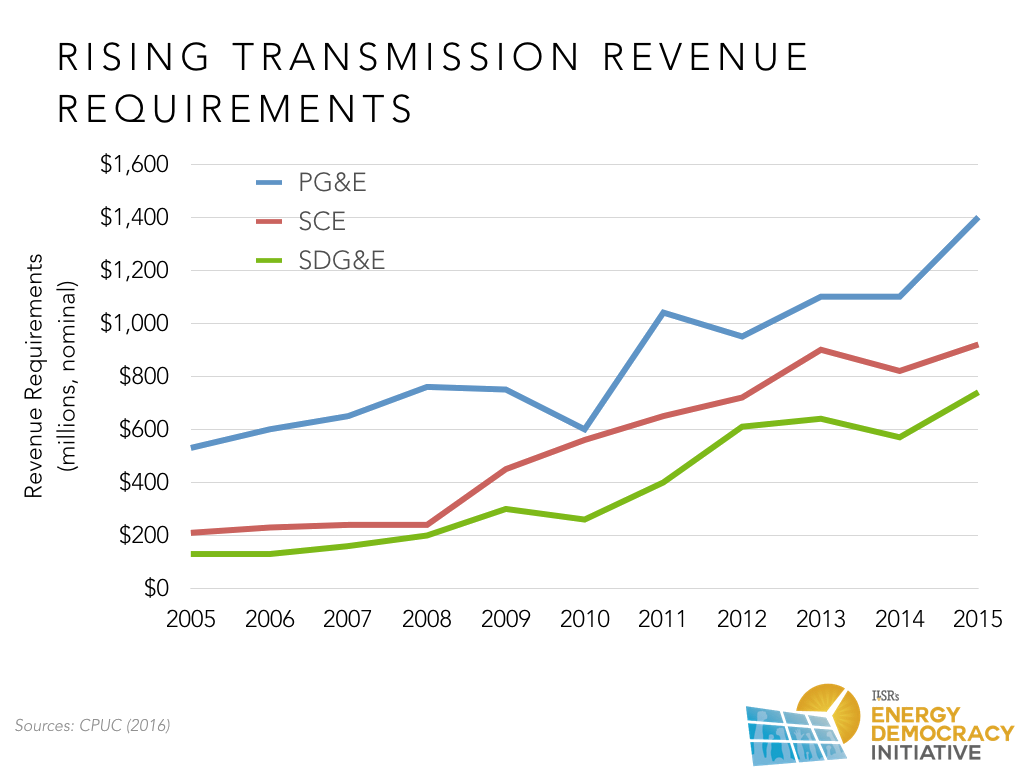 In contrast, there is a lot of available capacity on the distribution grid for smaller­-scale solar projects. From the same post as the chart above (emphasis mine):

A 2015 Energy Institute at Haas working paper, described here, performed a detailed analysis of Pacific Gas & Electric’s distribution grid and concluded that solar penetration equal to 100% of capacity on all circuits would require only small cost to accommodate [less than 1/1000th of a percent of the utility’s operations and maintenance budget].

San Diego Gas & Electric (SDG&E) has estimated that their grid can accommodate about 1,000 Megawatts of distributed generation. That’s equal to around 20% of the utility’s peak demand.

So big solar projects might produce somewhat cheaper electricity, but unlike your Amazon Prime membership, there’s no free delivery. And comparing utility­-scale and distributed­-scale solar misses an important point: they do not compete with each other on price.

Does Big or Small Grow Fastest?

A final contention in the size debate is whether, driven by the urgency of climate change, it is possible to most quickly deploy wind and solar in small chunks or big ones.

Although we can’t definitively answer this question, we offer two powerful anecdotes that suggest that big changes in renewable energy deployment come in packages of any size.

While the total capacity was similar, Germany’s focus on local ownership meant that much more of the economic benefit of its new solar capacity accrued to ordinary citizens, instead of incumbent utilities.

In Denmark, electricity had long been the province of cooperatives, so when the “feed-in tariff” program offered a guaranteed grid connection and a fair price on a 20-year contract for wind power in the early 1990s, many Danish citizens became part of wind power cooperatives. Wind energy capacity surged from around 500 megawatts to over 3,000 megawatts, and 80% of this wind energy was owned by 150,000 Danish citizens (3% of the population). On a per-capita basis, this would be the same as adding 150,000 megawatts of wind power in the US (twice the total installed capacity at the end of 2015). In the Danish example, wind power grew much faster when connected to local ownership, even though typical projects were just 3 to 7 turbines, each about 500 kilowatts in size.

Full report available at ilsr.org. For timely updates, follow John Farrell on Twitter or get the Energy Democracy weekly update.