There are now more than 100,000 electric vehicles on the roads of Norway, according to the Norwegian EV Association.

At an event celebrating the milestone, held on December 12th by the Munch Museum in Oslo (the museum for the guy that painted “The Scream”), Norwegian EV Association Secretary General Christina Bu stated: “We reached 100,000 battery electric vehicles (BEV) way earlier than most people expected. By 2020 our aim is 400,000.” Note that Norway’s bar above should be approximately 6 times longer.

The Secretary General continued: “Today we are celebrating 100,000 emission free battery electric cars on Norwegian roads. The present fleet cuts approximately 200,000 tonnes of CO2 emissions annually. Even though BEVs only account for 3% of the total passenger car fleet, we have achieved a substantial reduction. But there is more to come.”

The “more to come” part refers partly to the fact that the government of Norway is currently aiming for 100% of new vehicle sales to be zero emissions models by 2025.

The Secretary General also noted that, despite being a small country, Norway was having some impact on the global adoption of zero emissions vehicles.

“Norway inspires other countries to implement similar measures, and we show the international automotive industry how to create consumer demand for electric cars. We get ever more proof supporting this notion,” Bu stated.

“If we are to reach the ambitious climate goals set by the Parliament, we need to approach a population of 400,000 BEVs by 2020. That requires continuation of today’s policy, and even strengthening in certain areas.”

“In particular there is uncertainty about electric car benefits at the local level, regarding exemption from tolls (road and ferries) and parking fees. This responsibility has been delegated to municipal politicians, and they must be absolutely clear that they wish zero emissions a warm welcome. This means continuing the electric car benefits for another period, until they are fully competitive.”

Considering that there are well under 10 million people in Norway, the fact that there have been 100,000 zero emissions vehicles sold there over just the last few years is rather impressive. Most of the reason for the fast rate of adoption has been the generous incentives on offer in the country, something possibly of interest to governments elsewhere. It’ll be interesting to see if he country can hold onto its current position as a market leader much longer. 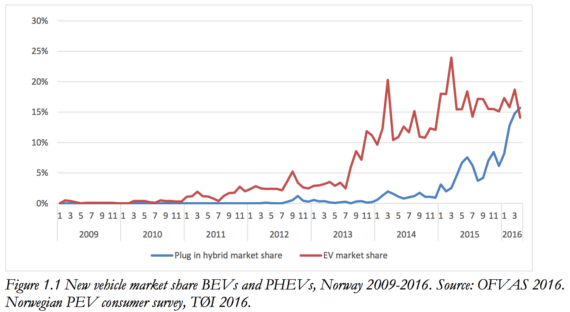 Have a tip for CleanTechnica, want to advertise, or want to suggest a guest for our CleanTech Talk podcast? Contact us here.
In this article:norway, Norwegian EV Association