A study commissioned by the Financial Times shows that the planet’s 20 largest national economies generated 8% of their electricity from renewable energy — solar, wind, and other green power sources — in 2015, up from 4.6% in 2010. (This does not include hydropower.)

There are huge differences among these nations. Overall in 2015, the European Union generated 18% of its 28 nations’ electricity. The United States generated about 8% of its electricity from non-hydro renewables in 2015, which included geothermal, wood, biomass, and biomass waste sources in addition to solar and wind. Pilita Clark reports:

Seven G20 members now generate more than 10 per cent of their electricity from these sources, compared with three in 2010.

The seven were led by Germany, home of the Energiewende — a policy shift towards green power. Renewables made up 36 per cent of its electricity mix, according to data compiled for the FT by the Bloomberg New Energy Finance research group.

The UK, Italy and France all generated more than 19 per cent of their electricity from renewables while Australia and Brazil reached 11 per cent and 13 per cent respectively.

Germany has tripled its renewable electricity output over the past decade. The nationwide Energiewende—energy transition—was enacted in 2010. Its goals include deep cuts in greenhouse gas emissions and increasing the amount of electricity generated from renewable sources to 45% in 2025 and more than 80% by 2050. Most of that juice will come from growth in installations using solar and wind sources. These currently generate about 30% of Germany’s total electricity.

Energiewende has come under sharp but misleading criticism for various reasons, including a significant rise in charges for residential electricity. However, half of those rising charges come from fees and taxes. Other criticisms have been directed at problems for the electrical grid from having so much renewably-based electricity without yet having in place the necessary infrastructure for moving it from where it is generated to where it is most needed. Critics also say the German phaseout of nuclear power should have its deadline extended because renewables won’t be able to fill the gap.

A slower phaseout of nuclear power had already been agreed on in 1998, but that was canceled when a new government came to power in 2009, and then reimposed after the Fukushima, Japan, reactor meltdowns in 2011. 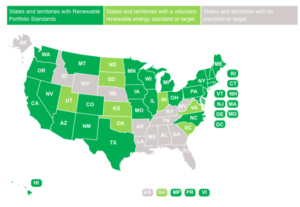 Twenty-nine states and D.C. have renewable portfolio standards mandating that a certain amount of electricity must be generated from renewable sources by a set date.

While advocates admit that Energiewende has these and other problems, they say they will be worked out over the long haul. Indeed, many of those critics claimed just a few years ago that it would be impossible to reach the levels Germany already has on anywhere near the timeline the planners had set for Energiewende.

Meanwhile, in the United States, there is no overall federal plan for a transition from fossil fuels to renewables. While President Obama has done more than any president in the past to make a renewably based energy system a reality, he has been hampered in what he can do by Congress—many of whose members are beholden to the fossil fuel industry—and by his own focus on an all-of-the-above energy policy that still promotes additional oil and gas drilling. Hillary Clinton has indicated that she will follow in Obama’s footsteps and boost renewables even more.

What is needed—but only possible by electing an amenable Congress—is a federal industrial plan using what has been learned from Energiewende and other programs to transform the U.S. energy system away from its dead-end dependency on fossil fuels.

A key element of any such plan would be a national “renewable portfolio standard.” Such standards (also known as renewable electricity standards) mandate that a certain percentage of electricity be generated by specific dates. Currently, 29 states have a mandated RPS. (This link takes you to an interactive version of the RPS map above.)

At the top of the heap is Vermont, which has set an ambitious goal of getting 75% of its electricity from renewables by 2032. California has set a goal of 50% by 2030, and Arizona a goal of 25% by 2025. South Carolina has a voluntary goal of 2% by 2021. Twelve states, all of them Republican dominated, have no renewable portfolio standards. Given this mix, the need for a national standard is obvious.

If we as a nation were truly serious about the climate crisis—which is, in great part, an energy crisis—we’d be treating the matter the way we did World War II. That is, we would pull out all the stops and bend industry and agriculture toward confronting the threat until it was eliminated. Or, as Neil deGrasse Tyson noted a couple of years ago: “Why can’t we summon the ingenuity and courage of the generations that came before us? The dinosaurs never saw that asteroid coming. What’s our excuse?”

Meteor Blades is a writer and contributing editor at DailyKos. He believes there is something profoundly wrong with our system — the unchecked accumulation of wealth and power into the hands of a very small group of corporate business interests has contributed to the wholesale corruption of our political system. For an understanding about the level of corruption in our country, he encourages you to view these two PBS documentaries: (1) The Untouchables; (2) The United States of ALEC.