New figures from the US Energy Information Administration show that global energy intensity continued its twenty-five year decline in 2015.

According to the US Energy Information Administration (EIA), global energy intensity, measured as energy consumption per unit of GDP, has decreased by nearly one-third between 1990 and 2015.

Further, energy intensity has decreased in nearly every region on the planet, with reductions seen in both OECD nations and emerging economies. However, the 25 year percentage change is more pronounced in non-OECD countries as compared to OECD countries.

The primary difference between OECD and non-OECD countries is the level of existing industrialization. Non-OECD countries are in the process of industrializing, and are therefore relying on more energy-intensive manufacturing techniques and other forms of energy use, whereas in the industrialized world, countries have transitioned to a more services-based economy that is less energy intensive. 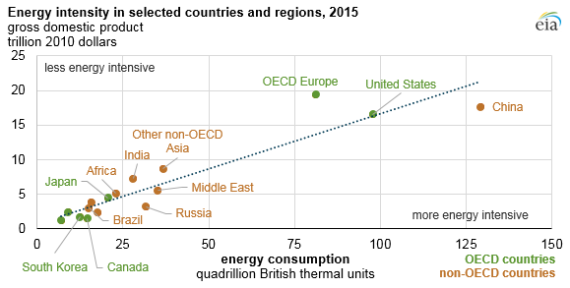 Unsurprisingly, as an extension of these necessities, energy efficiency policies are different between OECD and non-OECD countries. Appreciate CleanTechnica’s originality and cleantech news coverage? Consider becoming a CleanTechnica Member, Supporter, Technician, or Ambassador — or a patron on Patreon. Don't want to miss a cleantech story? Sign up for daily news updates from CleanTechnica on email. Or follow us on Google News! Have a tip for CleanTechnica, want to advertise, or want to suggest a guest for our CleanTech Talk podcast? Contact us here.
In this article:EIA, emerging economies, Energy Information Administration, Energy intensity, global energy intensity, OECD, US Energy Information Administration