This is part two of a two-part series from our recently released report, Re-Member-ing the Electric Cooperative by myself, Matt Grimley, and Nick Stumo-Langer.

Cooperatives across the nation are showing how to rely on each other and their members to create community-centric institutions that can overcome long-term reliance on dirty power sources and member disengagement.

With a recent ruling, the Federal Energy Regulatory Commission may have recently crashed one of the biggest gates to the cooperative clean energy party.19 For years, cooperatives have been hitched to wagon of large, coal-fired power generation through all-requirements contracts.

A few, like Delta-Montrose Electric Cooperative and other cooperatives went looking for local energy options. Unable to get resolution in direct negotiation, Delta-Montrose took Tri-State to the Federal Energy Regulatory Commission. The request was relatively simple: tell Tri State that it’s required to allow Delta Montrose to buy power from a proposed local hydroelectric power plant, even if it takes a bite out of their contract with Tri-State.

Although FERC didn’t accept Delta-Montrose’s rationale, they did accept their conclusion.

In requiring electric utilities to purchase renewable power from “qualifying facilities,” FERC said that the 1978 federal PURPA law supersedes the cooperative’s contract.20,21 Delta Montrose must purchase power from small renewable energy facilities in their service territory, and pay at least their own “avoided cost” of energy, e.g. the cost of the energy purchases avoided by the purchase from the qualified PURPA facility. This is a contested issue, with many utilities asserting that this is simply their wholesale cost to purchase a marginal kilowatt-hour of power. On the other hand, a FERC ruling in 2010 allowed that states could set avoided cost rates by technology, on the basis of the differing values of the renewable resources.22 FERC allowed that Delta Montrose could negotiate a power purchase rate.

The FERC ruling doesn’t allow Delta Montrose to develop more of its own clean energy resources outside its contractual limits, nor does it change where they get the balance of their energy supply: from Tri-State.

FERC noted two potential exceptions to the ruling that did not apply to this particular case. Some distribution cooperatives have transferred their PURPA purchase obligation to their wholesale supplier. In that case the power generator would have to sell to the wholesale supplier (e.g. Tri-State). Some utilities have received a waiver from their purchase obligation under PURPA, but only if there’s a competitive marketplace available for the generator to sell into other than the utility, an unlikely scenario for most cooperatives.23

Tri-State is now requesting FERC that it be allowed to levy a fee on Delta-Montrose for any lost revenues from the cooperative purchasing outside its contract. If they succeed, it will undermine the economics of buying local power for Delta-Montrose.24 However, FERC has opened the door for distribution cooperatives to purchase local power outside their contractual obligations, providing a novel level of flexibility.

Several cooperatives are adapting to the new era by bringing energy efficiency and renewable energy closer to home with the help of a federal program, and even a few cooperative ventures of their own.

The USDA’s Rural Utility Service’s Energy Efficiency & Conservation Loan Program allows rural utilities to borrow money at low rates – over 30 years at 3.3% – for energy efficiency and renewable energy improvements at their facilities or properties owned by customer-members it serves. The obligation to pay can be tied to the meter, allowing the energy savings and the financial obligation to pass from owner to owner of the property.

The bill-based financing can be particularly powerful at reaching disproportionately low-income cooperative members because the financing can be secured by the projected energy savings rather than a member asset (such as their home). It can also be provided without credit scoring that typically eliminates most low-income households from participation.

$6 Billion for Rural Energy Efficiency would…

But it’s not just for energy efficiency. What if $6 billion was invested in renewable energy like solar power?

$6 Billion for Rural Solar Energy would…

The cooperatives can also make money offering this program. The USDA allows utilities to re-loan the money to individuals at up to 1.5% interest above their own borrowing rate of 3.3%. On loans of $6 billion, rural electric utilities would have a margin of $59 million per year re-loaning the money to their members.

Roanoke Electric Cooperative has already proven that on-bill financing works well for its membership. Using $6 million in financing from the U.S. Department of Agriculture, Roanoke Electric Cooperative’s Upgrade to $ave program enables members to benefit from debt-free, on-bill financing for home energy upgrades.27 The program will assist 1,000 members-owners over five years, generating savings for all participants and saving the cooperative more than $2 million through reduced energy demand. Households participating in Kentucky’s How$martKY program have lowered their annual energy use by average of 5,500 kWh, a savings of 30%, or $624 a year.28 Other cooperatives with on-bill financing programs report similar savings. 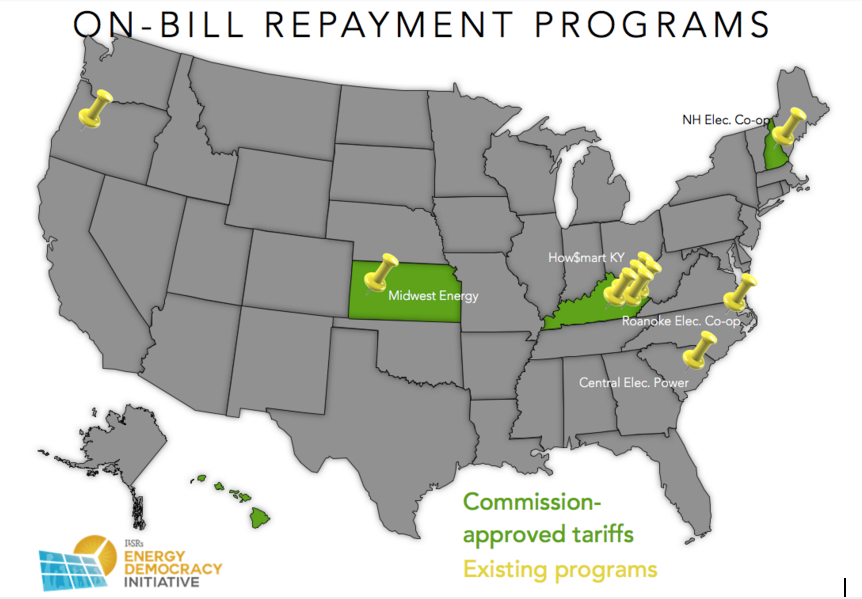 Electric cooperatives are also experimenting with community solar projects.29 The total is small — just 92 megawatts (MW), equivalent to only 0.18% of their overall power generation — but cooperatively-owned utilities are much more likely to experiment with collectively-owned generation than their municipal and for-profit peers. Below is a map identifying the 78 community solar projects throughout the country separated by ownership structure. The lion’s share is owned by electric cooperatives. 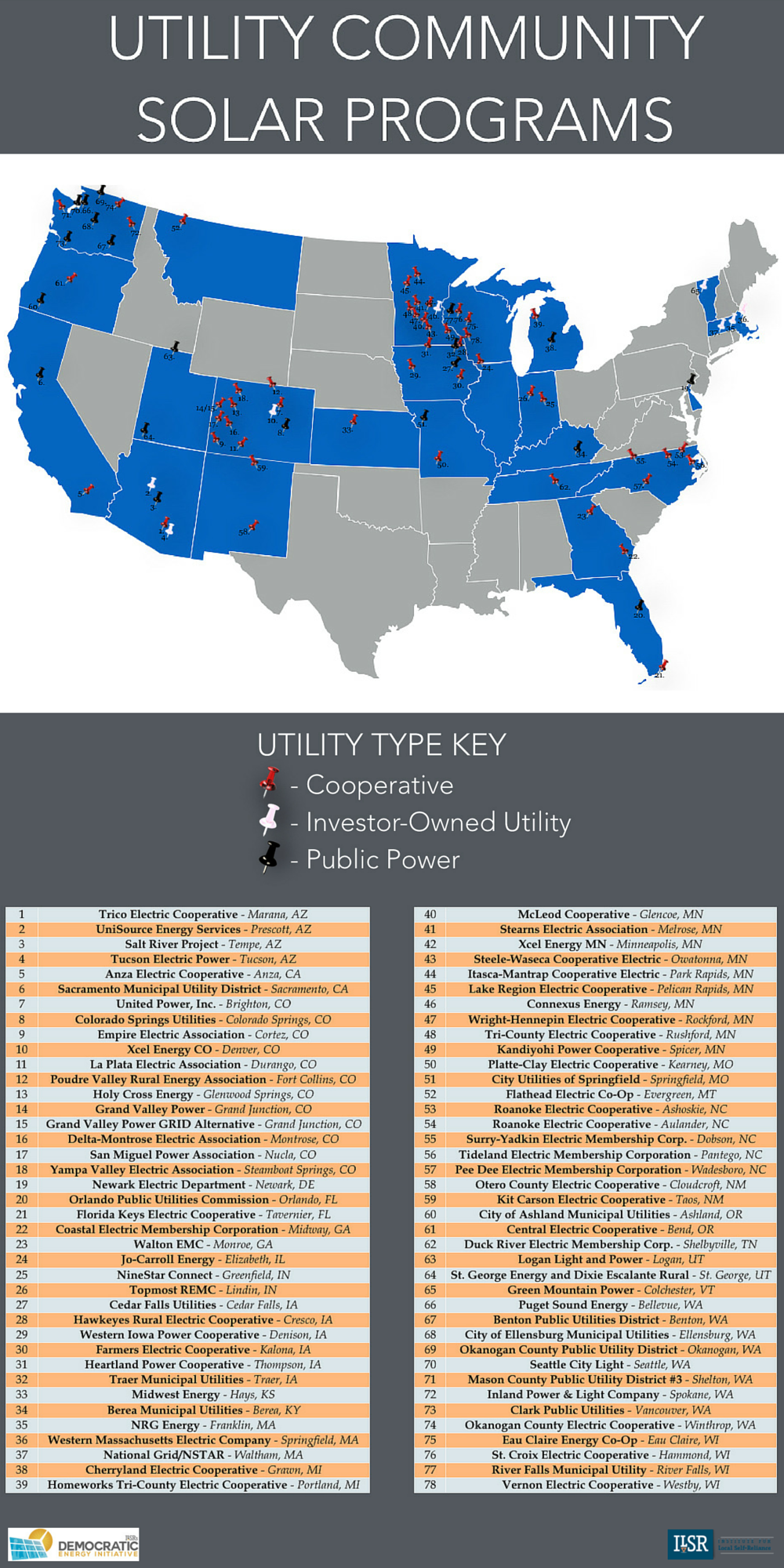 Some cooperatives have also added local renewable generation through their wholesale cooperative generation and transmission provider.30 Great River Energy in Minnesota added a 5 percent self-supply allowance to their members’ all-requirements contracts, anticipating the addition of resources such as community solar gardens. Great River then provided its members with solar, by building and financing up to twenty 20-kilowatt solar arrays in its members’ area. The projects are funded through a lease with CoBank. Each co-op is obligated to pay the G&T for the lease costs and for a buyout at the end of 10 years.

For many cooperatives, the ability to add community solar will be the first generation resource that qualifies under the 5 percent option. G&Ts in Wisconsin, Florida, and Michigan have tried other G&T-financed models for local solar development.

Other electric cooperatives utilize creative ownership structures to work around contract obligations, such as three cooperatives in Minnesota that actually sell solar energy back to their G&T.31 The cooperative leaders in renewable energy development often work without all-requirements contracts, relying on a mixture of partial-requirement contracts, wholesale market purchases, and energy project ownership instead. Farmer’s Electric Cooperative, which purchases half of its energy from the wholesale market, uses a homegrown feed-in tariff, community solar, and a green power purchasing program that have encouraged one-fifth of its membership to participate in renewable energy projects.32 The Kauai Island Utility Cooperative in Hawai’i now receives close to 40 percent of its energy from utility-owned and member-owned renewable resources while stabilizing sky-high electric rates.33 The Southern Maryland Electric Cooperative has built 5.5 megawatts of solar, and is proceeding on another 10 megawatt project, to go along with close to 1,000 of its members either owning or waiting to install some form of distributed generation. The New Hampshire Electric Cooperative, hitting their net metering cap that would limit rooftop solar, determined it was in their members’ best interest to permanently lift the cap. They lowered the compensation rate by 25 percent for residential customers (although they increased it for commercial customers) and will allow more rooftop solar development.34

At Jackson Energy Cooperative, Randy Wilson’s landslide loss wasn’t for naught. Proxy votes were outlawed shortly after the election in 2009.35 On-bill financing was instituted at the cooperative in 2010 as part of a pilot program with the Mountain Association for Community Economic Development. In 2013, an incumbent board member was defeated by a newcomer.

Other cooperatives have also reformed their ways through member-focused efforts. The Pedernales Electric Cooperative survived a scandal, and emerged with reform candidates on its board of directors. A member bill of rights was passed, opening up the elections, nominations, and giving members full access to records and meetings for the first time. The new board members formalized goals for 30 percent renewable energy in power capacity by 2020 and new energy efficiency savings.36

In 2010, community advocates of the Beartooth Electric Cooperative in Montana proposed bylaw revisions after bad management decisions over the coal-fired Highwood Generation Station were exposed.37 As the Highwood deal failed, Beartooth’s G&T cooperative went bankrupt. Beartooth successfully exited the G&T as a result of the settlement, and just last year saw their first rate decrease in a decade. According to the Northern Plains Resource Council, Beartooth is now one of the most transparent and member-responsive cooperatives in the state.

Cooperative members across the nation are demanding change and organizing. Groups such as Kentuckians for the Commonwealth have suggested a cooperative members’ bill of rights.38 Georgia Watch, a consumer protection advocacy group, even made a helpful study and checklist to determine if an electric cooperative is truly democratic.39 The Northern Plains Resource Council has made a chart for member-owners to easily see how their electric cooperative is performing (below). 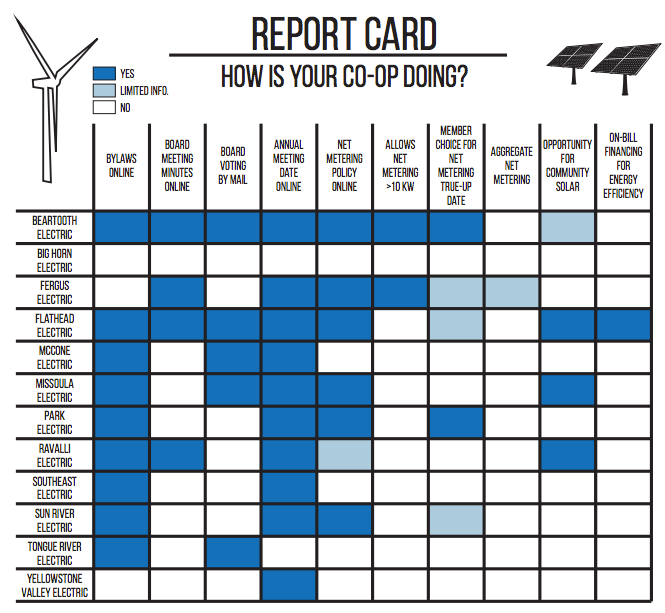 Electric cooperatives stand at the crossroads.

The heavy reliance on outsourcing their local authority has resulted in economic strains, tension between the local and generation and transmission cooperatives, and member disillusionment. At its worst, it has placed cooperatives in a nearly untenable net of long-term obligations for dirty and increasingly expensive power or in a scandal of abused member trust.

Fortunately, the solution lies in the best of the cooperative movement. Delta-Montrose and other distribution cooperatives are re-taking some of their local authority to emphasize clean and affordable local power generation. Roanoke and other cooperatives are providing low-cost financing to help members reduce energy costs and make the grid more efficient. Beartooth is modeling transparency and member engagement toward more effective stewardship of cooperative resources.

Cooperatives may face their greatest challenge since the inception of rural electrification in the 1930s, but with their members, they have the power to overcome.