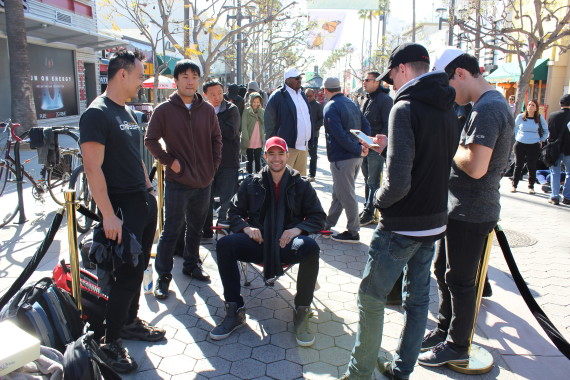 A week after the Model 3 unveiling, and Tesla is in the endzone doing a touchdown dance. A blog entry on the official Tesla blog boldly states that this past week was “The Week that Electric Vehicles Went Mainstream.” Elon also couldn’t contain himself and let the good news from the summary of reservations for the week overflow onto Twitter.

Over 325k cars or ~$14B in preorders in first week. Only 5% ordered max of two, suggesting low levels of speculation.

That’s tough to argue against, as the Tesla Model 3 reservation queue is massive, having now ramped up to a staggering 325,000 reservations worth an estimated $14 billion dollars in future sales.

Tesla is quick to note that this unprecedented product launch grew out of a grassroots effort and that Tesla doesn’t do any advertising. It is a bit mind blowing when considering that there are tons of commercials out there for Tesla… but all of them have been made by fans. My favorite is still this one… but there are dozens of others out there!

But the reservation numbers don’t tell the whole story, as the real fight to go mainstream has another 18 months to play out as Tesla scrambles to move the car from prototype into full-blown production. Per Elon’s own admission from earlier in the week, the demand for the Model 3 exceeded Tesla’s own internal expectations.

Token of appreciation for those who lined up coming via mail. Thought maybe 20-30 people per store would line up, not 800. Gifts on order.

With Tesla forecasting demand numbers that were so much lower than the actuals that came rolling… er… flooding in after the unveiling, one has to wonder how long it will take for Tesla to catch up with just these preorders. The blog post even closed with a hint of increased urgency, stating,

“We would write more, but we need to get back to increasing our Model 3 production plans!”

Considering the options, this is still a fantastic place for Tesla to be in, having brought in several hundred million dollars just in reservation deposits, earning top spots in mainstream media coverage which have all conspired to propel the brand into the lives of tens of thousands of new customers who likely haven’t even driven an electric car, let alone a Tesla.

The real question we should all be asking is not whether EVs have won or not… but can Tesla do what needs to be done to ramp up production and produce its first mainstream, full-production-scale electric car? Wall Street seems to think so, as Tesla stock ($TSLA) has bucked the trend of taking a dive after major product announcements, instead shooting up from $226 just before the Model 3 event to $265 yesterday.

The update closes by looping back to the beginning of the unveiling event, where Elon reiterated that the purpose behind Tesla, truly the reason for its existence, is to catalyze a transition to sustainable transport. While the Model 3 won’t make a huge dent in emissions on its own, the dozens of EVs that are sure to spring up from the reactions to the Model 3 — coming from mainstream auto manufacturers — are the real victory.

Model 3 reservations send the clear message that Tesla has built a superior product. The Model 3 is sexier, quieter, packed with more cutting-edge tech, filled with more supersplendulous glass… all adding up to the fact that customers just prefer it.

I would be willing to bet that there is a segment of people who put a reservation down for the Model 3 that don’t know it’s electric. A larger segment than that might not understand what it means that it’s 100% electric. Many more still won’t know (or care) that it’s a zero emission car. And larger still is likely to be the number of Model 3 reservation holders that don’t know that they just made history. That they just catalyzed a shift, triggered the inflection point, where EVs move from a niche treehuggermobile into a mainstream-because-it’s-better car for the masses.

But we know… and the generations that follow us will know as they look back on this week as one that shook the automotive world awake. A week that catalyzed a change that just might be enough to get people thinking about CO2 emissions.