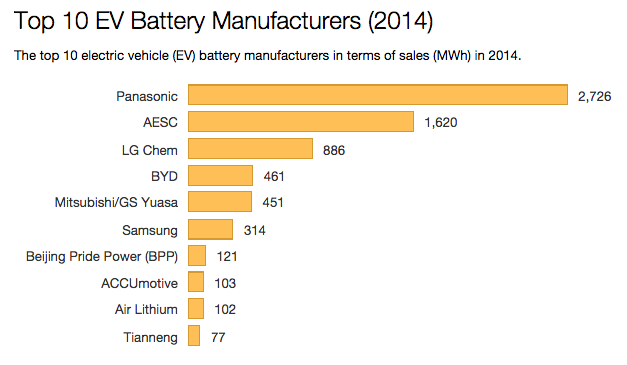 Editor’s Note: To someone who doesn’t follow electric vehicles and renewable energy closely, I imagine the battery storage market is one of the most boring things around. To anyone who is into these cleantech industries, however, battery storage is probably the hottest topic out there. It is for me. This short EV Obsession report on 2014’s EV battery storage leaders got me to lean forward. Hopefully it’s just as interesting to some of you. —Zachary Shahan

Comprehensive sales figures for EV battery manufacturers in 2014 recently became available, giving us further insight into the fast-growing market. Altogether, the year saw an increase of 54% over the previous year.

As far as the major players in the market, those haven’t changed, yet — BYD has definitely been growing in presence and market share.

With regard to the top of the pile, Panasonic came in with a market share of 38% — still the undisputed market leader. The company saw 2,726 megawatt-hours (MWh) of capacity sold.

Next up was AESC (the joint venture between NEC and Nissan), with a market share of 23% — 1,620 MWh worth of batteries sold. AESC has lost a fair amount of market share since a peak back in 2012 (36%). With Nissan looking more and more to LG, that share will presumably continue to fall.

BYD took fourth, with the success of the Qin doubling its market share — hitting 6%, up from 3% in 2013. Altogether, BYD sold 461 MWh worth of batteries. The rollout of the Denza means that this share should continue to increase.

Here’s some more from the EV-Sales blog:

Samsung has a partnership with BMW, and with the bavarian maker plug-in sales getting better and better, Samsung is experiencing a sales surge, it’s now #6 with 4% share.

Beijing Power Pride (BPP), battery supplier for BAIC, is first on a series of chinese battery makers, growing from insignificance to a small player status, BPP is now #7 with 2% share, but there are others, like Air Lithium in #9 (Kandi provider), Tianneng in #10 (Chery provider), and Wanxiang in #11 (That’s right, those of Fisker deal, they supply batteries for Zotye).

A final remark for batteries chemistry, Li-Ion batteries dominate the market, but now they only own 88% vs 92% the year before, because chinese battery makers (Like BYD or BPP) prefer LiFePo4 (8% share now vs 4% in 2013).

Altogether, an interesting year — and with the completion of the Tesla & Panasonic Gigafactory not really all that far off now, the next few years are looking set to be very interesting as well.

Don't want to miss a cleantech story? Sign up for daily news updates from CleanTechnica on email. Or follow us on Google News! Have a tip for CleanTechnica, want to advertise, or want to suggest a guest for our CleanTech Talk podcast? Contact us here.
In this article:ACCUmotive, aesc, Air Lithium, BAIC, beijing, BYD, GS Yuasa, LG, LG Chem, Mitsubishi, Nissan, panasonic, samsung, Tianneng, Wanxiang