At the end of July, the US slapped new import duties on solar products from China coming on top of earlier “anti-dumping” levies. These measures are damaging for US consumers, the US economy and the renewable energy sector, writes solar power entrepreneur Peter F. Varadi, author of a new book on the history of the PV industry. Indeed, it now turns out that even the vast majority of the US solar industry is opposed to them! So why does the government continue with this solar trade war? Varadi wonders whether the US Department of Commerce is trying to protect utilities from the solar revolution.

In a recent article on the website SolarWakeup (“Oh, For God’s Sake, SolarWorld, Shut The Hell Up”, 30 August 2014), author Chip Martin quotes Rhone Resch, President and CEO of the Solar Energy Industries Association (SEIA), who has this say about the latest round of import duties imposed by the US government on solar products from China:

“Enough is enough. The Department of Commerce continues to rely on an overly broad scope definition for subject imports from China, adversely impacting both American consumers and the vast majority of the U.S. solar industry. We strongly urge the U.S. and Chinese governments to ‘freeze the playing field’ and focus all efforts on finding a negotiated solution. This continued, unnecessary litigation has already done serious damage, with even more likely to result as the investigations proceed.”

Mr. Resch on July 28, 2014 informed The Department of Commerce (DOC) that the US Solar Industry is against its decision to levy import duties on the Chinese solar cells and modules (PV) and urges the US government to settle the matter expeditiously with the Chinese government. If Mr. Resch’s statement was not enough to influence the Department of Commerce I would like to add some reasons of my own why we should end this solar trade war.

The petitioner for this was SolarWorld Industries America Inc. a subsidiary of SolarWorld AG, a German company. It is not understandable why DOC would get the USA into a trade war with China based on the petition of a German company’s US subsidiary (and maybe six other US companies) when at that time (2012) there were based on SEIA’s web site about 5,000 solar companies in the USA employing about 100,000 people.

Who is benefiting from The Department of Commerce decision to levy a huge import duty on Chinese PV modules?

The main beneficiary appears to be SolarWorld, under whose influence The Department of Commerce apparently made its decision. As mentioned, this is a German company which raised money in 1999 in Germany and is listed on the German stock exchange. SolarWorld has some holdings in the USA. It wound up in financial difficulties in 2011 (its stock listed SRWRF:OTC dropped from $2,500 on Apr. 6, 2011 to $561 on October 05, 2011) and blamed it on the Chinese dumping solar cells and modules. To demonstrate the validity of its claim on October 19, 2011 it petitioned the US federal government to stop unfair trade by China’s state-sponsored industry. SolarWorld may have been saved by The US Department of Commerce.

In addition,US electric utilities may well be the biggest beneficiary of the US Department of Commerce ruling. This is because it will slow down the need for them to change their business model. As I argued in a previous paper for Energy Post about the German utilities (“The future of the large German utilities: it’s already here” November 11, 2013), the solar revolution is forcing utilities to re-invent themselves, which is inevitably a painful process. Some have already embraced the decentralized, renewable energy future, but others are trying to resist it. They prefer to slow down the solar revolution as much as possible

Who is not benefiting?

As Mr. Resch makes clear, the US solar industry is not benefiting from The Department of Commerce decisions.

In addition, the people of the USA, the consumers as well those looking for a job are also absolutely not benefiting. As a matter of fact they are the big losers.

As of the argument about job losses, the Department of Commerce should have known that PV cell and module manufacturing is by now a highly automated process requiring relatively few people, while the manufacturing of supporting elements, electronics, electrical interconnections, installation and maintenance offers many more jobs. If the manufacturing of solar modules for a 10 kW rooftop system requires 1 worker for a certain amount of time, the design of the system, manufacturing the BOS (balance of system), installation and maintenance will require about 3 or 4 people. This means that imposing a higher duty increases the price of the system and therefore fewer houses will be equipped with solar. The result of The Department of Commerce’s decision will be to reduce job creation in the USA.

This means that instead of raising import duties The Department of Commerce should let PV modules into the USA free of duty. This would result in more job creation.

I would like to add one more point that is rarely discussed.

As mentioned SolarWorld is a German company, and most of its capital was raised in Germany. On the other hand most of the Chinese PV manufacturers built their production facilities with mostly on US money and are listed on one of the US stock exchanges. How did that happen?

What nobody talks about is that eleven Chinese companies raised over 2.1 billion dollars of capital on US stock exchanges during the years 1997 to 2010. The miraculous ascent of the Chinese PV industry started when this money was raised for them by the most prestigious US underwriters Morgan Stanley, Credit Swiss First Boston, Goldman Sachs, Merrill Lynch, Lazard, Piper Jeffrey, and CIBC World Market. Ownership in these Chinese Companies mostly by US investors ranged from 5 to 90%. Compare that to the fact that during this time only two successful US solar companies were able to raise a total of $545 million (Let’s forget about Solyndra which was able to raise $1.2 billion but was uncompetitive).

The result of the investment in the Chinese PV manufacturers from the US and from other (e.g. UK , Hong Kong etc.) stock markets resulted in the establishment of brand new automated turnkey manufacturing facilities in China. The result can be seen in the following chart: 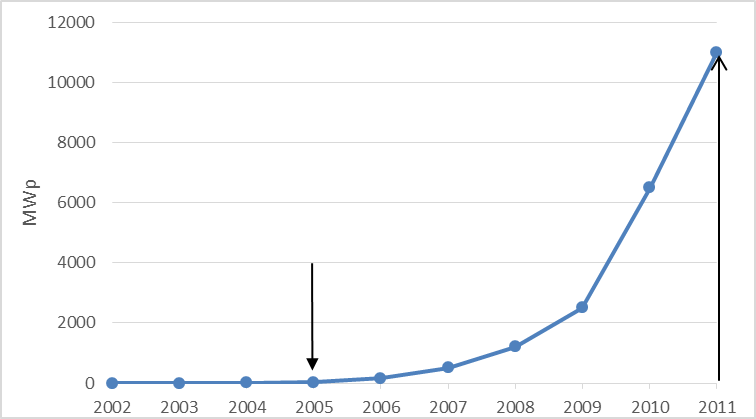 How was the Chinese PV industry which from 1970 until 2005, for 35 years was not able to produce more than 1% of the total World PV production, but was able 6 years later in 2011 to produce close to 50% of the world’s production of good quality PV products? This was only partly achieved because of the huge capital influx.

In retrospect it is obvious that the Chinese PV industry had a large overproduction in 2011 and 2012 and wound up with large unsold inventory which they wanted to get rid of. It is very likely that the Chinese PV industry was heavily subsidized and sold PV modules at a price, below cost. Because of my long experience in PV I was able to collect information and explain this in my recently released book on the history of solar PV: “Sun Above the Horizon” (which can be ordered from Amazon).

But should we be concerned about this?

First of all we should take advantage of the Chinese government’s generosity in subsidizing US homeowners, corporations and IPPs to install non-polluting clean electricity energy sources and also creating jobs in the USA.

It is understandable that SolarWorld was concerned to try to explain to their stockholders their financial difficulty.

In this article:Department of Commerce, SolarWorld, usa