Note: the hypothetical question as asked on Quora was a bit more… hypothetical. It was: If all cars in the US suddenly become electric, how much more electricity do we need to produce (in percentage)?

Here was my response:

It’s an interesting question, but also a question that seems much simpler than it actually is. As Ryan has done, you can use some static assumptions, plug in some numbers, and come up with a guess… but that approach is going to end up way off in reality.

Frankly, I’m not going to spend my evening trying to come up with an actual % for you. An evening wouldn’t even be adequate. This is a full-scale research project, or even many research projects. But I will contribute some of the things that should be considered.

Time of charging (which is most often at night, when baseload power plants that can’t quickly shut down or start up are still running without need; and when wind farms providing cheap & clean electricity are most active) is a very important matter. Nighttime charging is currently so irrelevant to grid operators, or even helpful in some cases, that many people on a time-of-use pricing system end up spending less on electricity after getting an electric car.

As EVs become more common, demand for charging in the middle of the day (while people are working) will become more of an issue, but this is sure to coincide with a much larger % of our electricity coming from solar power. As we get to that point, we start getting an imbalance in the middle of the day between solar electricity generation and actual demand. However, charging for EVs can help make that overgeneration useful! We’re already seeing wholesale electricity prices in Germany & Australia come down to middle-of-the-night levels due to relatively high (compared to the rest of the world, but not compared to the future) penetration of solar. Below is a graph depicting that potential overgeneration point a bit (via RMI — Renewables’ Bird Problem). 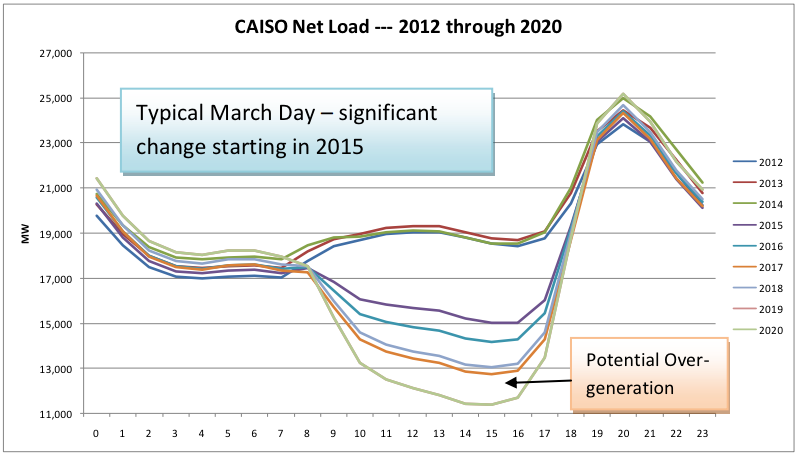 So, again, EVs could help to make use of overgeneration we’ll have anyway.

Another factor is how much EVs actually stimulate the purchase of distributed solar power systems, increasing clean electricity supply in a rather unique way through private investment. ~39% of EV owners in California have solar panels, an astoundingly higher % than in California as a whole — of course, that’s correlation, not causation, but just saying. Only anecdotal evidence, but I have heard from many people who were getting or got solar power because they had bought an electric car. (39% Of California EV Owners Have Solar Panels (Infographic))

Yet another very important factor is the degree to which owning an EV gets people to become more energy efficient (both while driving and with home electricity). I’ve seen HUGE anecdotal evidence that EV owners become much more energy efficient, and is simply common sense. People think about electricity use much more, and often because they think they will use much more electricity to charge their car than they actually will. Again, I have heard from many EV owners who have seen their electricity bills go down after getting an EV simply because of TOU pricing. I’ve also seen some claim that switching out the light bulbs to CFLs or LEDs (and presumably cutting electricity use in some other ways) at about the time they got their EV resulted in them using less electricity with their EV than they were before they bought it! If that were the norm, of course, we’d see a reduction in electricity use. I’m sure it’s not the norm, but it’s a very important fact to consider. I’m not sure if anyone has tried to scientifically quantify this, but I don’t think so.

As you can see, this is not a very black-and-white question. We need much more research on various factors as well as a crystal ball in order to really understand how an EV revolution will affect electricity demand. Frankly, we’ll never know for sure — it’s too complicated of a matter to come up with a very strong conclusion. However, I’m quite confident that researchers will try figuring out the details on many of the points above, and we may have some actually decent attempts published in the coming decade. We’ll see.

What is bugging me is why you asked this question. What is the overall purpose? To understand what we will need to do as the inevitable (in my eyes) EV revolution unfolds? To try to determine how much it’s worth incentivizing EVs? To simply stimulate conversation?

While we could evaluate the value of EV incentives to an extent, there are many factors related to a transition to EVs that go beyond “objective,” quantifiable analysis. This is a disruptive technology that will be driven by factors other than cost… er, in addition to cost. Was it important to ask how the transition to smartphones or tablets would affect electricity demand? If so, important to whom? And, if relevant, what effect did that question actually have on the rollout of these technologies? Was it important to go through the same process for the proliferation of home computers, TVs, gaming systems, larger refrigerators? Were similar questions important to the transition from horses and trains to automobiles?

It’s fun to ask questions about the future. It’s fun to plan. But for what purpose are you doing so?

Keep up with all the hottest EV news here on CleanTechnica. Subscribe to our EV newsletter or main newsletter to never miss a story.