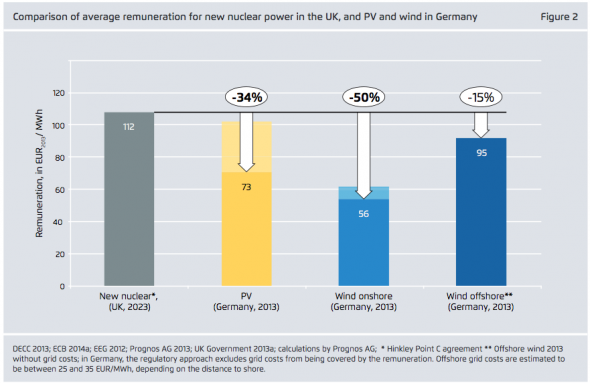 New-build wind and solar energy systems can generate electricity for up to 50 per cent cheaper than new nuclear power plants, a German study has found.

The research, commissioned by German think tank Agora Energiewende, compares feed-in tariffs for new nuclear in the UK with FiTs for renewables in Germany, and finds that nuclear and carbon capture and storage (CSS) – a technology not yet available in Europe – are both more expensive than wind and solar as energy strategies for preventing climate change. Released this week, the study also investigates the costs of “complete power systems” using natural gas power as flexible peak load back-up – something nuclear power plants need to achieve a generation capacity that makes them economically viable, and solar and wind farms need to make up for weather-affected intermittency. The study concludes that, “even today and under conservative assumptions,” a reliable power system based on solar PV, onshore wind and gas would be around 20 per cent cheaper than a system based on nuclear power and gas – a cost gap that was likely to widen as renewables became even more competitive.

Interestingly, the study does not even bother comparing a power generation system with high shares of coal or gas CCS – the energy mix Australia’s federal environment minister has put his weight behind – due to cost comparisons “clearly showing” it is “even less competitive (than nuclear) in comparison to PV and onshore wind.” (See chart below.) As an analysis of the report points out on the Agora Energiewende website, the “drastic declines” in the costs of power from wind and solar PV can be attributed to two decades of technological advancement, with feed-in tariffs for PV falling by 80 per cent in Germany in the past five years alone. Says the report: “New nuclear power is remunerated with a constant payment of €112/MWh (2013 prices) for 35 years. In contrast, large PV in Germany receives €96/MWh at the beginning, which declines to €57/MWh in the last year of operation. Similarly, onshore wind in Germany starts at €73/MWh and decreases to €44/MWh.

“Overall, Figure 1 shows that PV and onshore wind remuneration in Germany is considerably lower than the remuneration paid for new nuclear power in the UK, even without taking into account further cost reductions for PV and wind that are likely to occur due to future technological learning effects.”

The new findings come at a time when nuclear, coal and gas come under increasing economic pressure in Germany and other parts of the world. As we reported last month, German energy giant Eon reportedly wants to bring forward the shutdown of its Grafenrheinfeld nuclear plant to spring 2015.

Nuclear and fossil fuel plants are being squeezed out of Germany by renewables, wrote Craig Morris on RenewEconomy, with RWE recently announcing plans to close one of its gas turbines near Emsland because of all the solar power being generated in the region.

Meanwhile, in Australia, the government looks to be eyeing nuclear power as a clean energy option for the country’s future, alongside its dreams of abundant “clean coal.”

Last year, an issues paper released ahead of the Abbott government’s energy white paper noted that slow development in carbon capture and storage, and difficulties with hydro, meant nuclear technologies continued “to present an option for future reliable energy that can be readily dispatched into the market.”

And Dick Warburton, Abbott’s hand-picked head of the federal government’s RET review panel, has revealed himself as a big fan of nuclear energy, describing it once as the only alternative to fossil fuel generation.

In an article published in Australia’s Quadrant magazine in 2011, Warburton and his c0-author wrote that “except for nuclear power, there are no straightforward strategies for reducing dependence on fossil fuels without large economic costs.”

It’s a slightly different view from that of the executive director of Agora Energiewende, Patrick Graichen, who argues that the winner in the battle over the cheapest means of CO2-free power generation has been decided.

“In the future wind and solar will play an ever greater role in countries across the world as a source of power,” he said.

“Together with other countries and regions taking the lead on preventing climate change, Germany has an opportunity to showcase how stable and cheap power production can be based on wind and solar.”