The IEA’s annual World Energy Outlook (WEO) is seen as the most authoritative set of energy scenarios in the world. Yet when we test the forecasts for the growth of renewable energies in the WEO’s main scenario against reality, we find that the WEO consistently comes out too low. Each year from 2006 on the WEO has had to increase its forecast for wind and solar power. Yet each year the WEO predicts the growth of renewables to level off by 2020, for no clear reason. This sends a wrong message to policy makers about the real potential of renewable energy. It is time for the IEA to acknowledge that its assumptions need correcting.

Every year in November, the International Energy Agency publishes its annual World Energy Outlook (WEO). It intends to show the possible directions for our global energy system, with the goal of guiding policy makers in designing their policies and measures. The World Energy Outlook is the most authoritative scenario exercise in the world, and is seen as such by policy and decision makers. It’s not a prediction of the future, but a sketch of possible pathways. The fact that the WEO appears every year makes it possible to assess how well it forecasts the development of renewables in the various scenarios.  Looking back is not a favourite activity of scenario builders – they prefer to look forward. But it is instructive if you want to evaluate how well the scenarios hold up against reality.

As it happens, the IEA has a sub-programme for Renewable Energy Technology Deployment, IEA-RETD, supported by eight IEA country members, which carried out a limited assessment of the WEO-2013 and earlier editions. The results are very interesting. First the good news. In general, the scenarios are of high quality. That is to say, they generally pass the recommendations made in the IEA-RETD’s scenario guidelines (called “RE-Assume”), which were published last summer and which show policy makers how they should understand energy scenarios and transpose their conclusions into policies. The WEO does well by most criteria, e.g. on transparency.

This implies that policy makers should take to heart the WEO’s main conclusion regarding climate change policies: We need to take action that goes much beyond current policies to get anywhere near a safe pathway with respect to energy security and climate change. But the next question for policy makers is: What actions should that be? Here the bad news emerges. The WEO does provide clues about how renewable energy could contribute to the reduction of CO2 emissions, but these clues are absent in the WEO’s main scenario (the “New Policies” scenario). The assumptions about renewable energies used in this scenario and the modelling are based on misconceptions.

We constructed some graphs showing the cumulative installed capacity of both solar and wind power forecast by the WEO from 2006 to 2013. As shown in the graphs below, every year the WEO adjusted its assumptions upwards. In each year from 2006, the reference scenario in the WEO shows higher cumulative capacity than the year before. 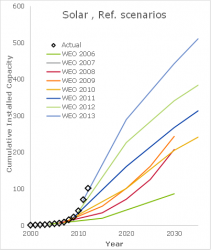 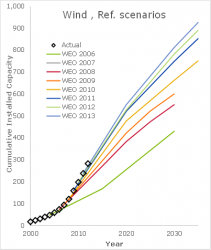 What is more, in all the WEOs the growth is expected to slow down from about the year 2020, but for no obvious reason. Our findings confirm what Terje Osmundsen recently wrote in Energy Post about how solar power is portrayed in the WEO. In wind energy the WEO’s adjustments are quite large as well. Hence, it’s not a wild guess that — unless something fundamentally changes — the 2014 WEO reference scenario will again show an upward adjustment of the growth in renewables towards 2035.

The WEO’s New Policies Scenario describes the mainstream developments in global energy. These developments put us on a track for a disastrous global warming of more than 3.5°C, according to the WEO. The globally agreed (but not yet operational) target is an upper limit of 2°C. Hence, the IEA also publishes an ‘alternative’ scenario, which shows what actions should be taken to stay within the 2°C limit. This so-called 450 scenario, named after the upper limit of the CO2 concentration in the atmosphere (450 ppm) that still provides a reasonable chance of staying under a 2°C average temperature increase, is regarded as possible but not very likely to happen. According to our retrospective, especially from 2010 onwards, the alternative, 450 scenarios have been much more representative than the reference scenarios when it comes to the actual development of wind energy (and to a lesser extent, of solar power). As can be seen in the graphs below, the projected growth lines quite accurately follow the actual developments. 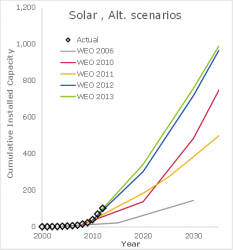 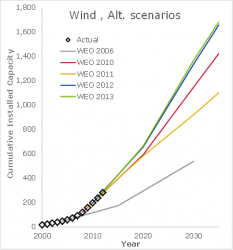 Unlike the reference scenario, the 450 scenario shows an increased growth of the cumulative installed wind and solar power capacity, starting from 2020. Obviously nobody knows for sure, but such an upward bend in the graphs seems more what one would expect from energy sources that will have gone further down the learning curve and the cost curve. What we can say, then, is that the WEO in its New Policies scenario in effect treats renewable energy technologies as a ‘black swan’, whereas in reality their development is quite stable and consistent.

Presenting the New Policies scenarios — including its unrealistic assumptions on renewable energy — as the reference scenario inevitably affects policy makers who will base their measures and policy designs on the WEO. The IEA itself in its policy recommendations does advise policy makers to eliminate fossil fuel subsidies to create a level playing field for renewables. However, in its WEO the IEA seems reluctant to fully explore the realistic opportunities that present themselves in the 450 scenario. It insists on presenting the New Policies scenario as the central one. This makes it seem as if the ability of renewable energy to contribute to lower CO2 emissions is less than it actually is.

Another problem with the WEO’s main scenario is that it insufficiently takes into account the value of things like jobs, environmental damage, health effects, security of supply and household energy bills, all of which are quite important for policy makers. For instance, the negative impact of CO2 emissions on climate-related aspects is expressed in the price of CO2 assumed by the scenarios. The New Policies scenario assumes a price of € 20 per tonne by 2020 and € 40 by 2035. These prices are a lot lower than the actual costs of externalities. This choice directly impacts the relative economic position of renewables compared to fossil fuels in the scenarios. By contrast, the CO2 prices in the 450 scenario (increasing to € 95 per tonne in 2030 and € 125 by 2035) are much more representative of the real externalities. One may argue that including externalities would create an exotic economic basis for the scenario modelling. But to a limited extent, including externalities is actually already happening in real life. New fossil-fuelled and nuclear power plants already are more costly than older ones, mainly because they have to be compliant with higher environmental and safety standards. This can be regarded as a way to prevent part of the external costs mentioned above. Leaving out the full external costs stacks the odds against clean technology.

Scenarios don’t create their realisation on their own. As the WEO confirms, scenarios can only come to real life with the support of policies and measures.  Policies are absolutely crucial for creating the level playing field for renewable energy sources, including externalities and harvesting the benefits of new energy systems. Nevertheless, modelling a 2°C pathway on realistic assumptions will be instrumental to designing and implementing the right policies. Moreover, if the World Energy Outlook would present a reference pathway that shows larger contributions from renewable energy on realistic grounds, policy makers have the IEA’s authority to rely on when proposing policies. It is time for the WEO to leave this beaten path of describing global mainstream thinking and to provide more realistic perspectives for policies that follow a 2°C pathway. Transposing some of the realism from the 450 scenario to the WEO’s main scenario would re-establish the WEO’s status as a realistic vision and would provide policy makers with a clear view on which sustainable pathways to follow.

Don't want to miss a cleantech story? Sign up for daily news updates from CleanTechnica on email. Or follow us on Google News! Have a tip for CleanTechnica, want to advertise, or want to suggest a guest for our CleanTech Talk podcast? Contact us here.
In this article:IEA, Renewable Energy Market, World Energy Outlook