Sunible, a company started by solar market data resource PV Solar Report, has a report on which California cities are installing the most solar power. Completely in line with the what I wrote yesterday when discussing California solar leasing, and the day before when discussing the $34,260 or so in savings that an average California solar homeowner can enjoy (over 20 years), the report found that it’s not just the rich who are going solar anymore. Many households with average incomes are also now going solar, especially through solar leasing.

The cost of solar is so much lower than it was even 2 or 3 years ago that many people have realized it’s not great for their pocketbook if they switch to solar power. $0 down or close to $0 solar leases also don’t hurt.

“Many of the leading Solar Cities in California are median-income communities like Fresno, Clovis, El Cajon, and Chico,” Rosana Francescato of Sunible writes. “According to the most recent census data, Fresno’s median annual income was just over $41,000. Yet Fresno is near the top of the Solar Cities list, at #3 in installs for Q1 2013.”

Given that about 75% of new California solar homeowners choose solar leasing over ownership, it’s also not surprising that the top solar cities in California are also places where solar leasing has seen the strongest growth.

“In the cities with the most solar growth since 2008, TPO solar has increased substantially — an average of more than 104% from Q1 2012 to Q1 2013. In that period, the city of Chico experienced a 153% increase in TPO solar installations.”

Before rolling out the Top 25 California Solar Cities list, check out the following infographic, which Sunrun put together to display the rapid growth of solar in inland cities with median incomes… despite decreasing government incentives for solar: 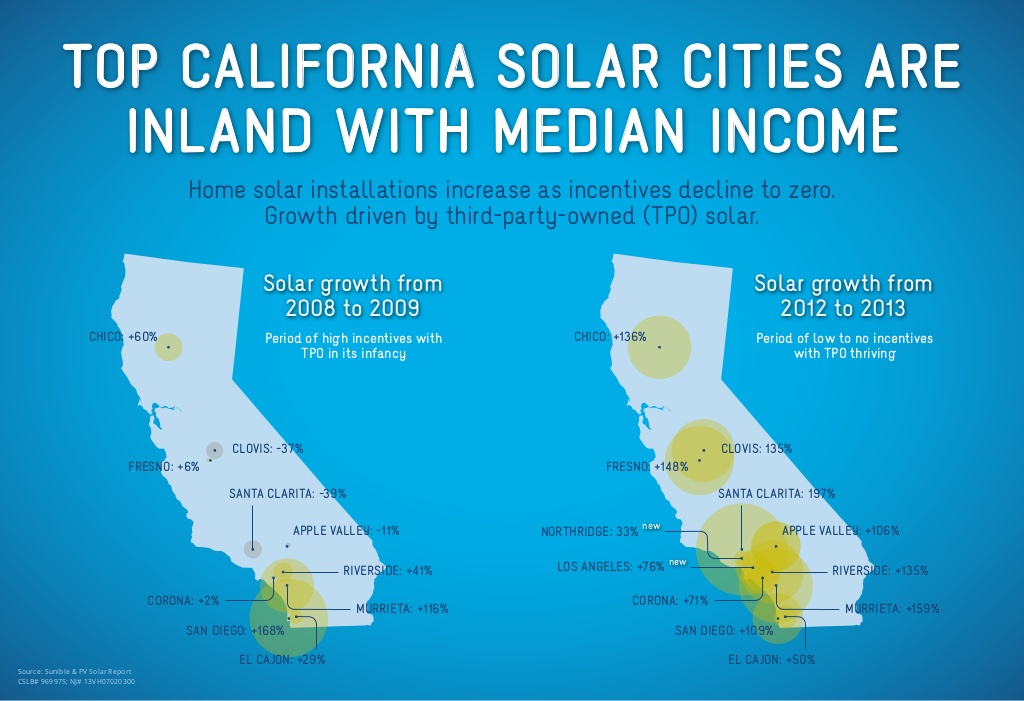 It’s pretty clear — if you live in California and you own your roof, going solar is a no brainer (unless you’re insane… or have some unique issues with your roof that make going solar impractical).

Join the solar rooftop revolution! Just do it!

Now that we’ve done our best to get you to do the obvious, here’s the Top 25 California Solar Cities list for Q1 2013:

Don't want to miss a cleantech story? Sign up for daily news updates from CleanTechnica on email. Or follow us on Google News! Have a tip for CleanTechnica, want to advertise, or want to suggest a guest for our CleanTech Talk podcast? Contact us here.
In this article:California, california solar leasing, cost of solar, PV Solar Report, Solar Leasing, solar leasing california, sunrun