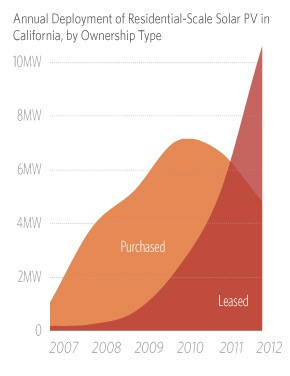 The report comes to a number of interesting findings, but the finding on the shift from solar ownership to solar leasing is probably the most interesting. In 2007, only 10% of California homeowners were going solar through a solar panel leasing arrangement. The shift to over 75% solar leasing in 2012 is clearly significant.

As I just noted the other day, there are some huge reasons why California solar leasing (and solar leasing in other states where it’s available) has taken off — primarily, people love $0 down payments and financial savings from Day 1.

People are going solar for financial reasons more than anything else. Many people could probably save much more money down the road by purchasing solar panels (or, at least, their families could… if they don’t outlive the long lifespan of increasingly efficient solar panels). But waiting several years to get money back on an investment is not the route many people want to take. Who knows what will happen tomorrow?

So, at the very least, solar leasing companies are giving us a much better deal than utility companies offer. What is there to complain about?

The solar market is anything but stagnant. Due to solar energy’s many advantages (and lack of significant disadvantages), the market is growing fast, but the avenues along which it grows vary a lot from place to place… largely based on policies in those places.

California’s strong solar power growth has actually taken place “in the face of declining financial incentives for solar installations at the state level through the California Solar Initiative,” as the Climate Policy Initiative (CPI) notes. The California Solar Initiative (CSI) did a tremendous job stimulating solar power growth while solar panels cost a lot. However, a rapid drop in solar panel costs combined with remaining federal solar incentives has made solar even more competitive today without support from CSI than it was a few years ago with such support. And California solar leasing options have made the attractiveness of going solar without CSI support even more attractive for many people… well, over 75% of solar customers, according to the CPI study.

In actuality, right now might be one of the best times in the coming decade or so to go solar in California. Federal solar incentives are currently scheduled to expire in 2016. Solar panel prices recently fell through the floor due to economies of scale in manufacturing, oversupply of solar panels due to extreme ramp-up of solar panel production in China and other countries, and the cut-throat competitiveness that resulted. After the dramatic drop in solar panel prices mentioned above, supply has started to better match demand and prices have started to rise a little in 2013. Solar panel prices could fall again and go a little below where they were at the beginning of 2013, or they could rise a bit more — the future is uncertain. With costs near a record low, incentives still available, and solar leasing companies offering amazing 20-year leasing contracts, now is an excellent time to look into going solar.

But, as noted above, policies influence how people go solar, and how it would be best for you to go solar. Solar leasing is only legal in about a dozen states. And various states and municipalities have other solar policies that make other ways of going solar more attractive. For example, some states have “Community Solar Garden” legislation that makes community purchasing of solar power possible. Some municipalities have “PACE” legislation that allows you to go solar using a loan that you pay back through higher property tax payments. The practical result is very similar to that of solar leasing — you enjoy monthly electricity bill savings that outweigh your property tax increase, and you get to skip the high initial price of purchasing a solar panel system.

In this article:cost of solar

GTM Research predicts by 2023, 90% of all rooftop solar systems will include a battery storage component as homeowners opt to take control of...