You probably know which states have been strong solar growth states over the past several years — California, Hawaii, Arizona, New Jersey, North Carolina…. But below are 4 states and one city that are picking up some serious steam in the solar power arena (can I use “pick up steam” with solar PV?), and that you probably wouldn’t guess are primed to become solar leaders.

GTM Research, which revealed these at Solar Power International last week, has termed them “hidden growth opportunities.” GTM Research projects a total of over 1 gigawatt (1 billion watts) of solar PV demand in these markets between the second half of this year (2013) and 2016. That’s a lot. Solar panel suppliers are going to love these 5 markets.

So, let’s very quickly check out these hot (or soon to be hot) solar markets (in no particular order):

Not exactly the sunniest state in the US, state requirements that utilities get 1.5% of their electricity from solar power and 10% from distributed, small-scale power generation systems (systems 20 kilowatts or smaller, such as home solar systems), as well as net metering (which allows solar power producers to sell their electricity back to the grid at retail electricity prices) for systems up to 1 megawatt (MW) in size, could help boost Minnesota’s solar power capacity from about 13 MW today to about 450 MW by 2016. We’ll see….

Notably, for homeowners who go solar in Minnesota, you’re expected (on average) to get a 10% internal rate of return (IRR) on your investment, which beats the S&P 50-year CAGR of 9.9% — very, very good.

Virginia has low electricity rates and not the best solar resources around. So, how is this state showing up as a hot solar market? Well, a Virginia law, HB 2334, requires that Virginia’s large utility, Dominion Energy, implement a 50-megawatt PPA renewable energy pilot program. 50 megawatts is a sizable pilot project, and who knows what it might stimulate? Virginia also has net metering. Unfortunately, it doesn’t have much else going for it when it comes to solar power, except perhaps a lot of people who would like to rely on their own clean electricity source while also saving money. Those are a couple of big incentives, aren’t they?

How much will solar save you? Find out in about 60 seconds!

Yes, here’s the non-state. so, I’m sure you’re wondering: what does this little city have that so big to have put it in this list? For one, 2.5 percent of DC power must be from solar by 2023 (projected to be about 250 MW of power capacity). And the city has an undersupplied Solar Renewable Energy Certificate (SREC) market, meaning there’s a lot of need for growth there. Also, net metering in DC is allowed for projects up to 5 MW in size (quite large), allowing for more people to take part in (and profit from) relatively large solar projects, even “community solar gardens.”

Investing in solar in DC has a better average IRR than in any state in the US other than Hawaii. 20%! It’s almost a crime to own a roof in DC and not invest in solar power. Also, thanks to the city’s progressive net metering law, even if you don’t own a roof but live in DC, you can take advantage of that great IRR by investing in a community solar garden. Solar panel suppliers must be drooling looking at the DC market.

Louisiana has great solar resources, but almost no solar power installed. GTM Research seems to be hopeful that the market will wake up a bit down there in the coming few years. While there aren’t state requirements for utilities to increase their use of solar power, there is net metering and a state tax credit for solar panel installations through 2017. On average, the projected IRR for someone who goes solar in Louisiana is an extremely attractive 9.4%. It’s a no-brainer.

Another Southern state with little solar power capacity today and a lot of room for growth is Georgia. A few big new policies look to grow the solar market in Georgia considerably, even though solar leasing remains off the table legally. As GTM writes: “Demand for solar in Georgia will be driven by an attractive feed-in tariff and utility-scale RFPs for twenty-year PPAs. The Georgia Advanced Solar Initiative offers 13 cents per kilowatt-hour for distributed generation and 12 cents per kilowatt-hour for utility-scale solar.” Once those are in place, hold on to your hands, solar power installations are going to be flying into place all over the state. 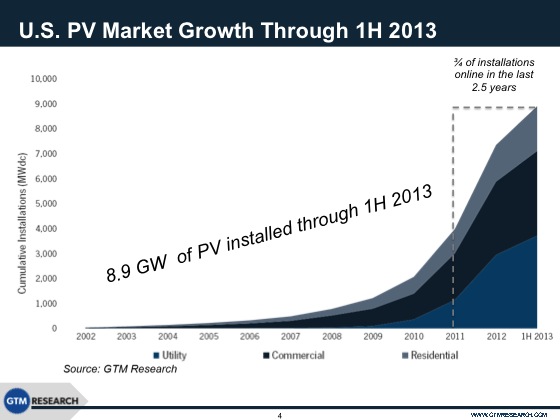 All in all, cities and states across the country are looking to see a lot of solar power growth in the coming years. ¾ of US solar power installations were connected to the grid within just the past 2½ years, ⅔ of solar PV panels shipped around the world by solar panel suppliers have been shipped just within the past 2½ years, and that pattern of rapid solar growth is expected to continue. Solar panel costs have dropped about 60% since early 2011. There’s no reversing that dramatic fall. The market is maturing, and as a market matures, costs come down.

The 5 markets above seem primed for much stronger solar power growth than they’ve seen so far. If you’re in one of these states or DC, you might want to have a look at the solar incentives that are available where you live. Or, even better, you can have us help you with that while you also get hooked up with a local solar contractor and get professional estimates of how much solar would cost you and how much more you could save by going solar.