“You’re going to see a transition from novelty, to granite countertops, to mainstream option,” Werner said. “We’re rapidly passing the equivalent of a ‘countertops decision’ to a ‘no-brainer.’ You just do it.” 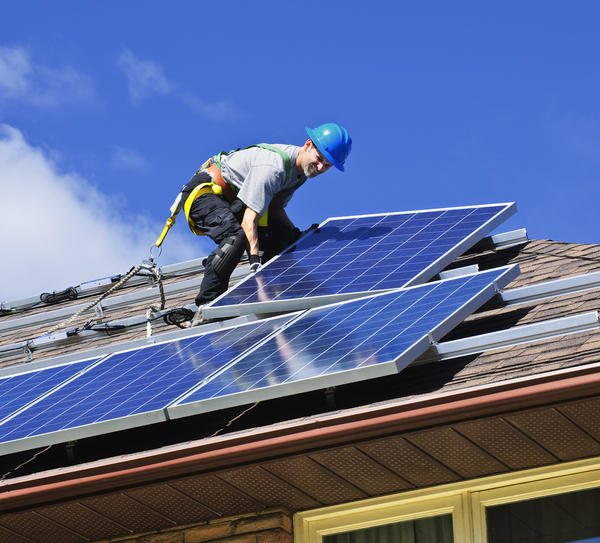 If, like me, you’re not that familiar with the granite countertop thing, Bloomberg notes that a lot of new home buyers have decided to pay $5,000 to $10,000 for a granite kitchen countertop that is expected to last longer than a Formica-style countertop and would also be made of natural materials.

The thing with solar panels is that you’re probably saving money from Day 1 if you incorporate the solar panel purchase into your mortgage. The solar panels will cut your home’s electricity bill dramatically. You may even get paid a pretty penny when you generate more electricity than you use. And installing the solar panels as part of new home construction is cheaper than adding them onto an existing home (approximately 20% cheaper). Like granite countertops, there is a financial benefit in the long term, but there’s also a financial benefit right from the beginning.

SunPower has now supplied over 10,000 homes with solar panels, and about 4,000 of those were built in California last year. Apparently, according to Werner, approximately 20% of all new homes in the state will include solar panels this year. And that percentage is only expected to go up in the coming years.

But perhaps the most exciting stats regarding all of this come from one of the largest roofing companies in the US, PetersenDean. Bloomberg reports: “PetersenDean installed photovoltaic systems on about 7.5 percent of the 100,000 roofs it built last year. CEO Petersen said he expects that figure to double this year.”

“We’ve picked up at least a dozen new subdivisions since mid-March, and all of them have incorporated it into the cost of construction,” Petersen noted.

California is clearly leading the way, but other states are up there as well, and California is actually just #6 when it comes to solar power capacity per capita. The story seems clear: solar power is the future.

The Republican Mayor of Lancaster, R. Rex Parris, who wants Lancaster to become the solar power capital of the universe, noted: “Economically, there’s absolutely no reason not to do this. Solar’s the only way to go.”

Indeed, in 13 states, investing in solar panels for your home is (on average) supposed to offer a better ROI than investing in the S&P 500. In 43 states, you get more money back than you would if you put that money into a 5-year CD. We recently found out that, for an average middle-class family that goes the solar leasing route (an extremely popular option where it’s available), the yearly savings come to approximately $600.

It will take some time for people to catch on to the financial benefits of going solar. But as more and more people do, home solar power growth will likely speed up. At some point, it should hit the disruptive technology “tipping point” that we’ve seen with many other technologies. We’ve seen it happen with cell phones, smartphones, personal computers, laptops, CDs, VCRs, DVD players, and much more. Solar panels will surely have their day in the sun. It’s only a matter of time. We’re already at the beginning of the steep growth curve.

Don't want to miss a cleantech story? Sign up for daily news updates from CleanTechnica on email. Or follow us on Google News! Have a tip for CleanTechnica, want to advertise, or want to suggest a guest for our CleanTech Talk podcast? Contact us here.
In this article:California, California Solar, lancaster, petersendean, Rex Parris, solar mandates, solar ROI, Sunpower, Tom Werner