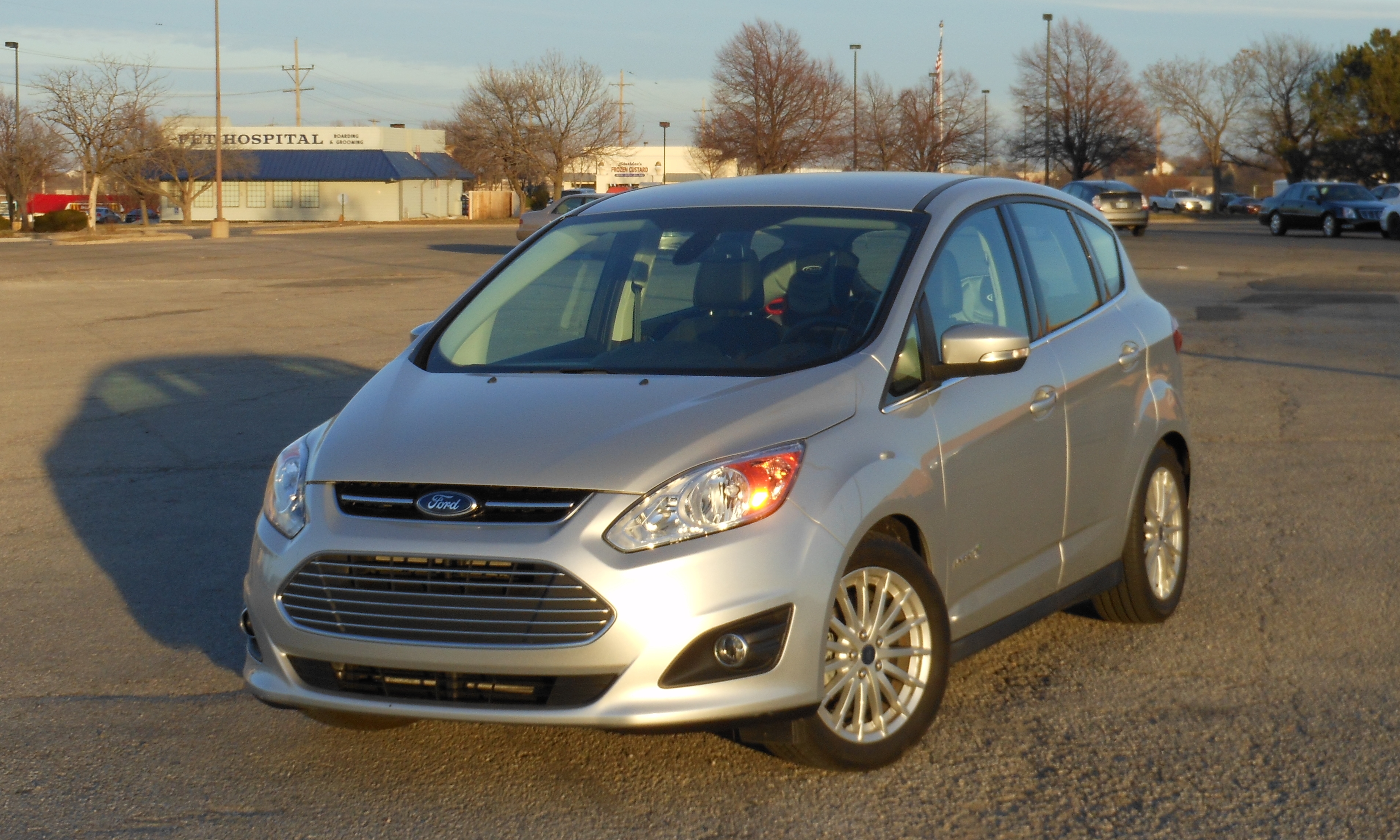 This article originally published on Gas2
by Christopher Tracy The 2013 Ford C-Max Hybrid is the first hybrid that I have spent a significant amount of time with.  My other experiences are an hour with a Prius and 3 laps of a test track in a Focus Electric.  I liked the Focus Electric and was underwhelmed with the Prius, but the C-Max has opened my eyes to hybrids!  I learned a lot about myself, my driving style, and what it means to be a hybrid driver slow.

The C-Max is not a big vehicle.  I would call it a compact hatchback, but Ford calls it a wagon.  The driver’s seat is comfortable, but the driver’s legs are trapped from either side by the center console and the door; both hard plastic.

There is adjustable interior lighting on the door handles, foot wells, and in the backseat foot wells.  My boys didn’t notice that I kept changing the color. Green was the best choice.  I like green and it felt appropriate as I was driving a “green” vehicle.

The backseat is spacious enough to fit two full size child seats comfortably.  There is not enough room for an adult to sit between the seats though.  Not an American adult anyway, maybe a small European lady, but then you have to explain to your wife why you have a small European lady in the back seat. *awkward* The trunk is spacious.  There is a three inch lip that sticks up at the bottom of the rear hatch. It does so because that’s where the battery is located.  If you just try to slide in your heavy load (hehe), then it will run into the lip and you and your friend will have to heave it up to finish loading.  The good news is that the rear cargo area is not thatbig so hopefully your load isn’t that heavy.  There isn’t any really bad news just that you might have to use a little more muscle, and that’s good for all of us. It looks great, but from the side it has an old school Prius vibe.  The tallest point of the car is located above the front row of seats.  Yes, I just compared it to the lackluster styling of the Prius…  But there are some redeeming factors.

The grill is exquisite.  It is very similar to the Fusion, the Focus, and the updated 2014 Fiesta.  I really like this grill and can’t wait to drive the Fusion for a week in April.  The grill on the C-Max also as the hints of Aston Martin design like the other Ford models, and I love it. The wheels on the C-Max seem like they have one thousand spokes.  I would prefer five to nine, but the SEL trim line comes with 15 spoke wheels. This car has a number of different display options.  Each has its own emphasis that will help you save the mpgs.  The one that I used the most was the graph that showed the mpgs over the last 30 minutes.  If all the bar graphs are above the average, then the average is increasing.  It gets difficult to keep all of the graphs above the average line because eventually you’re getting really good numbers.

The C-Max had the My Ford Touch infotainment system as an option.  This system has been much maligned by auto journalist across the board.  It’s not that bad.  There are other systems that I prefer, like Audi’s, but the My Ford Touch is usable. The “Sweep the leg, Johnny” trunk package was included on this C-Max.  I should find out what the real name of the package is, probably the tech package, but it’s just too much fun to make a Karate Kid reference.  I find the leg kick opening useful and convenient.  Sometimes tech options are on the vehicle because someone thought of them and the manufacturers says, “We can sell that.”  This option is actually handy and useful.

I took the C-Max with me on a school trip.  I loaded the back with a number of important Science projects that my kids had spent hours working to prepare.  The C-Max fit five in the rear hatch.  The kick to open feature was very helpful because we were always approaching the car with our hands full.  The kids were underwhelmed, but they’ve only known a world full of technology.

There are three power outlets in the C-Max.  There is a 12-Volt outlet on the front console near the buttons that control the rear hatch and another 12-Volt in the center console.  The second one is located next to the USB adaptor in the console.  I used the one in the armrest to power my boys’ after-market DVD players.

There is also an actual electrical outlet on the back of the console in the rear footwell.  Ford has been installing these on the last three cars I’ve tested for them.  The outlet comes in handy when you’re camera equipment isn’t fully charged on the way to a shoot.

When you turn the C-Max off, a trip summary comes up on the left information screen on the gauge cluster.  It tells you the stats from your last drive and the stats for the whole life of the car.  It also breaks down how many miles you just completed in EV mode and also what percentage of your regenerative braking was put back onto the battery.  Fun stuff.

I really like the way the C-Max drives.  I had to get used to driving with less of a lead foot.  If you apply too much pressure to the accelerator, the car ignores the electric motor and jumps right over to the gas engine.    When I was able to exercise some restraint, the electric motor would smoothly accelerate the vehicle up to an average of 30 to 35mph before the gas engine would kick on.

When the gas motor would engage the transition was seamless.  The first two times out in the C-Max I didn’t really notice the transition between the two motors.  Eventually I could sense the vibrations from the engine and would actually get irritated when it would kick on.  I wanted higher mpgs!

I didn’t make many driving friends in town during my time with this car.  To stay on the electric motor you have to be light on the accelerator.  During rush hour this meant slowly accelerating up to the speed limit.  I was a glacier off the line.  But my mpg’s improved throughout the week.

The sticker lists the C-Max at 47 city and 47 highway miles per gallon.  On the bone-chilling cold days of last week it was difficult and took some very conservative driving to get the C-Max up to 40 in the city.  I did take an 80 mile drive averaging 60mph on the highway and I averaged 49.4 mpg over that trip.  Not bad, but I still had to hyper-mile the C-Max to get this performance out of it.

Averaging 47 city and 47 highway means that the C-Max has a constant range of 634 total miles on a 13.5 gallon fuel tank.  I would be filling up every two weeks instead of once a week.  I would also only be purchasing 12 to 13 gallons of fuel instead of the 26 to 28 gallons I usually buy for the Denali.  If gas is $3.50 a gallon, then I’m usually spending $98 at the end of each week for a monthly total of $392.  Doing the same math for the C-Max, but only filling up twice because of the 600 mile range means the cost of fuel for the C-Max for the same month is only $91 or less than one tank for the V8 Denali.

The hybrid starts at $25,000 which makes my payment almost a reality.  To option the C-Max up to the SEL version I tested would make the price closer to $31,210…  A base SEL is $28,200 and the Equipment Group 302A package includes the Premium Audio & Navigation Package (My Ford Touch), the Hands-Free Technology Package, Power Liftgate, Rear View Camera, and Keyless Entry/Start/Tailgate for $2,215.  Some pricey options.

Too make the C-Max a financially responsible car for my family my payment would have to be less than $301 a month.  With a $5,000 trade-in and $1,000 down out of pocket; the payment calculator sets my payment for an SEL (optioned the same as the tester) at $461 for 60 months (5 years…).  Even a base C-Max with no options and the same trade-in value & down payment has the payment at still $368 for 5 years.  There is no C-Max that would save me money for the first five years.  That’s because my Denali is paid off.

I love our planet!  I want it to be here at least till we find another one close enough to cultivate for human existence.  I would be willing to trade-in my Denali someday, but not yet.  I love the C-Max and actually miss it at times.  I like paying attention to my driving style and the C-Max really helps you do that.  I wanted to keep it in EV mode and off the gas engine.  I bet in nicer weather I could really get those mpg numbers up there.  If the C-Max makes financial sense for you, then it’s definitely a hybrid to test drive.  I really do miss it.

Thank you to Ford for providing the C-Max.  It really is a fun  and useful hybrid.