A new report commissioned by the World Bank warns that our planet is on track towards a “4°C world” which will be “marked by extreme heat-waves and life-threatening sea level rise.”

“Lack of action on climate change threatens to make the world our children inherit a completely different world than we are living in today. Climate change is one of the single biggest challenges facing development, and we need to assume the moral responsibility to take action on behalf of future generations, especially the poorest.”

Furthermore, the report highlights the affect a warmer planet will have on global food stocks, suggesting that the adverse effects of a warming climate are “tilted against many of the world’s poorest regions,” liable to damage development efforts and goals.

“We will never end poverty if we don’t tackle climate change. It is one of the single biggest challenges to social justice today,” said World Bank President Jim Yong Kim on a conference call on Friday. 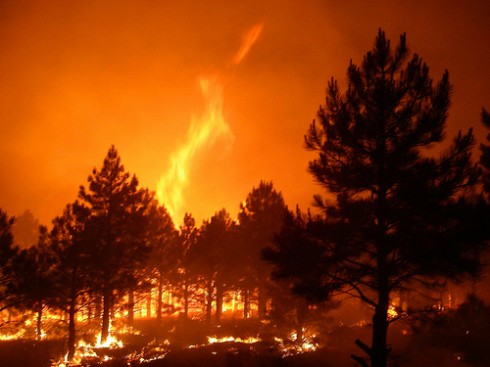 The report, “Turn Down the Heat: Why a 4°C Warmer World Must be Avoided,” has been reviewed by some of the world’s top scientists and is set for release ahead of the next comprehensive studies by the Intergovernmental Panel on Climate Change (IPCC) in 2013/14.

According to the World Bank, the report “combines a synthesis of recent scientific literature with new analysis of likely impacts and risks, focusing on developing countries. It chronicles already observed climate change and impacts, such as heat waves and other extreme events, and offers projections for the 21st century for droughts, heat waves, sea level rise, food, water, ecosystems and human health.”

“This report reinforces the reality that today’s climate volatility affects everything we do,” said Rachel Kyte, the Bank’s Vice President for Sustainable Development. “We will redouble our efforts to build adaptive capacity and resilience, as well as find solutions to the climate challenge.”

In what I must only assume is a clear and present attempt to smack the reality of the truth into readers, the World Bank concluded their press release warning us of just what we are facing:

Don't want to miss a cleantech story? Sign up for daily news updates from CleanTechnica on email. Or follow us on Google News! Have a tip for CleanTechnica, want to advertise, or want to suggest a guest for our CleanTech Talk podcast? Contact us here.
In this article:global warming effects, World Bank, world bank climate change

A common talking point in political circles is that climate action costs a lot. Even among proponents of strong climate action, there is a...

In part one of this two-part examination of global warming, we presented evidence that global warming has caused unprecedented melting of ice on Greenland,...

The true "social cost of carbon" is more than double earlier estimates — with even just an updated accounting of the agricultural sector on...