Why Your Business Should Care About the Birds, the Bees and the Burrs

“Necessity is the mother of invention,” according to a well-known proverb.  Those words seem particularly apt in today’s world of environmental, political, and economic pratfalls.  Fortunately, Mother Nature holds many of the answers to our most basic questions regarding design and equilibrium.  Internationally-known scientist Danya Baumeister will make the argument Oct. 15 at the BuildGreen Conference in Philadelphia that many savvy researchers, designers, and manufacturers would do better to leave the lab and look instead at the 3.8 billion years of evolution everywhere around them.  Baumeister is hardly the first to view the world as an R-and-D goldmine – one that could bring us new products, designs, and services to help both our environment and economy – but she is one of today’s leading biomimicry proponents.  And if you think biomimicry is a new idea, think again.

Biomimicry, according to the Biomimicry Guild that Baumeister co-founded in 1998, is “an innovation method that seeks sustainable solutions by emulating nature’s time-tested patterns and strategies, e.g., a solar cell inspired by a leaf. The goal is to create products, processes, and policies—new ways of living—that are well-adapted to life on earth over the long haul.”  Leonardo da Vinci, one of the world’s all-time inventive geniuses, is among the best known early adopters of biomimetic design.  His study of bird wings was a driving force behind his efforts to create a flying machine.  Eventually the Wright brothers picked up where Leonardo left off, an idea that finally took flight.  George de Mestral does not have the same name recognition, but most of us are familiar with his invention: Velcro.

Perhaps today’s most ubiquitous example of biomimetic design, the Swiss engineer was inspired to create Velcro after going hunting one day and wrestling with the burrs stuck to his dog’s hair and his clothes.  Under the microscope de Mestral observed the tiny hooks on the end of the burr’s spines that caught anything with a loop – such as clothing, hair or animal fur.  Thus was born the two-part Velcro fastener system, which places hooked materials opposite a loose-looped nylon weave that holds the hooks.  But we’ve only just begun to tap the natural world’s trove of inventive solutions.

The pioneering approach of biomimicry is bringing more biologists to the table when companies and researchers tackle design problems.  How do we create more efficient windmills?  As it turns out, the tubercles on humpback whale fins already offer an answer.  How do we make non-toxic paint?  Ask a peacock, who doesn’t use pigment, but utilizes structure and light to create color.  Trying to avoid extreme weather?  Rapid response systems to flooding caused by heavy thunderstorms could be based on bees.  The insects’ highly sensitive responses to electrical discharges in the air before a summer shower help bring them back to their nest before a downpour.

In this article:Biomimicry, biomimicry, Philadelphia, velcro 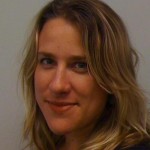 Heather Shayne Blakeslee is the Delaware Valley Green Building Council’s Programs & Advocacy Director. Her nonprofit administration experience has stretched over a more than a decade in areas that span the arts, healthcare, social justice, and green building and sustainability advocacy. At DVGBC, she directs the organization’s education programs and its efforts to advocate for effective and comprehensive green building policy and building codes to all levels of government in the Delaware Valley region. Blakeslee is a steering committee member of Philadelphia’s Urban Sustainability Forum, the Philadelphia’s Green Economy Task Force, and is the organizational liaison to Philadelphia’s Mayor’s Office of Sustainability. What’s A Gas Utility Without Gas?

The Philadelphia City Council will hold a public hearing this week to discuss the future of Philadelphia Gas Works (PGW), the country’s largest municipally...