Experts estimate that the four largest clean-energy industries (solar, wind, biofuels, and fuel-cell) will have combined annual revenues of $255 billion by the middle of the next decade. The question isn’t whether the world will move towards cleaner living – the question is how soon this trend will take hold.

There is no better, more fertile place in the United States for green technology and green-collar jobs to take shape than California.

California’s challenge is competitiveness, grasping as much of the share of these markets as possible by being the industry leader in greenhouse gas abatement technology. To date, we’ve done a great job – California captured $6.6 billion in green capital between 2006-2008. And all these start-ups need workers; so green jobs have the potential to be for California what the defense industry was in 1980s.

That’s 125,000 people working on protecting our environment and earning family-sustaining wages at the same time. And all these new jobs came about before AB32 really kicked in! The potential employment upside to AB32 is staggering. Growth in green-collar jobs outpaced overall job growth nationwide by 250 percent – astounding.

Clearly, being on the cutting edge of innovation is a net positive for California’s economy, not a negative. As we mark the three-year anniversary of AB32’s signing today, we should acknowledge that its oft-vilified targets are not only achievable but also actually good for California’s economy. The Governor’s own Climate Action Team reported back in 2006 that AB32 would provide “billions of dollars in savings for businesses and residents, and tens of thousands of new jobs by 2020.” It’s both affordable and plausible.

We’re proving as much in San Francisco. Our Local-Global Climate Action Plan sets the ambitious target of reducing our greenhouse gas levels 20 percent below 1990 levels by 2012. Well, we’ve already achieved a 5 percent reduction below 1990 levels, and we’ve still got a few more years to get all the way to 20 percent…

Our focus on green industries has reaped benefits for our local economy. We have the eighth-lowest unemployment rate in California. New cleantech companies are opening their doors week after week.

We accomplished this growth by ensuring that our city offered an affordable business climate and the best-trained workforce in America. Much as we did in San Francisco, we need development policies that co-equally concentrate on growing business and developing the workforce.

California should explore the feasibility of two-year payroll tax exemptions for new hires in cleantech, modeled after the state’s existing hiring credits – instead of targeting groups of workers or areas, we’ll focus on hiring into industries. We need pointed business-attraction strategies to aid in the formation of cleantech clusters. Let’s be aggressive in pursuing green industry startups and companies looking to relocate.

I’m excited about the potential of the emerging green economy for California, both in economic growth through venture capital and entrepreneurship as well as the vast number of jobs we stand to create. I believe our fundamental and stark difference of opinion on AB32 merits a discussion in a public forum, so today I am inviting candidate Whitman to participate in this debate. I encourage her to accept so the voters of California can get a clear view of our positions on this vital issue.

At this critical juncture, we need leadership that’ll drive economic growth through green-collar industry development, not tired old jobs vs. the environment rhetoric that ignores the vast growth potential of cleantech in California. I look forward to pursue an ambitious green collar jobs strategy for the state, just as we’ve managed to successfully do in the City and County of San Francisco.

Have a tip for CleanTechnica, want to advertise, or want to suggest a guest for our CleanTech Talk podcast? Contact us here.
In this article:AB32, California, Gavin Newsom, Meg Whitman 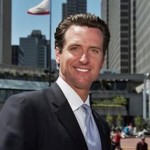 was the youngest San Francisco mayor in over a century when he was elected at the age of 41. Newsom, the son of William and Tessa Newsom, grew up in the San Francisco Bay Area. He attended Santa Clara University on a partial baseball scholarship, graduating in 1989 with a B.A. in political science. After only 36 days as mayor, Newsom gained worldwide attention when he granted marriage licenses to same-sex couples. This bold move set the tone for Newsom’s first term. Under his energetic leadership, the economy grew and jobs were created. The city became a center for biotech and clean tech. He initiated a plan to bring universal health care to all of the city’s uninsured residents. And Newsom aggressively pursued local solutions to global climate change. In 2007, Newsom was re-elected with over 73% of the vote. Since then he has built upon the successes of his first term, launching new environmental initiatives and a comprehensive strategy to transform one of the city’s most troubled neighborhoods into a life sciences, digital media, and clean tech center.