Tidal power isn’t really talked about a lot here in the U.S., but it’s always exciting when a fresh renewable energy technology enters the equation. To wit: Britain just launched a first-of-its-kind contraption that will generate tide power for the Isles.

This past weekend, a 122-foot, 1.2 megawatt upside-down-windmill-looking-thing headed out to sea from the same dock that built the Titanic. The device, called SeaGen, will make enough energy from tidal power to feed about 1,140 homes and is the world’s first commercial-scale system for making electricity from marine currents, according to the Independent.

Britain has some of the best water power sources in the world from both tide and wave energy. In face, some think those technologies could eventually power 20 percent of the nation.

SeaGen will be placed near the mouth of Northern Ireland’s Strangford Lough and will sit in tidal currents like an inverted wind turbine. Tides, rather than the wind, will turn it. Good tidal power sites are where the tides are forced to speed up because they are being forced through narrow channels.

In this article:Tidal Energy, UK 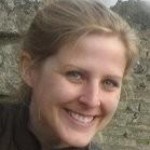 I hail from Saint Paul, Minnesota, home to a region full of renewable energy potential and innovation. A public relations professional by day and blogger by night, I have a background in energy policy and communications. I'm particularly interested in the private sector's leadership and innovations in renewable energy - I cover this in my personal blog, Maria Energia. I enjoy traveling, reading, downhill skiing, scuba diving, and anything related to food (growing it, hunting it, cooking it, eating it). Fun fact: I make a 2-second appearance in An Inconvenient Truth (at the 2 minute mark, I'm the girl who is riveted.)